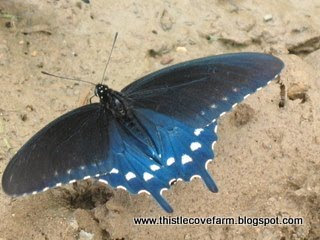 ~ Butterflies near the wildflowers ~
Post Script ~ In response to queries regarding “what kind of butterfly…” I believe this might be a Morpho butterfly, of the genus Morpho. Although the research I unearthed said this particular butterfly is found mostly in Mexico and Central, South America it certainly looks similar if not the same butterfly.

What do you think?

I’ve visited a butterfly farm in Aruba and found it fascinating. I’ll find those photos and do a blog post about the varying types of butterflies. There are also butterfly farms in the USA and some brides and grooms choose to release butterflies rather than throw rice or bird seed. A rather charming custom I believe and, depending upon the season, far more beneficial than rice and a lot prettier than birdseed! -smile-

When I stopped to pick wildflowers, I saw these butterflies at a mud puddle. While I don’t know, my guess is while they are supping water, they are getting minerals at the same time. They didn’t seem threatened by me, nor should they be, but allowed me to walk right to them, take my photos and then leave. Beautiful, aren’t they?! 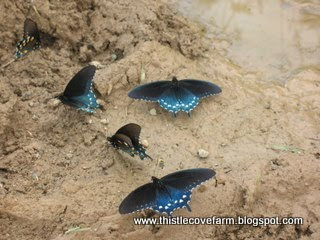 ~ A small group of butterflies, some flitted in the air, others rested, drinking from the puddle. ~ 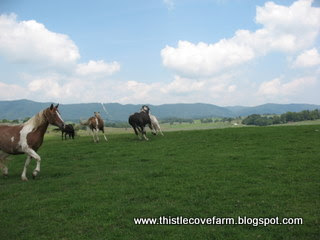 ~ The horses start their campaign for re-placement in the herd. ~

In the wild, stallions are kept in the herd for breeding and protection but it’s the mares who lead the herd. It’s the mares who decide where to settle for the night, where to foal…have their babies…, when and where to drink. It’s a matriarchal society and the stallions always defer to the mares. In my small herd of eight horses, there are two mares who vie for dominance…Peaches, the oldest, and Tumbleweed, the newcomer. Over the years, they have reached a somewhat easy truce with Peaches giving way to Tumbleweed as long as Tumbles minds her manners. If Tumbles gets out of line with the other horses, Peaches steps in and corrects the situation. If Tumbles starts picking on Dandy, Peaches will kick some major horse fanny; Dandy is Peaches’ favorite and there is NO picking on Dandy! 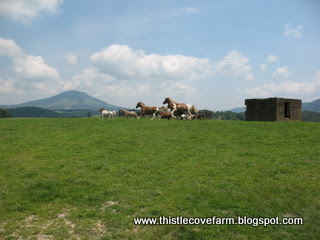 The herd chases each other around the round pen, first clockwise…~ 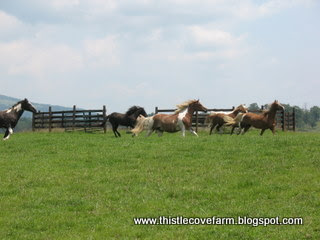 ~ …then counter-clockwise, in the upper pasture. ~
Lightly, the first horse born at Thistle Cove Farm, is an “easy keeper”. That mare could be fed bread and water and she’d gain weight, crying all the while she was being starved. She’s such an easy keeper, she has to be put in a smaller lot in late spring early summer so she doesn’t gorge, overeat, colic and founder. She’s foundered once in her short life and the outcome usually isn’t so good the second time ’round. All that to say, she and her brother, Dandy, have been separated from the other horses for a couple of months now. Dandy didn’t need to lose as much weight but it’s always best for animals, humans as well I believe, to be in pairs as they fare better emotionally.

I decided it was safe to let Lightly and Dandy join the herd, forgetting HayJ, the black and white gelding…castrated male…picks on Dandy, the other castrated male. HayJ is a American Curly cross Percheron and a big’un. He’s at least twice the size of Dandy, both in weight and height so it’s not a fair fight. Both Lightly and Dandy are the foals of Peaches and she takes up for both of them but Dandy especially. 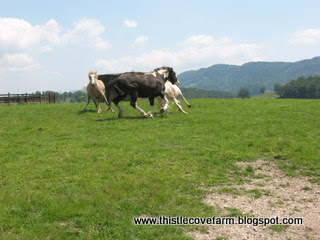 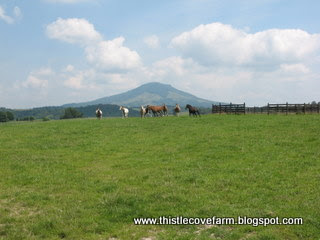 ~ The horses begin to settle down. ~ 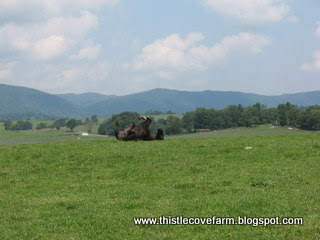 ~ Tumbleweed decides the excitement is over so it’s time for a back scratch. ~
Abbie, Sadie and Sam went with me to the upper pasture gate but I told them to stay behind the gate. Abbie will listen but Sadie and Sam are young yet, still headstrong and think they know best. I had the horse whip with me and it has a reach of about 15 feet. I don’t have to hit the dogs, all I have to do is whistle the whip over their heads and they run like the devil has been loosed on them. This is a good thing as it helps me keep them safe from a distance. Oh, don’t get me wrong…I’m not adverse to popping them with the whip…better a pop with the whip than getting trampled by a horse but as the whistle of the whip still works, they are saving themselves the actual physical pain. The same premise works with the horses; they detest the whistle of the whip and will turn and run the other direction. This is good, especially when it’s me and me alone standing in the field and they are running full tilt boogie toward me. There’s no way I can hold my own with one horse, much less eight of the beasts.

I earned my supper tonight but the soup is a bit different this time. 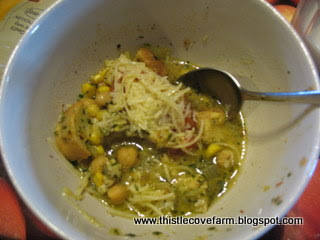 Oh, it still has garbanzo beans, tomatoes, artichoke hearts but I added some corn and saffron which gives it that lovely deep golden color. It was still served over home made croutons…this time cheese croutons…and topped with Parmesean cheese. I also stirred a spoonful of pesto into each bowl and, yes, it was BETTER than before! How can it be…but it was! I believe I could eat soup, at least, once a day and will freeze the leftovers for another meal another day.

For supper tonight we’re having fresh corn sliced off the cob, put into a bowl with salt, pepper and butter, sliced tomatoes with pesto and provolone cheese, and, for desert, sliced peaches with the banana walnut bread. We usually drink milk, sometimes I’ll have ice tea or water but that varies little. We don’t drink sodas and only buy them when company expects to drink soda; our limestone water is so sweet, it seems disrespectful to drink soda pop. How can God’s good water be improved upon? It cannot.

Any leftover corn will be made into corn chowder for tomorrow’s lunch or supper. 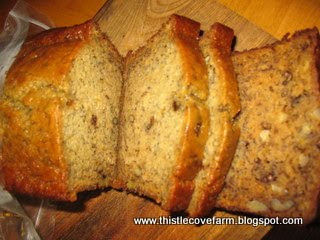 ~ Banana Walnut bread, sliced and ready for the toaster ~ 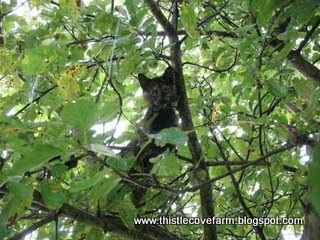 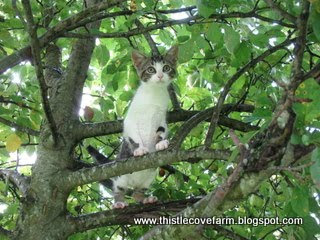 Miss Emma stays in during the night. Her cold is better, she’s still receiving Lysine twice a day and she’s improving, slowly. She’s a quick little thing, waiting at the door to dart out once the door has been opened for the dogs. The puppies take their time, as do the older dogs, when the door is open. They must reach out their muzzles first, testing the air, seeing if there’s anything worthwhile in going OUT, then, and only then, do they, sometimes, stretch a paw toward the porch. Most of the time, they need a little nudge in the nether regions to help them decide.

Today, Miss Emma, Miss Maggie and Miss Maddie, great friends three, chased each other around and around, up the fence post, into the apple tree, down the fence post, down the driveway to the barn…NO! You are NOT to go to the barn, the barn cats will have your guts for garters and may manage to chase you into the road. Not a good thing. Not a good thing at all! So, I allowed the dogs to “sort of” chase the kittens back up the driveway, towards the house and the kittens decided climbing the apple tree would be lots of fun. They look like little pixies as they chase each other around the tree limbs, although I couldn’t get Miss Maddie in the photo. Miss Emma and Miss Maggie are photo hounds…so to speak…and took up all the room in the image. 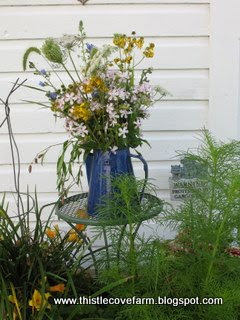 ~ Studio Wildflowers ~
Today the studio wildflowers include Queen Anne’s Lace as well as a bunch of other flowers I either can’t remember their names or don’t know their names. Still, it’s beautiful, isn’t it?

I’m sorry but I have to end on a sad note; today we say good-bye to Miss Kitty. The cancer is much worse and has spread not only to her bones, in the form of growths, but also to her organs, specifically her lungs. She’s begun to experience pain, is having difficulty breathing and, after thirteen good years, it’s time. Dr. Anne will be here sometime today and the injections will be administered and she’ll be laid to rest with all the other cats that have gone on before. It’s always sad to say good-bye but I try and focus on the good years and the fact she was saved from the side of the road where surely she would have been killed. Miss Kitty has been a good lap kitty and has even shared our bed this week. She has born well the indignities of various dogs sharing her space and my life. Yes, I do know she’s not a human but there’s no doubt in my mind she’ll be in heaven, with the others, waiting on me. Jesus’ lap will have to do until I go home. -smile- 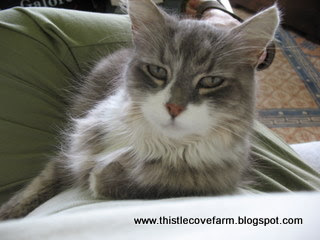 Share
Pin
Email
« Sabbath Keeping
A Weeks Worth of Work, Then Some! »