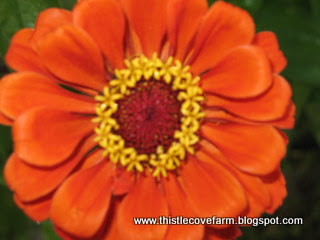 ~ Zinnia, one of God’s happy flowers ~

I’ve been absent for a few days so this entry will be long, a catch-up post, if you will. I’m in need of a seated rest period and updating my blog is one guaranteed way to grab some chair rest.

It seems like the more I get done, the more there is to do. Anyone out there experiencing the same? I’m sure most of you. There have been some fabulous blessings, orchestrated as only God can do; specifically I’m thinking of Kathy’s family. It’s been a frustrating, anxious few months for her i-friends and many angst filled years for her family. So many others are in need of prayer – Suzy as she leaves her home and moves to another state to tends to her aged Uncle’s needs. Her uncle’s bank in Nevada failed last week…the first of many, if the signs are to be correctly read…and he, rightfully so, is panicked. Uncle is a new, very new, Christian in his mid 80’s. Sharon’s aunt has advanced cancer as well as Ahzheimer’s and their family is caught up in care and concern. Betty, my cousin, is caring for her step-father in his last days. Betty’s mother, my mother’s sister, passed away last November, and her step-father has Alzheimer’s. These but a few and so many people needing prayer, needing the whisper of God’s voice in their ear.

I have a journal where I keep names of folks who have requested prayer and it seems the list grows at a much faster rate than it used to grow. One of my favorite hymns is “What a Friend We Have in Jesus” and one of my favorite lines of that hymn is “take it to the Lord in prayer”. Irish born author, Joseph Scriven, was to be married but on the eve of his marriage, his betrothed drowned. Grief stricken, he re-located to Canada where he devoted himself to serving the poor but if one could afford his services, he would not work for them. Some years after moving to Canada and serving the poor, he also died in an accidental drowning.

In three short verses he testify’s to the promises, peace, grace and mercy of Christ. Perhaps most of all, the peace.

I don’t listen much to popular music save Celtic, jazz, blues and female artists who are gifted song writers. Other than the aforementioned music, I listen to hymns, Gospel…but not Southern Gospel as I find it too too…if you know what I’m saying not very well -smile- and I listen to preaching. Also, I listen to audio books and enjoy them a lot as well. When I say I listen, in the main, to preaching and religious music what I’m really saying is I’m a pretty poor representative of Christ. If I don’t fill my head with the Good Stuff then the bad stuff tends to surface…more than it already does, I’m sorry to say. I’m not one of those “good people” people talk about. I need to fill my head with hymns, preaching, the whisper of God on the wind or in the lowing of the cattle, bird song, puppies and dogs, cats and kittens, horses and, in general, nature as served up by God. Yes, I do listen to popular music when I take Zumba but the words just aren’t as important as me as being busy trying not to stumble and die -smile-. After I take a Zumba class, yoga class is next and the instructor plays Celtic Women, Enya and the like so my head is filled with goodness when I leave the YMCA.

I’ve never understood folks who say, “I’m bored”; I think it shows a lack of imagination on their part. Thanks to Mama and Daddy, we were taught to entertain ourselves and if we couldn’t entertain ourselves, there were always chores to be done. Time was not to be wasted on “nothingness” as “idle hands were the devil’s plaything” as Mama always said. I still believe it although now I realize that restful periods aren’t the same as idle hands. I’ve also learned to “keep the Sabbath” apart from the rest of the week. Keeping the Sabbath holy is a mini-vacation, a gift from God at the end/beginning of the week that restores, renews, refreshes and lets me end one week and enter the next with a calmness that gives reflection on what has passed and focus on what is to come. 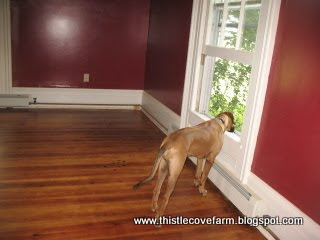 ~ Sadie, looking out of the dining room window. ~
We’ve been working on the house, getting that portion readied that was destroyed by the flood damage December past. I’m hopeful…always hopeful…we’ll be finished Soon. The dining room walls have been replaced, the floor has been refinished and we still have to hang a ceiling fan and clean before moving furniture into this room. The parlor is crammed almost to the ceiling with dining room furniture and “stuff” so neither room can be used for the time being. 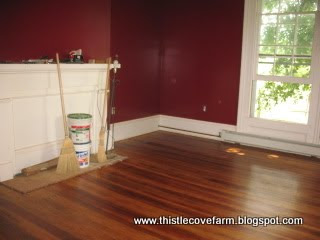 ~ The dining room had to be re-painted and floors re-finished. ~

The front porch is filled with tools that are going to be moved off the table today so we can go back to eating on the porch. What is it with construction folks? They just lay their stuff down any ole place, never considering if it’s in my way and this has been going on for a couple of months now. We only get to use the front porch in nice weather and frost is little more than two weeks hence; time is a-wasting for front porch sittin’ and eatin’! 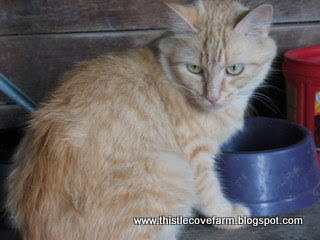 Mama Cat, four weeks ago today, had four kittens in the bottom of a fifty gallon barrel and it’s going to be hard getting them out of that barrel! I want to catch some of the feral barn cats and relocate them to the “animal shelter” so the tame kittens and Mama Cat can live in the barn. On a farm, it’s necessary to have cats to help keep down the rats and mice and it’s best if those cats are tame. Much easier to catch and vaccinate, etc. Mama Cat isn’t the prettiest cat but she does have one of the best personalities I’ve ever seen in a cat. No matter what life has thrown at her, she responds by being placid, quiet, accepting and looking for the good. I can learn from her. A lot. 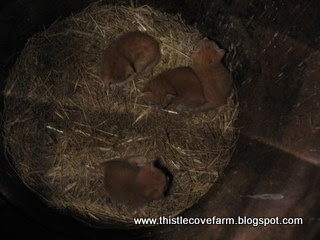 ~ Mama Cat’s four kittens at the bottom of a fifty gallon barrel! ~ 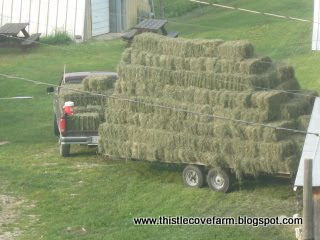 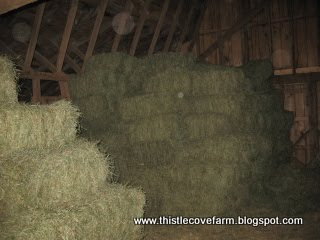 We cut, raked, baled and stored hay this week…363 square bales of alfalfa clover timothy mix and six round bales of same. Thank You, God…it’s dry from start to finish and animals now have plenty of hay for this winter. I’ve even some to sell!

I’ve nattered on with nary a word about puppies and dogs; will remedy that, hopefully, by Saturday.