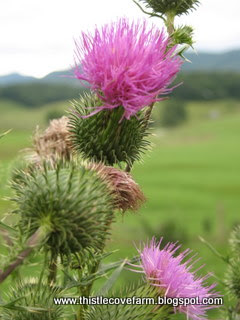 Sometimes we manage to miss a thistle plant, or dozen, but they are such beautiful flowers. I’ve read a weed is a flower one doesn’t want and while I would like to have a small garden of thistles, that’s nigh impossible as the stinkin’ things don’t know their place and want to take over the world not to mention this small farm!

We have a few pieces of Scottish Buchan Thistle Pottery and a lovely tea service as well. I bought the tea service at a thrift store, way back in 1981, far before I’d met Dave and we’d made our decision to marry, move to a farm and name it Thistle Cove Farm. Over the years, we’ve been given a few pieces of this pottery and I’d love to have an entire set. We’ve never bought a set of dishes, relying instead on the bits and pieces we each brought to our marriage as well as what Dave’s mother brought when she moved in with us in 2000. 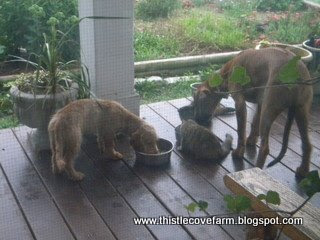 ~ Some mornings I put the puppies on the back porch to eat their breakfast. ~

Abbie and Gracie don’t receive as much food as the puppies and disagreemets tend to break out when Abbie and Gracie finish far, far sooner than the puppies. It’s easier to put puppies on the back porch and keep the older dogs inside. 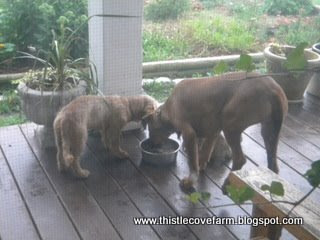 ~ Sadie Lady and Sam Spade are concentrating on one dish while the kittens have dipped into the other dish. ~ 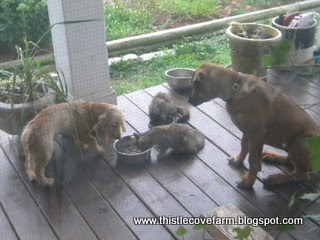 ~ Sadie Lady and Sam Spade watch, in amazement, as the kittens move in to claim both food dishes. ~ 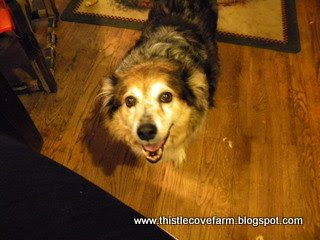 inside in the kitchen, looks beguilingly at me; she’s asking for either treats of the eating kind or the petting kind. She’d rather eat but will settle for love -smile-. She’s an old girl, somewhere around fourteen or older but was a rescue from the side of the road so her true age is known only to God. She’s been a great companion and will still, on days when she’s feeling particularly good, go to the barn for early morning chores. Usually, she’s by the hearth having a snooze, waiting for the next meal. 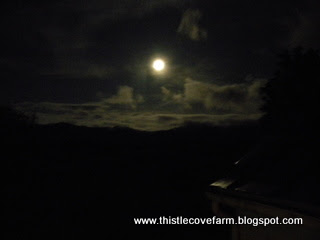 According to the Farmer’s Almanac, August is the Full Sturgeon moon because of the fishing tribes of the Great Lakes. Some tribes called it the Full Red Moon for the reddish cast through a sultry haze while others called it the Green Corn or Grain Moon. As we’re miles and miles from the Great Lakes and, according to my photo there’s no reddish cast, it will be known as the Green Corn Moon. 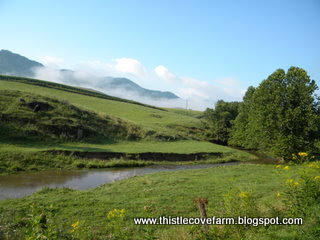 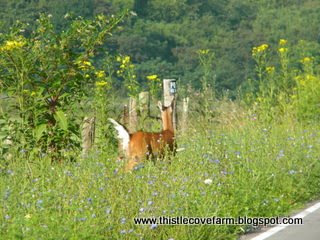 This white tailed buck came too close for comfort to my car when I was heading out of the valley. I slammed on brakes, he scampered to the side of the road and then bounded away. In this photo, it’s difficult to see but his antlers had new velvet; he is a beauty! 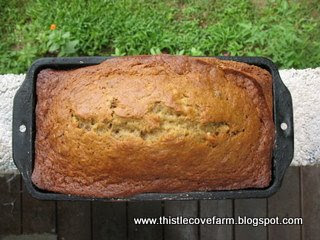 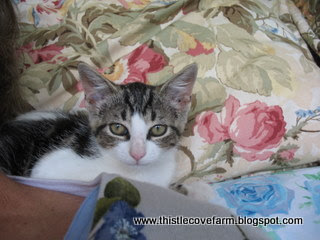 ~ Miss Emma is turning into a Fine Lap Kitty or, in this case, a Fine Shoulder Kitty. ~
She’s had to stay inside, due to her cold, but she makes up for lack of kitten playmate time by following me around and using me as her play pretty. In this, unusually, quiet, pensive moment she was resting on my shoulder as I listened to preaching on the radio. As I type this, she’s now in my lap cleaning her face. 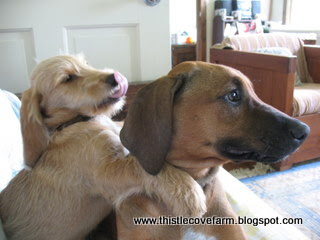 ~ Sam Spade and Sadie Lady romping on the sofa until Miss Kitty caught their attention. ~

Aunt Esther has always said, “for every fog in August, there’s a snow in winter” and every morning, thus far, we’ve had fog. By my count that means we’re expecting a bare minimum of seven snows this winter. 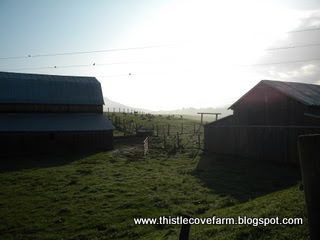 ~ After the fog burns off, we’re left with a beautiful sunrise. ~

You just can see the sheep on the hillside. This is where they, usually, spend the night although some nights they’ll come into the little lot just this side of the barns. I’ve never quite figured out how they choose where they will sleep and they’ve kept it a secret all these years.

The day after a festival is always a physical let down. It takes so much energy to, properly, work a festival, imo, and all that energy has to come from the store room. Today is being spent unloading the car, putzing around in the studio, cleaning the kitchen and, perhaps, going to Joann Fabrics just for a little zero time. When I work a festival, it’s show biz. By that I mean, people come to a festival to forget their troubles, have a good time, enjoy ??? -smile- festival food, look at the goodies, listen to fine music, see and be seen. They do not want to encounter someone with a surly attitude, listen to someone gripe, watch an altercation or, in any other way, have a negative experience. I enjoy people when it’s my choice -smile- and try and let their few moments with me be a positive experience, one to remember fondly, have a chuckle or laugh, be thankful they met me. 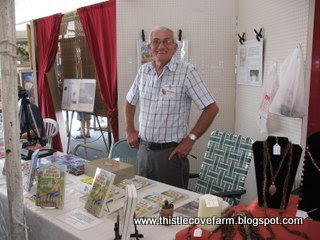 ~ James Campbell is a local author who writes of the old stories and ways he’s been told all his life. ~

It’s his way of passing along heritage, history and culture and he not only does a fine job as an author, he’s a really nice gentleman as well. He has a great smile, a ready laugh and is just as quick to voice his opinion about the injustices of the world and our community. His wife, Rachel, just retired after working at Southern States for forty-three!!! years! Their son, Jim, is running for Board of Supervisor in Tazewell County and we’d be blessed to have him win. If I lived in his District, he’d certainly receive my vote. 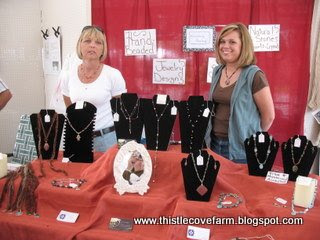 ~ The woman on the right is the jewelry maker and her friend came to help. ~

They were both great fun, all day, and I enjoyed their company even though, just now, I can’t remember their names. The Appalachian Arts Center had two booths at the Highlands Festival and folks could sign up for different days to sell their wares. That’s how these three, Barbara, a talented oil painter from Tannersville, and I, came to be at the Highlands Festival this year and we all had a Great Time! 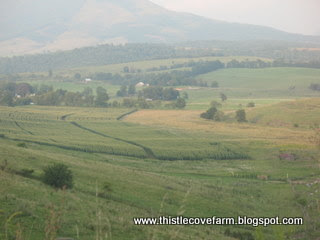 On the way home, via Wardell Road, I stop at what used to be Half Mile Tree and took this photo. Half Mile Tree has gone the way of all flesh and is no longer although the scenery is as beautiful as ever. The rows of green corn stretch in undulating waves while Morris Knob stands sentry in the background left. No matter who has come before nor who comes after, this time now is my time to live in and appreciate the Cove. A blessing I don’t deserve but deeply appreciate; Thank You, God. 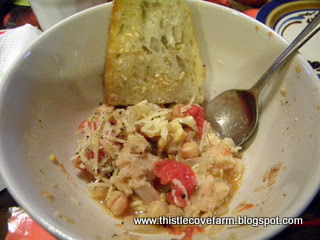 ~ When I got home, leftover soup was my supper. ~
I made this soup two nights ago and it was good then but it was delicious last night. It seems soup has to set up a while before the flavors meld and deepen into a richness redolent more as a whole than separately.

While a sweet onion or two was sizzling away in the deep iron skillet, I peeled and quartered several ripe tomatoes, opened a can of garbanzo beans and a can of artichoke hearts, thawed a container of home made chicken stock. When the onions were ready, I added all the other ingredients, some kosher salt and freshly ground black pepper and simmered the whole until heated through. I served over home made herb croutons and then topped with Parmesan cheese and served with Rosemary Garlic Olive Oil toasted bread. My Oh My, was it Ever Good but it was Even Better last night! As Julia would have said, “Bon Appetit!” but around here we say the blessing -smile-.