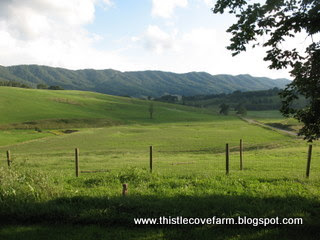 Matthew, computer doc, brought my power pack back…all fixed. Yadda, yadda, yadda is what he said was wrong; all I know it’s working now -smile-. Thanks, Matthew! He’s a great young man, steady, dependable and is quite concerned with how government is being so intrusive in our lives. He told me he goes on demonstrations with great regularity and let our Congress rep know exactly what he was doing wrong and how to correct his direction. GO Matthew!

Deanna responded to the note saying she’d won the mini-quilt wall hanging so that will be mailed…perhaps tomorrow. If not tomorrow, then first of the week. I have a feeling tomorrow is going to break loose like a big girl’s girdle and take off like a shot. We’re still working on the house renovation and I think the guys will be back tomorrow. I sure hope so as they haven’t been here in a couple of weeks and I’m a bit READY to have the house livable. Also, hoping our neighbor comes to help me with horse’s feet; the horses need their feet cleaned and one of the mares is a trifle lame. I picked her feet tonight and noticed she needs trimming so need to get the farrier here as well. It wasn’t a good time for any of us…horses, dogs or me as we got into a yellow jacket nest and were all bitten rather soundly for our troubles. I put vinegar on my stings and then stuff specifically for stings; the pain has lessened a bit but I think I may have developed a bit of an allergy. I got light headed, broke out in a cold sweat, dizzy…’course, that could just be the blonde talking. Sadiekins was stung as well which upset her apple cart; I think Abbie and Sam escaped the torment. 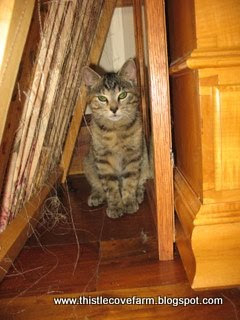 ~ Maddie, posing like she’s the Queen of the Household. ~

Remember the kittens rescued from drowning a few months ago? Well, Maddie, the gray tabby, and Maggie, the darker kitten, have been brought into the house to be house cats. This makes Miss Emma Really Happy as she headed outside every chance she got so she could play with her friends. This also meant Miss Emma was taking Forever to recover from her cold, even with meds given twice daily. This morning I brought Maddie and Maggie into the house and they have shown every intention of never wanting to go outside again. Miss Emma ran outside this morning, looking for her playmates, having forgotten they were inside. In a few minutes, she was back at the door, asking to be let inside and here she has stayed all day. It’s nice to have kittens again; both Dave and I have really missed our cats. Miss Jenny went to live with someone else and she’s much, much happier being the only cat in their household. She had really become a problem, attacking both other animals and humans and causing havoc in the household. She’s been gone a couple of weeks and, within the first 24 hours, adjusted quite nicely to her new home. 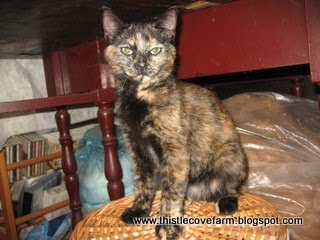 ~ Maggie, hiding under the table and not happy to be surprised. ~

But, with Miss Jenny gone, that left us with no house cats. Earlier this year, TC, 91, Bandit and Miss Kitty all passed away and the house was really lonely without cats or kittens. Maddie, Maggie and Miss Emma have filled the silence very nicely and kitten joy reigns once again. 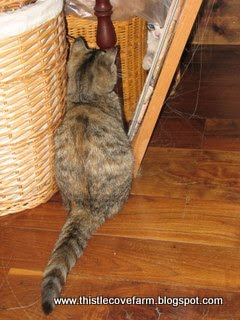 ~ Maddie and Miss Emma, playing around my rag rug loom. ~
This past weekend Dave had a business trip to Raleigh, NC and through a series of fortunate events, I met a blog friend. Cherie and her husband Aris, have two AAAdorable boys, Matthew and AJ and we spent an enjoyable time at the Crabtree Valley Mall food court. This was only the second time I’ve ever been in the Crabtree Valley Mall and found it totally overwhelming. Cherie laughed when I told her there were more people in that mall on Saturday than lived in our little county seat of Tazewell, VA. It seemed to me, most of those people were under dressed as well; I’ve not seen that much flesh since the last time I went to the beach! 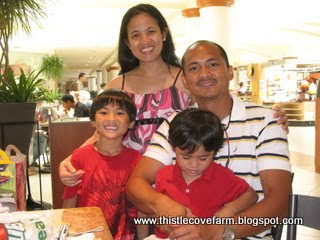 ~ Cherie, Aris, Matthew and AJ – what a Beautiful Family! ~

Cherie is a nurse and her husband an engineer; the two boys are geniuses! Bright as copper pennies, well spoken and, considering this was the first time we ever met, not all that shy. I’m looking forward to when they can visit Thistle Cove Farm and am hoping for a visit this autumn. Cherie, Aris and Matthew came to this country from the Philippines and are making their home now in NC. What tremendous courage this young couple has…to uproot, leave family, friends and homeland and move halfway ’round the world. I am in awe of their courage. The USA is fortunate they decided to move here and my life is greatly enriched to meet them and call them friends. 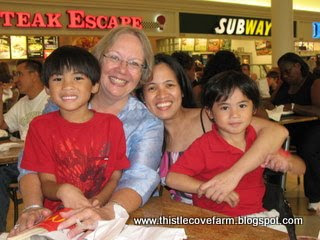 ~ Matthew is on my lap and Cherie is holding her youngest son, AJ. ~

We stayed at the Embassy Suites and the same weekend the Black Hat Divas were also having their “first annual convention”. Although, I’ve never understood “first annual”…how can anything be a first and an annual? It’s either one OR the other, right? Anyway, this group is an offshoot of the Red Hat Society, a group purely to gather and “have fun”. The Red Hatters, as they call themselves, were founded in 1998 so have been around a while and is a group for women over the age of 50 but allow “Pink Hatters” to join as well. I believe Pink Hatters are Red Hatters wannabees, so to speak. Apparently, Black Hat Divas, as they told my friend, “are Red Hatters but with more elegance and bling”. They are purely and simply a social club, women who gather together to party. That’s it. Party. 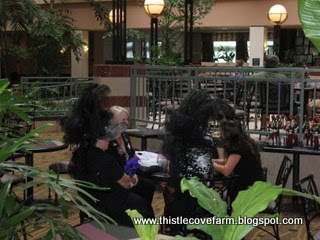 ~ Black Hat Divas…and these are some of the more conservatively dressed! ~

Ummm. Okay. I didn’t get that chip when God was handing them out ’cause I just don’t get it. One woman got on the elevator with a HUGE pin, fake rhinestone costume jewelery, that said, “It’s All About Me”. Sheesh. I bet she passed those genes on, ya think? Don’t get me wrong; I’m not against having fun. I’m not even against women playing dress up; whatever floats their pontoon. I’m not against them spending their money on fluff but what I don’t understand is spending many hundreds of dollars on fluff…fake rhinestone costume jewelery, ostrich feathers, a weekend at the Embassy Suites celebrating “It’s All About Me”. I simply do not get it; I’m glad they had a good time though even though the rest of us were going, “WHAT THA????” Did I mention there’s an entire industry built up around these groups? You would not believe the shopping area where one could buy ostrich feather hats that were three feet high or fake rhinestone costume jewelery stating “It’s All About Me” or “Queen Bee” or whatever. Women showed up at breakfast in their nightclothes, for crying out loud! It was like being at the mall except the flesh was peeking out from night gowns slit up to there and plunging down to there. I’m telling you, a lot of ostriches gave up all their feathers for this crowd.

Okay, now the disclaimer. I admit I am Very Conservative, both in dress and politics. I believe in little to no government, people tending to their own business, living their own lives in peace and respectability and I dress in natural fibers. Actually, I could probably do a walk-on in a Miss Marple movie and look like I belonged. -smile- I am not saying anything against these women as individuals; I’m merely saying I don’t get the “crowd mentality” of “bling”…unless, of course, it’s Real Bling and then I’m all over it! I do enjoy going with my girlfriend to her Saint Martin condo every spring and hitting the jewelery stores in Philipsburg. Real Bling I can handle with aplomb -smile-.

By now, you’re probably thinking, “gosh, it was a lot less to read when her computer was on the fritz”. -smile- Today I’m giving away another little inspirational mini-quilted wall hanging. The proverb states, “The trouble with most of us is that we would rather be ruined by praise than saved by criticism”. Whew! There’s a sermon if ever I’ve heard one and if you feel led, as the old preacher said, to “save me by criticism”, please let me know. If you “get the hatters”, please explain it, ’cause I sure don’t. Get it, that is; I’m still shaking my head. 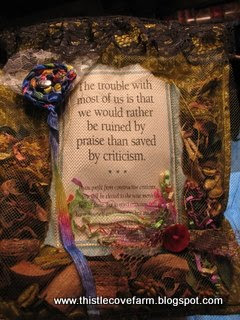