It’s been a quiet week yet full of mid-summer’s work. We live by the season’s and not the calendar, most farmer’s do, and go from early to late in an attempt to prepare for the sleep of winter. I don’t have a favorite season, other than whatever one I’m in, but enjoy all the seasons for different reasons. It seems we’re sometimes in one season yet have a foot in the next, all at the same time. Summer is enjoyable for the warmth and growing season even though we’ve not had much this year. It’s been a cool, wet spring but we’ve not had that much rain this summer. We had a good first hay harvest but without rain won’t get a second or third cutting of hay. It’s my second and third cuttings that are put into square bales then into the barn where they will cure and hold their nutritional value for several years. The round hay begins to lose nutritional value within the first year.

Even thought this is a busy time of year, I’ve been taking it a bit more slowly this past week. The puppies have required so much of my time and my sleep has been interrupted nightly…sometimes as many as three or four times a night. This too shall pass and is passing; last night we only got up once and have moved upstairs to the ‘real’ bedroom with the Wonderful mattress that provides so much support and is So Lovely to sleep upon. All that to say, farm life is rarely dull and boring and excitement is daily in one fashion or another. Or, perhaps I’ve reached that stage in life where I’m satisfied with the small…if indeed they are small…blessings. The cuddle of a puppy or kitten, the snuggle of an older dog, a few words of blessing from Dave, seeing neighbors enjoy a toasted coconut pie, rain on the tin roof, freshly laundered dried in the sunlight sheets on the bed, a pot of beans on the stove, health, love to share…so many blessings…

As I was heading home, this little fawn dashed in front of the truck and I slammed on brakes. The gasoline and diesel cans, in the truck bed, skittered to the front of the truck cab and one fell over spilling noxious fumes in the bed of the camper. I turned on the emergency flashers, grabbed my camera and took a couple of photos then climbed into the truck bed to right the petrol cans.

It’s a young fawn, still has spots and I don’t want to imagine why it was alone, on the road, panicked. A young animal will, generally, stay where their mother places them until the mother returns to move the baby. One other vehicle came up behind me, I stopped it and told the driver about the fawn and urged him to proceed slowly. He asked if I needed help and then slowly proceeded down the road; the fawn was racing in front of the car, all the way. In a short distance, the fawn turned into a hayfield where the gate had been left open and skeedaddled into the field. 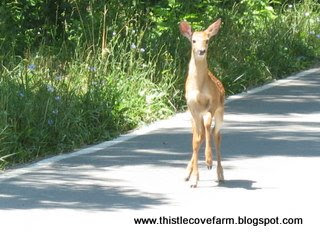 The studio has been getting a new coat of paint and it’s looking really nice. This is the little 12×12 building that, in days gone by, was used to cure hams, bacon and middling. The latter is what the side of the hog is called that’s not quite bacon; I think it’s an Appalachian term but am not sure. The little building was falling into disrepair when we decided to rescue it a couple of years ago. It’s crammed full of sewing machines, quilting table, craft table, shelves, etc. and has a ceiling fan, air condition and heater. Generally, I don’t use the air conditioner as the animals like to be able to wander in and out which suits me just fine. I like windows open so the breeze can bring me the voices of the horses, sheep, cattle, birds and enjoy the dogs and cats running in for a quick snuggle before returning to play.

In the first photo, Abigail supervises Red and Daniel as they paint the taller, back portion of the studio. I hate it when Red isn’t available to steady the ladder; it makes me nervous for Daniel to climb the ladder on uneven ground. Daniel assures me he makes the ladder secure but it still makes me nervous. I’ve read one of the fears we’re born with is the fear of falling and as we age that fear returns to plague our minds. It’s certainly true with me.

Sam Spade and Sadie Hawkins were chasing each other around the studio, a la Little Black Sambo. Remember that children’s story from so long ago? It’s not politically correct but I’m one who doesn’t feel the need to re-write history. I’m afraid if history is re-written we’ll end up living the bad bits all over again. Anyway, Sam Spade stopped to pose and watch as I took his photo; he’s a live wire as is Sadie Hawkins and they both love being outside as much as they love sleeping as much as they love eating as much as they love cuddling. What JOY puppies and kittens have and don’t mind showing it; we Christians should live that lesson as well if not better, don’t you agree? 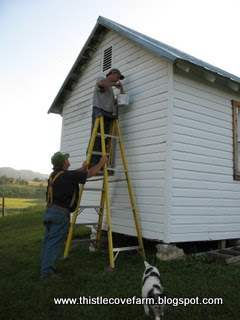 Every side of the studio has play pretties and both sides and the back have window boxes for flowers. The front of the studio has small flower gardens and a few hanging pots brighten up the space even more. Celtic crosses adorn both front and back and windows are on three sides as well. It’s a great place to work, to enjoy the day, to make things that will be gifts for other people. Sometimes I listen to audio books or listen to music but, most of the time, it’s quiet other than the God sounds.

I well imagine the next folks to own Thistle Cove Farm will use this space to write ‘the great American novel’ and I wish them well. Sometimes I take my laptop and work here, checking e-mail or doing other computer work. Sometimes I just sit in the little studio and think my thoughts or pray my prayers. I sit and reflect on those whom I’ve met via the i-net and call their names to God in prayer or remember family and friends or neighbors. This little space brings me much joy, comfort and happiness; it suits me well. I hope the next folks love it as much as I. 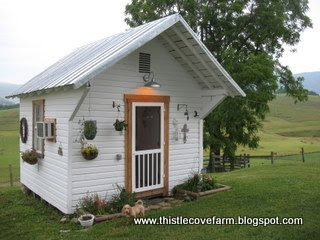 Share
Pin
Email
« Morning Has Broken
Not Finished Yet… »