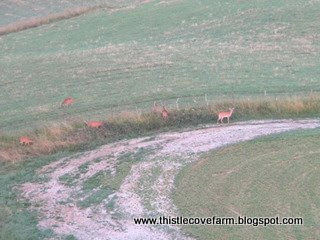 Well, of course I’m supposed to be doing something else…that’s why I’m updating my blog!

Early this morning, sunrise, I watched as six deer fed in Rees’ alfalfa field down the road from our house. At least one of the deer is a buck, with a pretty full set of antlers and he’s the one on the far right, staring toward me. They are about 1,000 yards away so the detail is slim but you can see three on the far left, in rather a triangle with two more center and the buck on the right. They fed until the sun came above the horizon and then moved back to the cover of the mountains. 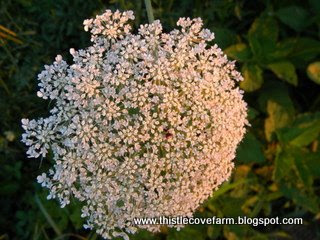 While I was out photographing the deer, I noticed the sunlight on the Queen Anne’s lace. I love to dry this flower and then use it for note cards. Yes, I still do the old fashioned thing and send lots of snail mail. Who doesn’t enjoy receiving a handwritten note…or, sad to say, even a card with just a signature…in this day of i-mail. 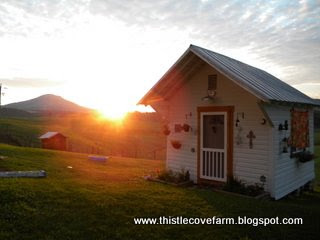 When I turned around, the rising sun was pouring across the valley and the little studio looked quite happy. 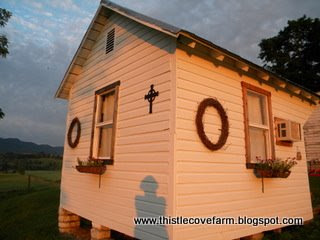 The back of the studio with the hand crafted Celtic cross. Bud, the farrier blacksmith, uses his forge to pound out iron offerings and I especially like Celtic crosses; must be the Scots Irish in me. 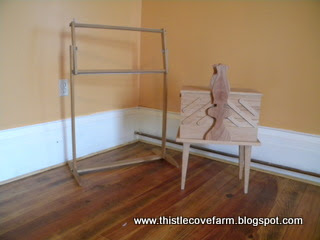 The little quilt frame on the left is just the right size for pillow cases, hand towels, table cloths and the like. The little chest on the right is a hand crafted sewing chest and was made by an uncle of someone I know in West Virginia. 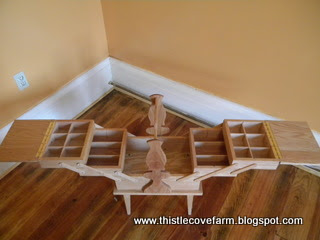 This is the little chest opened wide; can’t you just see all the spools of thread, bobbins, knitting needles, etc. that are going to find a home here? This sewing chest, with the Aladdin type sides and carrier, is in the parlor and while the parlor isn’t finished, it’s looking much, much closer to being ready for use. I spent the morning cleaning everything of the sawdust from floor refinishing, then hanging curtains…drapes to come later when the rods are installed…putting down the Persian rug and moving in some furniture and other treasures. 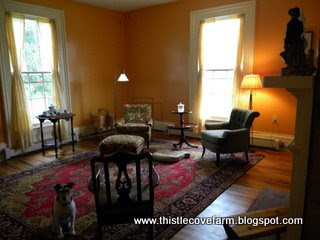 The two chairs in the background will stay in place while the smaller rocking chair may, or may not, be moved around. The chair cushion on the floor, between the two chairs is for a dog. As time passes, more cushions will be moved in so, perhaps, the dogs won’t get on the furniture. But, if they do, the furniture will be covered with sheets. Dave and I are both people who love using our things and who love our animals. We try and keep the furniture covered so when company comes the covers may be whipped off and things look a bit nicer. I just really don’t get riled about muddy paws or accidents. Heck, I’ve reached the age when I have accidents so how could I possibly complain about the animals? 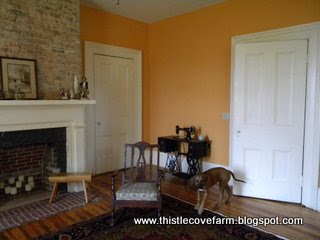 The small fireplace bench was made by Richard, the same man who made our cherry king sized bed; it looks nice by the fireplace and the fireplace candles will, sometimes, be lit for further enjoyment. The Singer treadle sewing machine, given to me by girlfriend, Marti, is dated 1887 and was owned by Marti’s Grandmother. Although it lacks the coffin top, thanks to Mr. Huff, the machine works well and it’s my intention to make myself a quilt on this machine…perhaps this winter…time will tell. 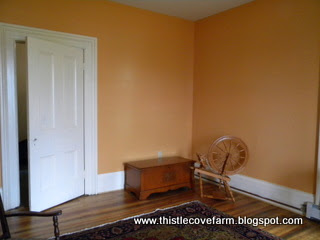 The cedar blanket chest has a spinning wheel carved on the side and I placed one of my spinning wheels against the chest. When the flood damage happened in December, things were grabbed and tossed in order to get them away from the water and my wheel needs a new drive band but that’s a small thing. Eventually, a bookcase will be placed against the wall where the chest is now located; the wheel will, probably, remain where it is and I think the chest will be put into double use as a coffee table. A loveseat is being recovered in red cotton with yellow piping and the blanket chest will be placed in front of the loveseat. I think the rocking chair will, eventually, be used at the spinning wheel and the sewing machine. 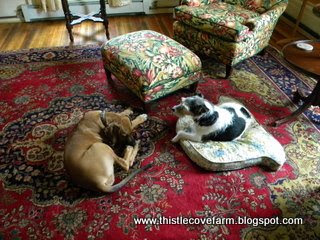 When I had this chair and ottoman recovered, Dave thought the fabric “rather loud”. Perhaps so but it pleases me and is a spark of immense color in this solid color, except for the rug, room. Most of our furniture is antique…OH! excuse me…vintage -smile- and we’ve had it donkeys’ years. Some belonged to Dave’s mother…such as the two-tiered table, the small table in front of the window and the small rocker while other stuff was given to us, bought at auction or thrift stores. I think the only new things we own are appliances; all the furniture is, at the very least, second hand. Some of it has been around the block several times. Both of us love things with a history and a heritage and it tickled us when I found out those types things are now called “vintage” and not “antique”. 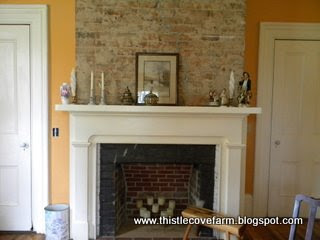 The left door is a closet, quite rare in houses as old as this one. The door on the right leads to the downstairs bedroom where Dave’s mother used to sleep. The ceilings are ten feet tall and the windows are nine feet by three feet. There is not One Single Wall in this house that doesn’t have a door, window or fireplace and in some rooms…as evidenced above…there are two doors and a fireplace.

I’ll take better photos later of some of our favorite things, for example, the antique hand hammered pieces on the mantle. Dave bought those at an antique shop in Marrakesh, Morocco; it was a sight to behold…Dave in bargaining action. Dave has enormous experience at bargaining and haggling and the poor shop owners will never be the same! Other loved items include the pink depression glass bowl, the thistle tea set and candle sticks, vases Dave’s father brought home from Nippon in the 1950’s.

Like other people, we have many little treasures we’ve been given or bought and all bring us so much pleasure…both in the receiving and in the remembering. While the room isn’t completed, it’s looking much better and is a nice place to enjoy a cuppa or thimble of port. Next, we have to re-arrange other downstairs rooms so we can begin work on the dining room. That requires SO much work as Dave’s mother collected things made of glass and there are several hutches Absolutely Filled with glass pretties. It’s going to be a mammoth undertaking to get everything ready for the next phase and I pale at the prospect. Perhaps this is the time to start an ebay account for antique glass…hmmm?