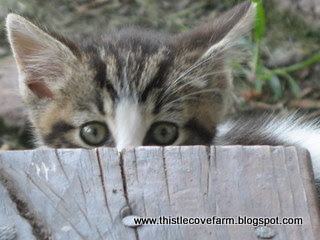 Miss Emma is thriving on her kitten replacement milk formula and puts on a gram or ounce daily. She’s a playful little thing and manages to hold her own with the dogs although I don’t let them play unsupervised. Even little Sam Spade is too strong for Miss Emma in her weakened state. She’s been de-wormed twice and that’s helped; she’ll be given her first shots next week and that will help as well. I’m wondering just how young she was when I found her sitting in the middle of the road, waiting to die. If she was five weeks old, that wouldn’t surprise me! Two barn kittens have begun coming to the house and they all play with great abandon; it does my heart good to sit on the back porch and watch their antics.

Dave and I took the dogs for a walk in the upper pasture. It was great fun to watch Sadie and Sam Spade as we opened the gate and walked through. They stopped, looked around as though to say, “You mean there’s MORE!? All this is ours TOO!?” We’d just finished haying and the round bales were waiting to be moved; horses and sheep aren’t allowed back on the field until the hay is moved so it was all ours for the walk. No need to worry about sheep or horses running us down because they thought we had treats in our pockets. We also wanted to count the bales so we could keep a record of how much hay that pasture produced this year and cutting.

We took photos of each other and it was like herding cats to get all three dogs to stay still long enough to take the shot. They kept looking at me, saying, “You know, it’s MUCH cooler in the shade of the hay bale!” Yeah, yeah. Be quiet, sit down and say, “Dog Biscuit!” 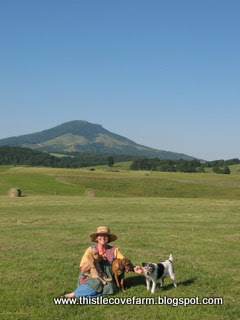 I love this photo of Abbie; it looks like she’s laughing and having the time of her life and that’s why I had to include another photo of me…it’s the only way to get laughing Abbie in this post. 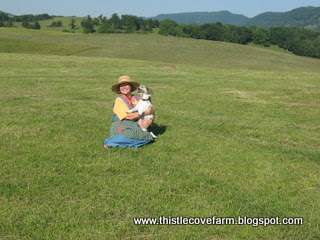 This photo of Dave is a keeper even though Abbie isn’t in the frame. As usual, Abbie is doing Abbie things and can’t be bothered to hang with us. She must always be running thither and hither, checking out the sights and smells instead of being with the rest of the family. Hmmm, I think there’s a lesson for Christians here, ya think? -smile- 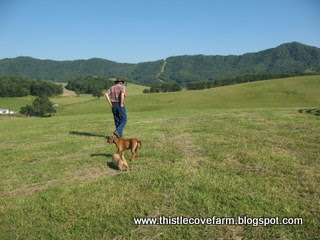 Sadie Hawkins and Sam Spade living a wonderful life. It’s a sad commentary on the rest of the world that we can’t all get along as well. 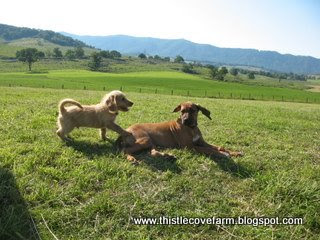 We’ve been blessed with a few days of sunshine and everyone is working mightily to gather their hay. First the hay is cut then, the next day, kicked – meaning turned over so the bottom is now on top and will dry – and the third day it’s tethered and baled. Our first cutting is always put up in round bales while the second and, sometimes, third cutting is put into square bales. Square bales are actually rectangular and weigh anywhere from forty-five to seventy-five pounds.

Here, the round baler has just dumped a round bale weighing approximately 1,000 pounds. I’m not sure how many round bales this neighbor will get, but he has several hundred head of black Angus cattle he raises for market, and needs all the hay he can raise. 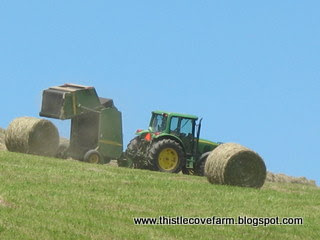 This pasture is below our house and the little white speck in the distance is a school house turned into a house for tenant farmers. We own a bit fewer than thirty acres and people are always assuming all the thousands and thousands of land they see surrounding our home is our land. Not hardly. It’s beginning to be a bit more than I can handle to keep up with thirty acres and if not for hiring help for the hard jobs, I’d be in way over my head. 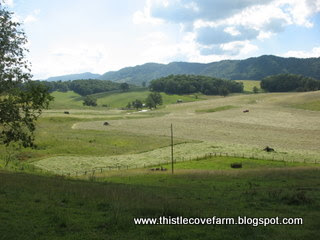 Each square bale must be handled four times – the first time is when it’s picked up from the field and loaded on the wagon to take to the barn. Then it must be off loaded from the wagon into the hay loft where it’s stored to cure until cold weather. I feed square bales in the worst of winter due to the greater nutritional value as it’s almost pure alfalfa. The first round bale cutting is alfalfa mixed with hay. The final time I handle the square bale is when I load it into the Ranger and take it to the animals who are, usually, tremendously happy to see me coming with the square hay. They know the difference between round and square hay and know the square hay is much, much better eating than the round hay. If you don’t believe me, just be here when they see me coming but stand out of the way or you’ll be knocked over!

One final photo of the dogs, resting in the shade of the round bale, my walking stick propped beside them. Anyone who says animals aren’t smart either has never had any animals or they keep them chained to a dog house somewhere in the back yard. Animals are plenty smart and, just like people, some are smarter than others. But, not just like people, animals give and give and give, their hearts giving love even to the most undeserving. Hmmm…another sermon coming on, ya think? -smile- 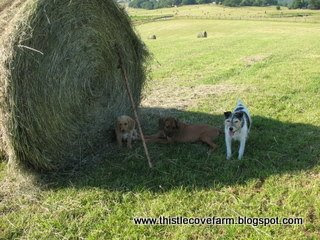 Blessings ~ dry hay and plenty of it! ~ animals to teach us lessons we need to learn, sometimes more than several dozen times! ~ beautiful days ~