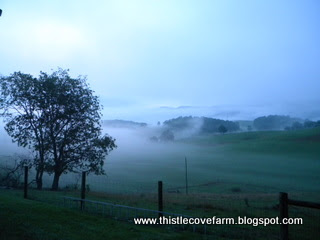 These old Appalachian Mountains are supposed to be some of the oldest on earth; perhaps so but I do know they are among the most beautiful!

Our mornings are foggy and the mist hangs heavy in the air. I enjoy these mornings just as I enjoy all other mornings at Thistle Cove Farm. Each are special and beautiful and a reminder of God’s overwhelming love, grace and mercy. 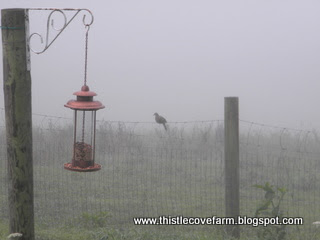 A lone pigeon watches over the feeder. I think it’s going to be a hard winter; I’m filling the bird feeders once a day although they would like it to be more frequent. I enjoy feeding the birds, watching them and listening to their song. It soothes me and brings great joy to my day and life. 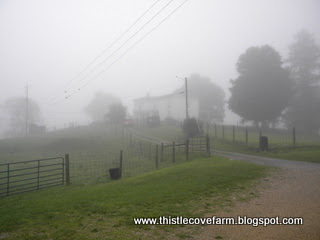 Looking back toward the house you can see the fog hanging heavy. It’s a beautiful time, when the fog is heavy. There’s a peaceful holiness and everything is so quiet you can hear the Earth sigh as she draws her blanket of wet close ’round her. 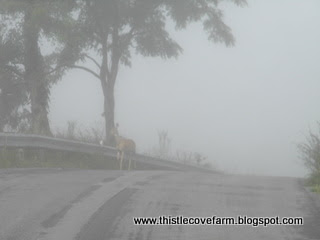 This deer was in the road, undecided which way to go. I stopped the car and waited until his mind was made up and he bounded up the hillside. Usually, deer travel in pairs or groups but I saw no other deer, just this solitary deer as he went about his business. 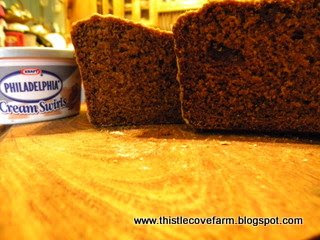 I made the most wonderful brown molasses bread with dried cranberries. It’s really tasty especially with some Philly cream cheese! If anyone is interested, I’ll give the recipe later this week. It’s a quick bread, takes about ten minutes to make and another thirty or so to bake. I’ve eaten it for breakfast, lunch and as a snack and it seems to taste even better as it ages. 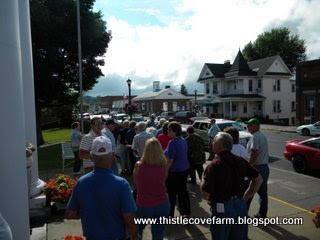 Early evening saw us at the County Courthouse listening to representatives from Americans For Prosperity and The Social Security Institute discuss “Obamacare”.

It was extremely interesting, doubly so because the key note speaker, Lawrence A. Hunter, Ph.D. has worked with several administrations including Regan and Clinton and has a non-partisan viewpoint that is refreshingly clear and was able to succinctly explain why, in his opinion, the proposed “Obamacare” is wrong for the USA.

He’s one of the few speakers I’ve ever heard who was able to get his point across, stick to his topics and all in a matter of a few minutes AND without bashing. He’s made his entire presentation without letting it be known if he was Democrat or Republican and, truthfully, I didn’t really care. What I do care about are the issues and the clear presentation of same. Thank you, Dr. Hunter, for being a clear and succinct speaker.

Well! I’m all for that as a small acreage farmer; iow, an entrepreneur, I am totally against government intervention in my life and business. I believe the job of government is to govern and not to become intrusive in the lives of citizens; and, for one thing, not dictate to me how I should and when I should die.

I have several problems with the proposed Obamacare and the primary problem is why are the President, Congress and Senate exempting themselves from this proposed health care system? If it’s so wonderful for the rest of us, why aren’t they buying into it? I find that disturbing and raises questions that, thus far, no one will answer. That’s even more frightening because when no answers are given, the thoughts one chases might be even worse than the answers.

Another problem I have is the dictate that Everyone age 65 and older MUST have “end of life counseling” with a “certified government practitioner” for “end of life options”. WHAT THE…??? Again, the lack of answers to specific questions such as, “Please tell me exactly what that really means” is highly disturbing and leads me to thoughts of “assisted euthanasia” as opposed to expensive medical care for the elder. HEY! I’m fast becoming one of the “elder” and I don’t like what I’m hearing…or not as the case may be!

All in all, the 1,000 page document reads like 1984 only a few years later. Uncle Sam is now Big Brother as well and in the Commonwealth of VA incest is against the law but I suppose federal supercedes state law, eh? 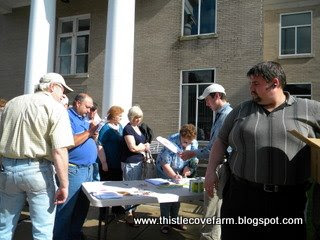 The crowd was, overwhelming, seniors. The only “young folks” where those who came with the speaker or the lone teenage girl who was there with her reporter mother. Here, people sign petitions and they hope to have 10,000 names to take to representatives and Senators in Virginia. 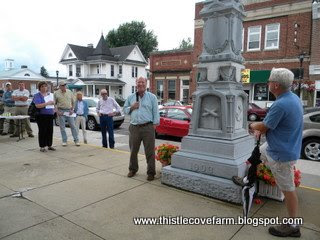 Dr. Hunter addresses the crowd and then gave time for questions and answers.

These two groups are traveling across the country in a red bus and a blue bus. Their aim is to educate people on just what the Obamacare program means in black and white and, let me tell you, from what I heard and, now from what I’ve researched, it’s not pretty and it’s also not safe for the majority of people living in the USA. The vast majority of USA citizenry are now age 60 and above and at a time when a lot of folks think they can retire and enjoy the benefits of a life well lived and worked…think again. It’s just not going to happen if this “health care” plan is passed.

Please feel free to check the sites above and form your own opinion. I’ve also got a “cheat sheet” of facts on the 1,000 page document where one and two-sentence explanations are given about every page and/or section. If you want, I’m happy to forward it to you especially if “you’re of an age…”. 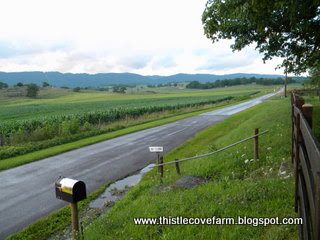 The view above looks toward Rt 91, aka Maiden Springs Road.

Do not be deceived as were the local “experts” who declared Maiden Spring to be plural. Where they got that idea is still a mystery to me. There’s only one Maiden Spring so that makes it singular; at least it did when I went to school.

We live on Cove Road, a hard surface road of a bit over two miles then the dirt road begins.
Our road had macadam applied in the late 1960’s, or so I’ve been told. It’s a beautiful view and, in the past, when I had dogs and not puppies -smile- we would walk the road but only a mile or so. Our neighbor puts out coyote snares and I’d rather not have to rescue the dogs from one of those nasty things. They are a necessary evil and if you don’t think so, then you’ve never seen a lamb in death throes from having its kidney ripped out by a coyote. Coyotes are not native to this region, having been brought here in the late 1950’s as a deterrent to “pest animal control”. I’ve never really been sure what that means but, perhaps, one day someone who knows will tell me. 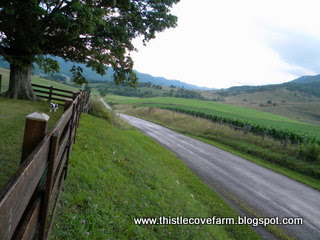 This view is toward the head of the Cove where it dead ends in about 5,000 acres that was deeded to the Nature Conservancy. 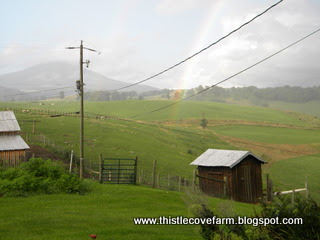 The day ended with this beautiful rainbow, then double rainbow, where both began and ended in our pastures!

I’ve never seen a double rainbow begin and end in our pastures, always in our valley. It was beautiful and I’m reminded of the promise God made to Noah in Genesis 9:11 “And I will establish my covenant with you, neither shall all flesh be cut off any more by the waters of a flood; neither shall there any more be a flood to destroy the earth.” God set the rainbow in the clouds as a promise to Noah and to following generations. And think, today I’ve seen a double rainbow! What a wonderful gift, thank you, God. 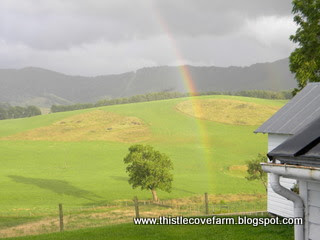 As always, may the Good Lord take a liking to you…but not too soon!

Blessings ~ rain ~ rainbows ~ home made bread ~ a free country ~ a great view, no matter the direction ~ the scent of air after the rain ~