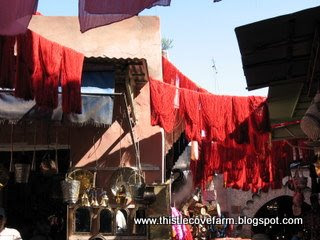 In Marrakesh the dyers of yarn hang heavy skeins overhead in order to dry in the hot, bright sunlight. As we walked in the souk amazing sights were on all sides and above!

It’s been mentioned before, Dave and I love to travel and one of our favorite places is Morocco. We’ve spent many happy times there and in various places including Marrakesh, Tanjer, Ouarzazate -pronounced wherezitat or “where is it at” said rather quickly – Zagora and Mhamid which was our jumping off point for our camping trip into the Sahara Desert with the Bedouin and the Touaregs sometimes know as the Blue Men although that’s not quite factually correct. At any rate, we had fabulous times, great memories and if you’re interested in hearing some traditional music played by Touareg nomands, click here. We didn’t travel with this particular company, the Blue Men link, but they look interesting and bring back lots of my own memories. 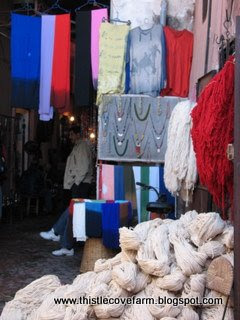 Yarn is not precious, the way some consider it here in the USA or ooo-sa as it’s pronounced around the world. This yarn looked to be a down breed type yarn and took heavy abuse of all sorts. I bought some skeins in a deep brown shade. Above, it’s piled up outside the shop, spilling onto the path so visitors and shoppers had to side step around the pile. This shopkeeper also sold scarves and other pieces of material.

The first time we went to Morocco, we spent time in Marrakesh before heading to parts south and east…specifically, Ouarzazate, Zagora and Mhamid and then into the Sahara Desert about nine -9!- miles from the Algerian border. We did not get as far as Timbuktu but are saving that for another visit…or perhaps not as that area tends to be a bit dicey. Wikipedia call the Tuareg nomands a “pastorial” people but other sites call them warriors, They are nomads, perhaps the most nomadic of all tribes left and have a favorite saying, “houses are the coffins of the living“. More truth than beauty there, especially if one has spent time in the company of nomads, living amongst them even if for a short time.

Dave and I live in an area where the night sky stretches into where the horizon meets the earth but is not truly visible due to the mountains. The Sahara Desert is where the horizon meets the earth and the stars tumble into the sand dunes. In a word: AMAZING. Or incredible, tremendous, awesome…and I’ve never, ever used the word ‘awesome’ lightly…the sight is, literally, breath taking. There, in the company of Bedouin and Blue Men, Muslims all, I felt as close to God as I’ve ever felt. Remember the Sistine Chapel where Michelangelo painted the finger of God touching the finger of Adam? That’s what I thought of, standing in the Sahara Desert…if I stretched up my hand, toward heaven, God Himself would reach down and touch His finger to mine. Corrie ten Boom was right, paraphrased, “there is no place, God is not there”.

There, in the Sahara Desert we had delightful discussion about my God, their Allah and how we individually worship, how we see other religions and other people. We found out we’re not all that different. We want to live our lives, worship as we see fit, raise our families, celebrate weddings and birthdays and bury our dead. We talked about how the fanatics around the world make the world an unsafe place for everyone…this especially interesting as we were SO close to the Algerian border!

Some of their concerns included the encroachment of the Sahara Desert and how their nomadic lifestyle was being threatened by change, desert and oil cartels. How much their world had already changed since they were toddlers, only a couple of decades ago. I was a bit older than the mothers of several of the young men and listened as their voices held a tone of sadness as they recounted changes come and yet to come.

Even though we were in the desert a short time, when we returned to Marrakesh it was culture shock. The women wore clothing that was suggestive, especially the tourist women, and even some of the Moroccan women were smoking and wearing mini-skirts. It was strange how I became, in such a short period of time, so used to modest clothing and behavior. Marrakesh is an old, modern city where Muslims, Christians and Jews live together peaceably. One can hear church bells and the call to prayer within minutes of each other; I found it pleasing. While I am a Christian and truly believe heaven is through salvation in Jesus Christ, I enjoy learning about other religions because I enjoy people and am not threatened by other religions nor cultures.

Remember the abuse I alluded to earlier? The dyer has a large pot over a wood fire and the yarn is poured into boiling water…yes, boiling!…and left to boil the dye into the yarn. All I’d ever heard about hot water, friction and wool came to a screeching halt. This stuff was NOT felting, it was having the dye boiled into the yarn; mind enlarging indeed! 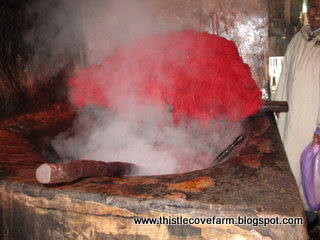 I keep getting closer and closer to the dye pot, my eyes unwilling to see, my mind unwilling to comprehend the Boiling Water! 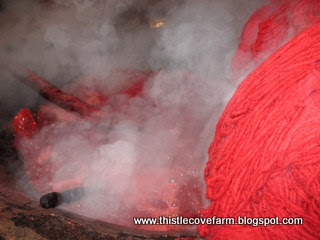 I remember walking out of the little shop…really, no more than a stall about six by eight or, at the most, eight by eight feet, and saying to Dave, “He’s BOILING the yarn!” 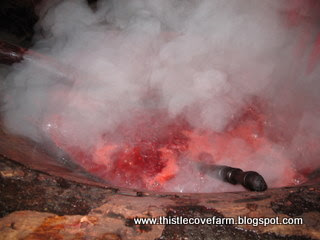 The hand carved wooden spoon is for swishing the yarn around so it can absorb all the dye, then for lifting the yarn out of the pot and sitting it aside so it can begin draining. 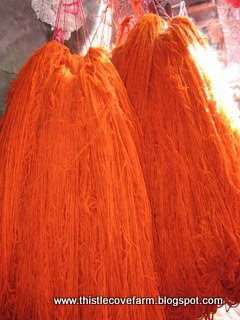 I wanted to buy a skein of this orange yarn but it was several, several thousand yards and luggage space was limited. Next trip, I’m sure… 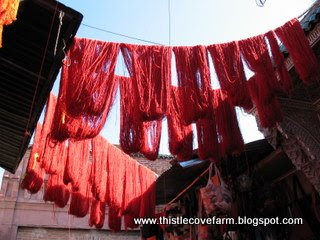 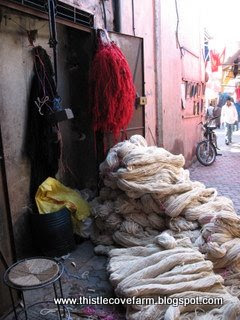 Yet another shop keeper with dozens upon dozens skeins of yarn spilling out of his shop. Again, you can see the yarn is simply laid on the street, not put delicately into a crate where it can be fondled by hoitey toitey knitters -smiling and poking fun at myself here-. 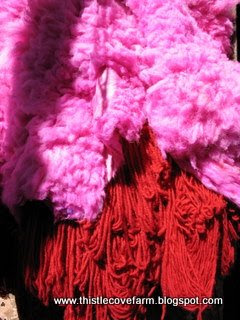 I have no idea what the pink dye material is but the red is, I believe, henna as cochineal is native to the western hemisphere. 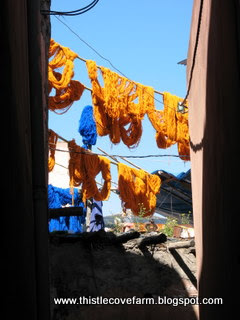 These skeins of yarn combat the sun for beauty while the blue yarn may be purchased by a Blue Men tribal woman. 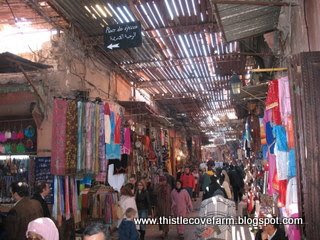 Above a typical aisle in a souk which is, essentially, a small village within a village…a shopping mall, if you will.There are places to purchase clothing, footwear, food, drink, leather goods, silk thread, head gear, bags, rugs, carpets, antiques, kitchen supplies, home decor…the list is endless! I’d never, ever been in such a place and loved, loved, LOVED it! The sights, smells, sounds…the haggling, bargaining, the hot tea and the ceremony wherein it’s poured out for guests, the noise, the tactileness…yeah, yeah, I now that’s not a word-before now! smile- The souk is the heart of the old part of the city and was steps away from our riad or bread and breakfast as it’s otherwise known. Dave was a Master Haggler and haggling is something that’s expected when shopping in a souk. The better haggler one is, the more respect the merchant shows; basically, it’s just a big game one engages in, although I always “hid behind Dave’s trousers” and watched him at work -smile-. The shop owners had more respect for both of us as I was a “proper, traditional wife” and let the husband conduct the business. I strive to show respect when we travel and generally wear a scarf, keep arms and chest covered and, when possible, wear long skirts. When I show my “host” country respect, I find they treat me as a valued guest as opposed to an “ugly American”. 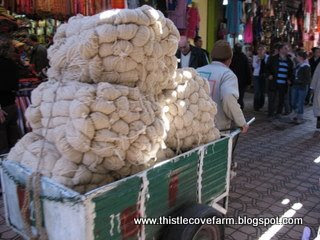 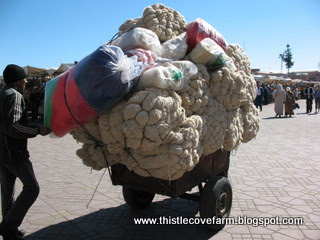 Have I mentioned how much I love Morocco and the Moroccan people? -smile- We’ve visited the southern part of Morocco once but have been to Tanjer -using the old spelling- two times and that’s because we were in Spain on holiday. Tanjer is only a thirty minute ferry ride across the Strait of Gibraltar and is fairly exotic in itself as it seems all of Europe goes to Northern Africa via the inexpensive ferry. There’s a lotta world left to see but another trip to Morocco still ranks pretty high up on my “bucket list“; I find too much of a good thing is Simply Wonderful! -smile-