Sunrise at Thistle Cove Farm, at this time of year, generally means fog. This morning was no exception and the fog was thick, heavy and wet but, usually, burns off by mid to late morning. It makes for an interesting walk in the pastures but, most of the time, I wait until the fog has burned off to walk. You just never know when some buck ejiit is going to decide to hunt from the road. Sure, it’s illegal but we’ve sit and watched them do it, especially in deer season. Sometimes, someone will fire their gun from their vehicle if they see a groundhog and, if they manage to kill the groundhog, will come and tell you they “did you a favor”. No, buck ejiit, the favor you’d do me is to leave here and never come back. 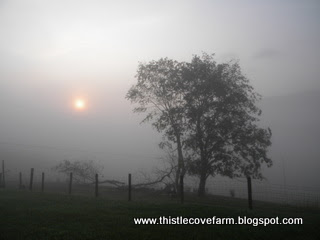 After the fog burns off, the dogs and I go to the upper pasture. It’s good exercise for everyone and Sam Spade and Sadie Lady manage to get in their fair share of fun as well. Abbie is, as usual, running and sniffing and doing dog things. She has little time for play when there’s Work to be done! 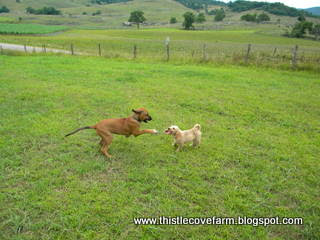 This view is looking back toward the house and toward the head of the Cove. On the map, it’s called Ward’s Cove but locals shorten it to the Cove. 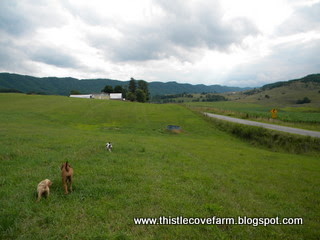 Sam is always good for Big Puppy Eyes. Surely he has Spaniel in him, don’t you think? Those are Spaniel bedroom eyes if I’ve ever seen them! 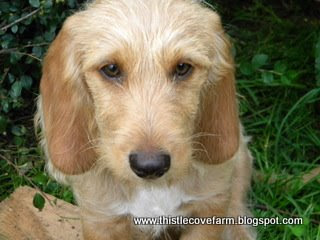 It’s canning season and the canner has been busy with green beans and peaches. From a bushel of stringless green beans, I canned 28 quart jars. 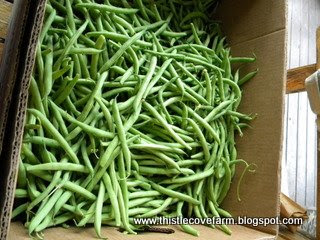 My mother taught me to can the summer I was 13. I found some wild fox grapes, large white grapes, and brought them home. She said you can either eat them now or I’ll teach you to make jelly. Jelly won out and that useful skill she taught me has stood me well all these years since. 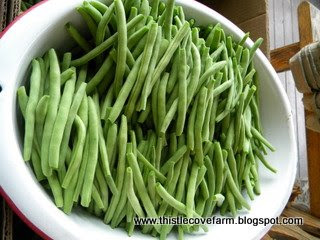 I enjoy canning produce because I enjoy having a full pantry of nutritious, CLEAN food. When you purchase a can of green beans at the grocery store, the USDA allows so many “foreign parts” per million in a vat of green beans. What that really means is, the USDA allows so many roach bits or rat feces or the like in XX million parts of canned goods. Yes, and this are the same people who inspect our kitchens and proclaim them “unsafe” if we have dogs or cats in the kitchen!

I mean…is it ME or does there seem to be a Severe Disconnect here? As in brain cells are firing but gathering no purchase?? 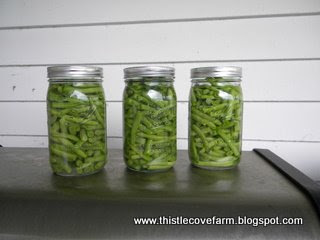 Three of my twenty-eight jars of green beans ready to be placed in the pantry and eaten once the snowballs start falling. I do a lot of my canning on the gas grill as it keeps the house much cooler as well as lower humidity inside.

For Dave and I, nothing says “summer” quite like fried green tomatoes. He thinks I make the best fried green tomatoes he’s ever tasted and, I do agree, they are quite tasty; we’ll have them several times a week, if not twice a day until we tire of them or, what generally happens, we run out of them. 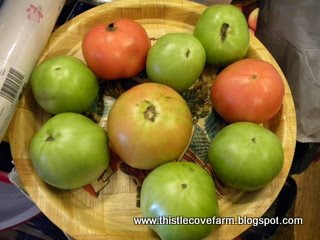 I use equal parts white, wheat, rice, buckwheat flour and toasted wheat germ. If I have other flours, I’ll use that as well. As to seasoning, I let folks do that at the table as it’s easier and they can add exactly what they like. Seasonings on the table include sea salt and cracked peppercorns.

First the sliced tomatoes are slipped into milk to prep them for the flour mixture coating. 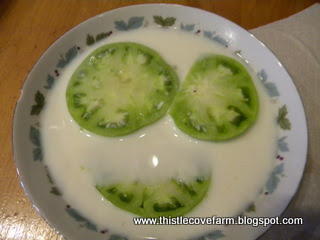 The tomatoes are dipped into the flour mixture and coated well on both sides. 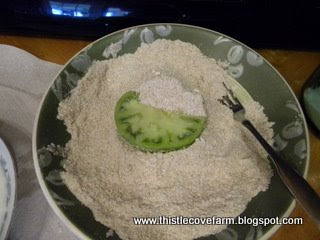 The hot oil is virgin olive oil, heated to a high temperature in an iron skillet. I believe this is the skillet Aunt Bonnie gave me and it’s one she was given as a wedding gift back in the 1930’s. I use iron cook wear as I’m not entirely satisfied that coated cook wear is safe. Besides, the extra little iron in my diet is a good thing. 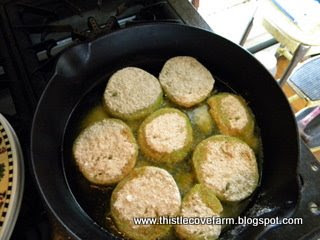 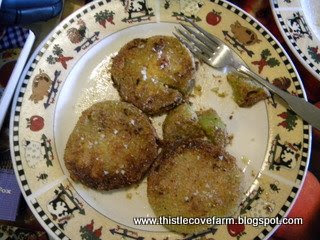 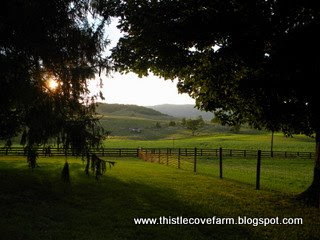 Another beautiful sunset over Thistle Cove Farm; and the Day is Done by Henry Wadsworth Longfellow.

“The day is done, and the darkness
Falls from the wings of Night,
As a feather is wafted downward
From an eagle in his flight.

I see the lights of the village
Gleam through the rain and the mist
And a feeling of sadness comes o’er me
That my soul cannot resist;

A feeling of sadness and longing
That is not akin to pain,
And resembles sorrow only
As the mist resembles the rain.

Come, read to me some poem,
Some simple and heartfelt lay,
That shall soothe this restless feeling,
And banish the thoughts of day.

Not from the grand old masters,
Not from the bards sublime,
Whose distant footsteps echo
Through the corridors of Time.

For, like strains of martial music,
Their mighty thoughts suggest
Life’s endless toil and endeavor;
And to-night I long for rest.

Read from some humbler poet,
Whose songs gushed from his heart,
As showers from the clouds of summer,
Or tears from the eyelids start.

Who, through long days of labor,
And nights devoid of ease,
Still heard in his soul the music,
Of wonderful melodies.

Such songs have power to quiet,
The restless pulse of care,
And come like the benediction
That follows after prayer.

Then read from the treasured volume
The poem of thy choice,
And lend to the rhythm of the poet
The beauty of thy voice.

And the night shall be filled with music,
And the cares, that infest the day,
Shall fold their tents like the Arabs,
And as silently, steal away.”