This week, I’ve been counting my blessings between naps or, to be more accurate, long sleeps. I’ve been sick with a cold or something resembling a cold and it has taken its toll. The animals, particularly the dogs, have been most unsympathetic with my plight. They still expect to be fed, given treats, let in and out of the house, walked and all the other duties our dogs think humans are put upon this earth to perform. When I’ve been unable to perform, according to their satisfaction, they give me these long, doleful looks that say, “Are we not the least bit important in your life? Is it asking too much for you to come play with us?“

Somehow, going to the barn to do chores, just isn’t quite the same as actual playing. Who knew? I was certainly fooled!

One huge blessings is Sam Spade; he’s living with us as companion and, it appears, has found his home. Sadie Hawkins thinks so but the other two older girls, Abbie and Gracie, still need some convincing. I thing perhaps a year or two might convince them but, certainly, no less. They, like so many of us, have become set in their ways and the least bit of interruption in their schedule is not to their liking. Every now and again, I see in Abbie the beginnings of acceptance but Gracie still snarls and bares her teeth should the youngins’ get too rambunctious too close to her.

Here, Sadie waits for Sam to catch up and Abbie is gone to yonder and back. Abbie is always the point and seldom, if ever, waits on the rest of us. Goodness! There might actually be a ground hog or rabbit someone else might sniff out first and then, there goes Abbie’s reputation. She can’t have that! 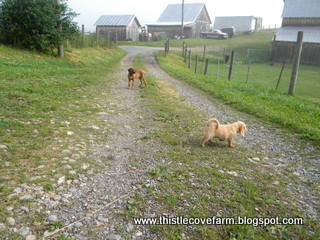 Sadie and Sam will play with virtually anything. Which is, yet another, blessing as it takes some of the responsibility off me. I’m one of those people who believe the best way to socialize a puppy is lots and lots and lots, as in round the clock, human interaction. I like using firm commands, interspersed with yelps of pain and, I’m sorry to admit this but God already knows anyway…a few choice curse words when blood, my blood, is brought forth. Sadie and Sam both have puppy teeth, which means shark sharp teeth, but their teeth have been, somewhat blunted with age and my skin. They are both getting better about biting though and it only takes a firm, “No Bite” for either of them to get the message, “Don’t bite the human” and return to biting each other. Unless I see blood, I seldom interfere and, truth be told, I’ve yet to see blood, at least their blood. I, on the other hand, don’t have much vitamin K and am a free bleeder. Makes it interesting in church…I’m sitting there, listening to the sermon, thinking how it applies to my life and Dave will lean over to me and say, “Do you realize there’s blood dripping down your arm?”

All those expensive toys we bought them and they play with a basil plant wrapper. King Kong toys…a complete and total waste of money as they are simply Not Interested! They figure if they hold out long enough their human will give them a treat free and clear…no working for it. Just like Uncle, eh? 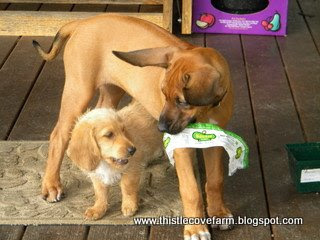 One of those rare, peaceful moments where Sam found the, heretofore, cat basket, and claimed it as his own. Poor baby, he’d worn himself out playing tug with Sadie. 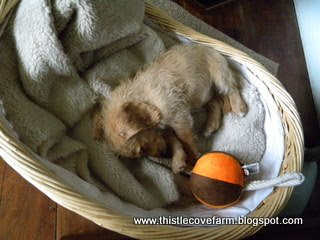 Even though Abbie will snarl, growl and run from Sadie and Sam she does have a soft side. It’s to be found when she’s sleeping and Sam claimed a soft spot on her flank to take a morning nap. 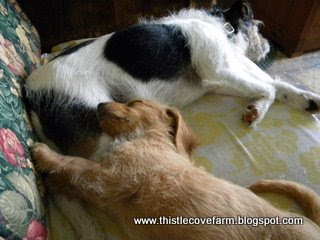 There are times when both puppies will curl up in the dog basket and noodle. That lasts all of a few seconds and then it’s back to puppy play which is loud, boisterous and lively. 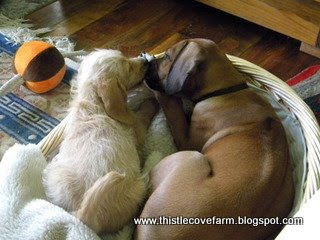 As to the cold…it’s some better due to Sambucol, cough drops, copious amounts of water, as much sleep as I can stand and time. As Daddy likes to say, “Father Time and Mother Earth will take care of everything…one way or the other.”