How could someone POSSIBLY have thrown this beautiful little puppy by the side of the road? We figure there must have been others, who didn’t make it, and this little feller was the only one left. He was running around, absolutely panicked and came straight to me when I called him. Right now, he’s living in our outside kennel rug over the dog house to protect him from the elements,towel in the dog house for warmth and fresh water and puppy chow. He’s liking this better than last night. God alone knows what happened last night. 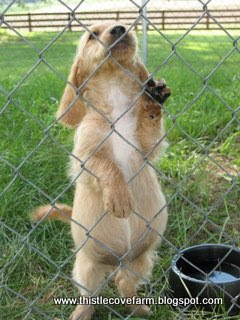 See how his little…er, perhaps not so little…belly looks like a Budda Belly? He’s just had his second meal of the day and is feeling full but he does NOT like the kennel and I don’t blame him. He’s young enough that he’s, maybe, just, barely weaned and misses his litter mates and his mother. When I pick him up and cradle him, his cries turn to little sobs until he, finally, quietens and snuggles against my heartbeat. Little things enjoy being nestled against your heart; it lessons their fears, gives them warmth and quietens them into being calm.

He’s not likeing the bars but until Dr. Anne comes tomorrow, that’s where he’ll stay. I’m going to try and find a good home and have someone in mind so pray, pray, pray Mike will want this little feller.Lat night was the Thompson Valley community supper and a fine time was had by all. The weather has been rainy, rainy, rainy all week and people were starved to be outside. Good food and good music, along with a silent auction, made the evening just about perfect. 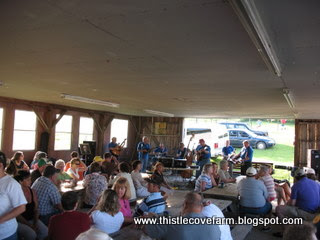 This week we had rain and tremendous storms. Here, the clouds are just beginning to roll over the mountains, into the valley and soon covered everything in a wet fog. 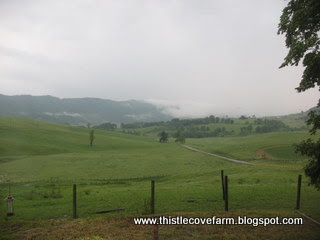 Going across the mountain we found this little one, stuck in the middle of the road, going from here to there or there to here. Whichever. Dave stopped so I could pick him up and move him into the pasture, behind a fence. For reasons unknown to me, some folks like to run over things and would have considered this ‘fair game’. Although, imo, there’s nothing fair nor game about it. Did you ever have a box turtle? As a child, I was forever bringing home animals or animals were forever following me home…box turtles, cats, kittens, puppies, dogs, birds. When I was about 9, I nursed a barn owl back to health; when I was about 13, I raised six five-week old kittens on a bottle until they were strong enough to be given away…their mother had been killed in an accident. 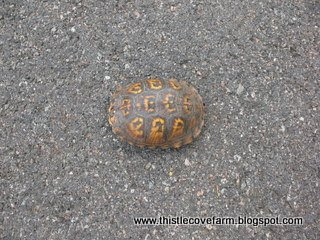 Sundays are supposed to be reflective, quiet, full of grace and mercy, tender, gentle and s-l-o-w.
Right?

Well, someone needs to tell who ever is in charge that my Sunday was anything but! The dogs and I woke early, as usual, and took dogs outside to potty, check out the smells of the skunk who comes to steal cat food and then back inside so I could slip on some shoes to head to the barn. I checked on barn cats, fed and watered them; sheep counted; horses counted and locks checked.

Back to the house where Sadie was fed breakfast which, btw, sorely puzzles Gracie and Abbie because they don’t get breakfast. Although I am going to start feeding them twice a day, just half their rations each time. That’s one of “those things”…Daddy always fed once a day, at night, and so have we but, since having Sadie, I’m thinking twice a day might be better. Sadie gets fed three times a day because that’s what her breeder recommended. What about you? How do you feed your dog or dogs?

I headed to the shower and revel in the face it’s the only place in the house I can be totally alone. At least, totally alone as in there’s no one else in the shower with me. There are dogs, sometimes cats, in the bathroom when I get out of the shower but IN the shower…AHHHH, it’s just me.

Flash forward, I’m dressed, hair dried and headed out the door when a neighbor comes up the driveway. He suggests we moved horses from one lot, across the barn lot, to another lot. Sounds easy peasy. HA! Why is it that anything that sounds easy peasy ends up being tough as nails?

As soon as the gate was opened the horses made a break for it, where ever ‘it’ is; I’m not sure but from the way they took off, they must have had a pretty good idea. I chased those dratted horses, lead rope whistling in the wind, up one side and down the other of the barn lot until they were cornered into the correct lot. The reason they are away from the other horses is…they are F-A-T and need to lose weight. Lightly is my first foal and she’s now about 6 or 7 and gains weight on bread and water. Seriously. She has the metabolism of…well, of nothing. She eats and gains weight, that’s what she does and she does it really well. Daniel is coming by tomorrow to trim her feet and then Lightly and I have a standing appointment, during the cool of the day, to work in the round pen. One way or another that girl as GOT to drop some weight. She’s probably saying the same thing about me, ya think?

Hmmm…now that I’m rubbing a couple of brain cells together I’m thinking this is God’s way of answering my prayer to lose weight. Blast! What I really wanted was for Him just to melt it off by Himself. I didn’t want to actually sweat or anything.

So, now I look like the shower was merely a suggestion; formerly washed and blown dry hair is plastered to my face and head, I’m sweating like a pig and gasping for air like someone stuck my head under water. Oh yeah, I’m gonna look and feel my best when I get to church this morning.

Dave says, “do you want to still go?” I just look at him while I’m gasping for air, “Yes, I do” so we climb in the car with extra minutes still to spare. See, we’re usually walking in just as they start service or a few seconds before. We seem to have a knack for being not quite late or barely late. It drives Dave crazy but I’m just glad to be there…finally.

We’re headed to church when something catches both our eyes and he slams on the breaks. It’s The Puppy. The one above…Budda Belly who looks like he might have Golden Retriever in him. Someone has thrown that precious little puppy away.

Once, I was talking to an older gentleman who was giving one of my foundlings a home. This older man’s dog has passed away and the man had open heart surgery and was supposed to walk every day. He just couldn’t bring himself to go walking without his companion so God put the three of us together. Anyway, this gent and I were talking about people who threw away animals. He looked at the elderly Chihuahua on my lap and said, “Well, sir. I figure if I saw someone throwing this little girl, or any dog, out on the road…they might get a meal but I’d at least get a sandwich!”

YES! A man after my own heart! Someone who doesn’t want to see anything, animal or human, thrown away, abused or hurt. There’s entirely too much of that in this frosty old world and I know, truly I do, that I can’t save them all. But, God willing, I can save those He puts before me. Thank God, Dave feels the same way. 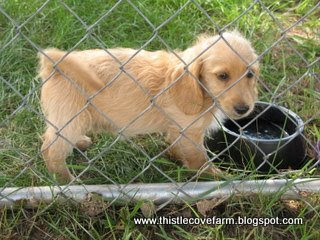 So, would you like a puppy? After tomorrow he’ll have his first shots, be de-wormed with his first physical. He’s a lovely little thing, full of personality and love galore and it’s all waiting just for YOU. I’ll even let you name him.

Blessings ~ puppies ~ Dave who will stop for puppies ~ church members who think we’re crazy but love us anyway or, at least, pretend they love us anyway ~ community suppers ~ turtles ~ rain ~ fog ~