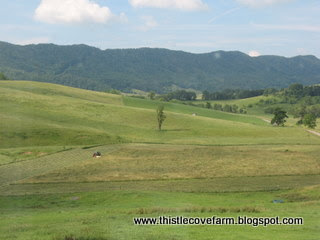 We have a window of opportunity for hay making; it’s not supposed to rain until Friday so say your prayers and live right! Our alfalfa field is not quite ten acres but it’s plenty for my eight horses and thirty-three sheep. Usually we even have enough to sell and John, our neighbor and Dr. Anne’s brother, is the farmer driving the tractor and cutting our hay. He’s a great young man and his wife, Ashley, works for Dr. Anne as well as tends their home and young son, John, Jr. 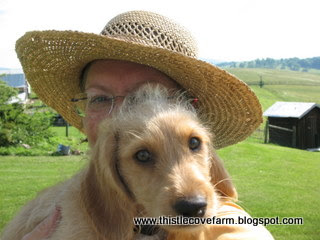 No matter how busy I am, there’s always time to take pictures of the critters! Sam Spade, or Stubby Sam Spade as some are calling him, is the smallest and youngest…we think…dog and weighs just about ten pounds, perhaps less. He keeps up with the rest of us but gets tired rather quickly and will run to me and look up at me with those beautiful light brown eyes and say, “Please carry me!” Of course I do, how could anyone resist those soft eyes? He’s a love bug and we’ve had a lot of people…after the fact, of course -smile-…say, “Oh, I would have given him a home.” Well, too late people; Sam Spade has a home and it’s in my heart; he’s not going anywhere except with me and he looks plenty happy about it! 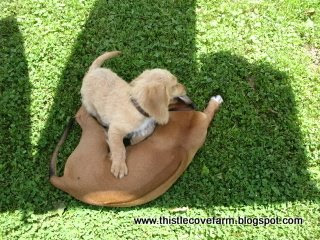 A great deal of Sam’s time is spent playing with Sadiekins and I don’t intervene unless I hear extreme yelps and growls. Usually, Sam Spade is the one egging Sadie on and Sam Spade is the one generally getting into trouble. Perhaps he knows he’s the littlest and can get away with more. Sadie is, for the most part, gentle with him but even she has her limitations. Generally, when she’s wanting a nap that’s when Sam Spade says, “PLAY TIME!” Ole Sadie is patient and long suffering, for the most part. 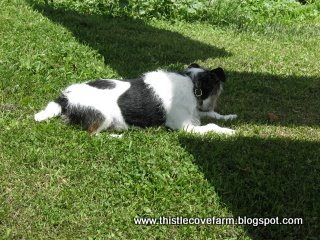 Three of the four dogs are always with me; Gracie has old bones and she’s more comfortable resting in the shade. I’ll try and get a photo of her but, in the meantime, here’s Abbie, close by as I’m hanging clothes on the line. Yes, as a matter of fact, I DO carry a camera in my pocket. I just never know when something will grab my atention and I’ll need to record the moment. 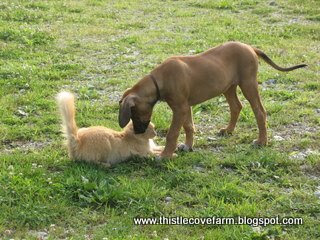 We’ve been getting up around 5:00 a.m. but not heading down to the barn until around 7. When we first get up, the dogs all go outside, do their bidness and then it’s breakfast for the youngins’. After breakfast, I’ll either sit on the back porch and let the dogs play while I read or we’ll go to the sunroom and they will play while I listen to Alexander Begg and others on the radio.

When we head to the barn, Ole Yeller and her kittens come to meet us. As you can see, no one is afraid of the dogs although I watch everyone carefully. The puppies aren’t as aware of their strength and I don’t want the kittens injured. Sadie and Ole Yeller say ‘Good Morning’ and it confuses Sadie when Ole Yeller won’t run or hiss. Sadie is becoming used to the idea of a Flying Unicorn at Thistle Cove Farm so, thus far, things are working out quite well between all the animals. 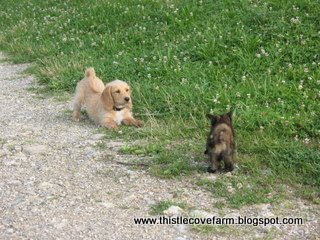 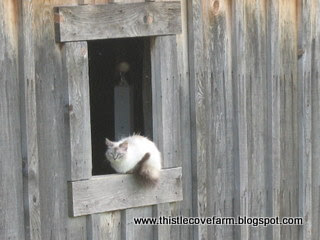 Miss Fluff watches over all and is fairely disgusted with the idea of breakfast being late…again. 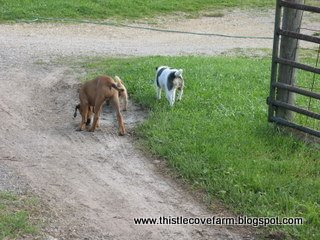 This is my usual view as we head to the barn…nothing but monkey butts! 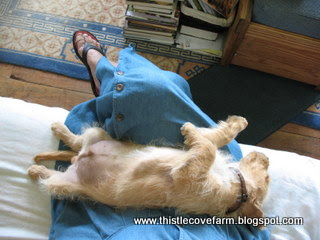 Sam Spade knows a good lap when he sees it! He’s tuckered out and needing some zzzzzz’s so he can get into the game again. 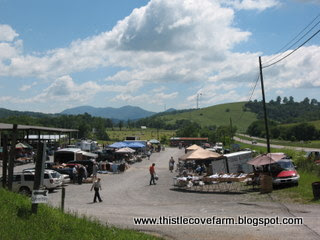 On Monday morning there’s a flea market at the livestock market and Abbie and I usually go. We’ll head to Hardee’s first, share a ham biscuit then head down the road to buy veggies and see what other wonders are available. Today, Dave went with us and we were able to go to Hardees, the flea market and Dr. Anne’s office before heading home. I picked up some kitten de-wormer and am thinking Miss Emma will benefit, greatly, from being de-wormed. I know Sam Spade has just about tripled his weight after de-worming and all in two weeks. I also got some kitten formula and will warm that for her; she’s been eating tuna in water and drinking half ‘n half but the de-worming and kitten formula should work a small miracle in her life.

It’s a beautiful day – bright, sunny and hot and I’ve washed and dried half dozen loads of laundry. There’s still a load or two to be done as well as vetting on the kitten and I want to clean up my old Singer treadle sewing machine table. The sewing machine itself is being fixed by my wonderful sewing machine repair man. A friend gave me the machine and it needs some work but Mr. H. said, “Bring it to me, I can fix it.” I believe he can, too, as he’s fixed two others for me. I wish I were a better seamstress…and indeed, that’s giving me a grand title to make you think I’m a seamstress at all!…but, even so, I enjoy sewing. I don’t sew great things, I sew with great love, to paraphrase Mother Teresa. Great love and great prayers that whomever receives one of my quilts or other offerings will be blessed by God in ways they won’t even realize. Isn’t that the case with all of us? We’re all blessed by God in ways we don’t even realize but, sassy us, sometimes think because we remember to say “thanks” for a blessing or two, we’ve done something big. It’s humbling, isn’t it? How blessed we are, all of us.