The huge hole left in our hearts by Shaddie‘s passing in January, is, slowly, being filled by Sadie. Her registered name is Keniba Thistle Cove Sadie but she’s known simply as Sadie or, sometimes, in a moment of weakness, Sadie Mae. Dave doesn’t like Sadie Mae but I’m not crazy about him calling her Killer, Fang or other such nicknames. I feel Sadie or Sadie Mae fits her. Sadie is a nickname for Sarah, Hebrew for Princess, and is a good, strong Appalachian moniker. She’ll grow into a good, strong dog, probably seventy to eighty pounds and we’ve already bonded. 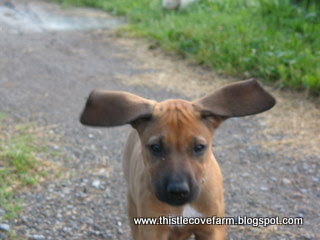 She has started going to the barn, can climb up the porch stairs, comes when called…when she wants -smile-…and does a multitude of other, wonderful things that only people who have had dogs as puppies can appreciate.

We spent most of this afternoon in the studio where I quilted and Sadie napped. I think she’s better at her job than I am at my job. 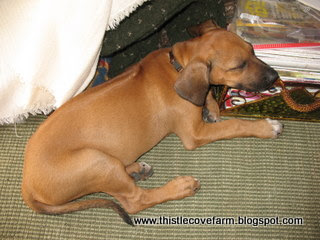 Someone, I believe Edith Wharton, once said, “My dog, a heartbeat at my feet.” She’s almost right as I believe, “My dogs, heartbeats at my heart.” There’s something special about companion animals and, more specifically, a dog. People who think animals are dumb are people who have never had companion animals. Once you’ve lived with a dog, in the house, at your side, you realize animals are not dumb. If anything, it’s the other way around, it’s we humans who are, sometimes, dumb.

Abigail and Sadie are still working out their roles; Abbie as big sister and Sadie as tag along. Even in sleep, they know their roles. Gracie is Grandma and just wants to be left alone. She’s patient with Sadie but doesn’t put up with a lot of puppy stuff. That’s Abbie’s role as we believe she’s younger, by a few months, years…who really knows? 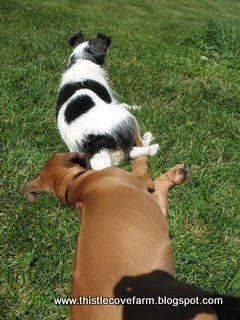 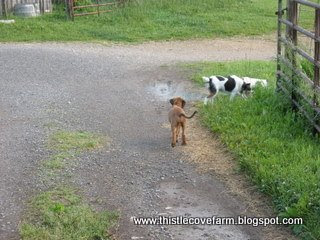 Here’s we’re headed to the barn to feed cats and horses. Sadie didn’t know to go around mud puddles but she’s a fast learner. Now she avoids them unless she wants to splash or, like Abbie, flops down into the puddles to cool off. Most of the barn cats are okay with the dogs and now with Sadie. All the animals here at Thistle Cove Farm must live together peaceably; it’s a fore taste of what’s to come…the other side of the veil.