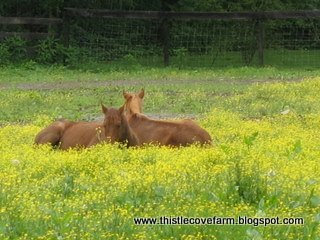 On the way to Whitetop Mountain two friends taking in the afternoon sun while another friend, below, watches peacefully. 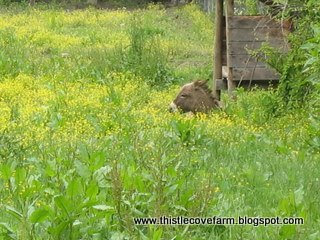 Spring means growing things, things that my grand’s ate to stave off winter’s chill, to bolster their immune system and also just because they tasted so dang good! Branch lettuce, also called cress, dandelion greens, burdock greens, polk salad to name a few and, one of my favorites – ramps.

Ramps are a member of the onion, leek, garlic family only taste stronger and smell a lot louder. There’s no in-between, a body either likes ’em or hates ’em. I loves ’em! Especially when friend with potatoes, onions, garlic and olive oil. HEY! There’s got to be some additional healthful benefits, eh? They are best eaten when they have just first pushed their little heads out of the earth, best when spring is still new and the heat of summer isn’t threatening.

All over the southern Appalachia’s there are Ramp Festivals; one of my favorites is the Whitetop Mountain Ramp Festival on the Rooftop of Virginia. It’s only 108 miles away, at the top of Whitetop Mountain the third highest mountain in VA at 5520 feet but it takes me close to two and a half hours to get there. For more than half the distance, the roads are two lane with more twists, turns, curves, S curves, switchbacks and the like to give a snake motion sickness. Sometimes there are guardrails. A large part of the drive travels along the stream that’s tumbling down the mountain and, while it’s beeeyouutifulll, my mind thinks ‘snakes’. No, I can’t say I’m afraid of snakes but I do like to give them a wiiiiddddeeee berth, especially the copperheads and the rattlers. I tend to let the garden snakes and black snakes live in peace, as long as they do likewise by me, but I don’t hold with poisonous snakes. I figure they crawl on their belly for a reason and who am I to question God?

While I’m on the topic of the Appalachia’s there’s a question that’s been bothering me for years. Probably all my life, really. Where are the Appalachia’s? I’ve always thought they were those mountains that were not the Blue Ridge but in researching, I find I’m, somewhat, right. Apparently, there’s a geological distinction. Virginia Places says the Blue Ridge are older, far older, than the Appalachian Plateau. The Blue Ridge core rocks are billion year old igneous rocks and the Plateau is far younger. Well, maybe or maybe not, but I do know God has made the simple things to counfound the wise and the beauty is there for all of us.

Gaynelle and Jeanne were my company yesterday and I only hope they had as good a time as I. Jeanne is a city gal but has lived in a small town for a number of years, she’s also a musician as are her menfolk. I knew she’d enjoy the music. Gaynelle is a country gal and mountain people are her people so I knew she’d be okay. And, me? I’m happy with all of it. These are my people, these old worn down smooth mountains are my mountains and I’m never happier than when I’m home in the hills. Give me some knitting or other handwork and I can sit and listen to folks tell tales for hours! To sit and watch mountain people play music and dance…God’s in His heaven and all’s right with my world. It’s a sermon just to be in attendance, a prayer to simply watch and rejoice.

The Whitetop Mountain Ramp Festival is a benefit for the volunteer rescue squad and fire department and the day’s activities include eating, mountain music and clogging. They were selling a half chicken -breast, wing, leg- and potatoes fried with ramps, green beans that tasted like they came from some Grandma’s pantry, a roll and ice tea for $6. At the day’s end they sold the chickens for $2 so folks could take supper home with them.

According to Southern Food, the ramp may also be called a wild leek although I’ve never heard it called that. It is native to North America and the name is supposed to come from “ramson” or “rams”, from an Elizabethan dialect. John Mariani, author of The Encyclopedia of American Food and Drink” says the word was first in English print in 1530 but was used earlier by southern Appalachian folks.

I do know the Elizabethan dialect is still in existence in the southern Appalachia’s. Dave and I have been to funerals, back in the hills and hollows, where it took three verses of Amazing Grace being sung before I recognized the song! The group of five men were singing acapella and it was beautiful but I’m far enough removed from the dialect that it took me a while to recognize the tune. 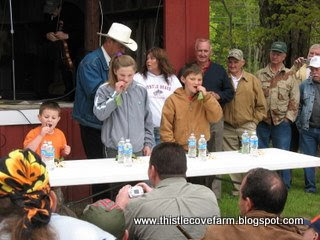 This AAAdorable lad was shoveling ramps down as fast as he could; ramp in one hand, water bottle in the other. They only had to eat the white part and could lay aside the green top. For this small gift, let us now give thanks. 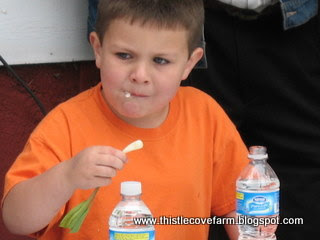 Volunteers make the world go ’round and this darling girl was dishing up ice cream. Yep, it was COLD but it’s never too cold for ice cream! At least this year, we didn’t have rain or snow. 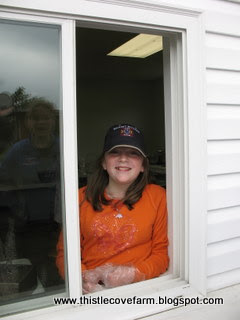 This dear woman was, easily, the oldest person clogging. While I didn’t get her name, someone told me she has more than 90 years under her feet and seemed plenty able to keep up with National Heritage Award recipient Wayne Henderson. He’s a well known name in bluegrass music for not only playing but making instruments. He does a lot to promote mountain music, he has a music festival and this year is giving away $15,000 in prize money as well as one of his hand crafted guitars. 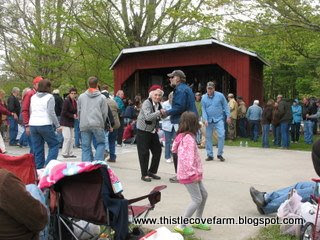 Some high stepping going on! 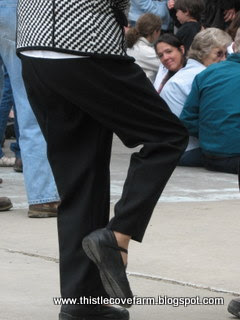 The word clog comes from a Gaelic word meaning time and this type of dancing has been done in the southern Appalachia’s since the early 1700’s. Or earlier, who really knows? 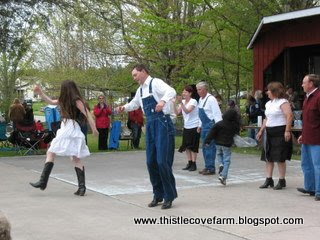 Here, a fine group of cloggers takes to the stage; please note the men have on their best bibs with pressed white shirt while the women look fine in their dark skirts and white blouses. All footwear have metal tapes to enhance the sound of the dancer’s feet as they strike the stage. 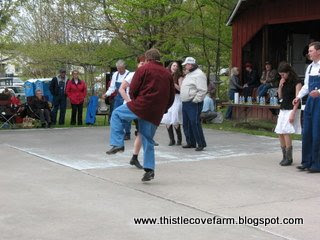 There were several bands and a fine group of cloggers but my hearing isn’t what it used to be nor did I write down what I thought I heard so you’ll have to take my word for it all. 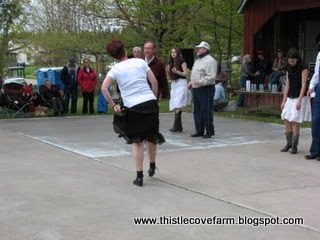 Ages ranged from young to youngish; clogging keeps the body limber, the blood pumping and smiles on everyone’s faces! It’s a combination of jigs from the Irish and Scots, English clogging, African high steps and a stomp attributed to native Americans. It’s fun, lively, energetic and keeps the weight off and is a bit more structured than flatfooting. Whatever you call it, it’s still mountain dancing but for more information, go to Bill Richardson and read his great article about clogging, flatfooting, 2-step and other mountain dances. 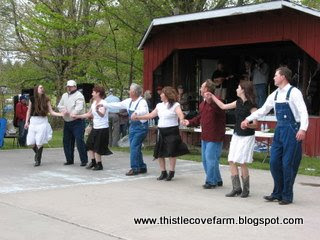 The cloggers line up to take a bow and then, still dancing, they exit the stage. The little gal on the far left is also an accomplished singer and guitar picker; I’ve heard she plays fiddle as well. 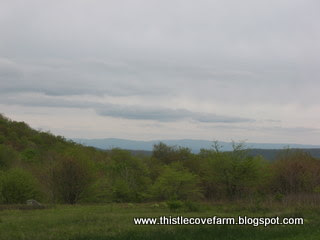 As we left Whitetop Mountain, I took this photo and it shows a portion of the Appalachian Plateau. Between the green and the clouds the Plateau stretches as far as the eye can see, as much as the heart can hold.