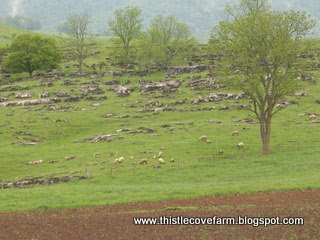 The Man of Questions paused and stood
Before the Man of Toil,
And asked, “Are you content, my man,
To dig here in the soil?
Do you not yearn for wealth and fame,
And this wide world to see?”
The Man of Toil still stirred the soil
And answered, “No, sir-ee!”

“Do you not yearn,” the Questioner asked,
“To pluck life’s higher fruits?”
“Oh, yes,” said he, “I’d like, maybe,
Another pair of boots.”
“And wouldn’t you like a coat to match,
And pantaloons and a hat;
And wouldn’t you like to dress as well
As your neighbor Jacob Pratt?”
“Why, I’d have duds as good as Jake,”
The Man of Toil replied;
“Why, I’d have clo’es as good as those
‘Fore I’d be satisfied.”
“But if Jake ran for selectman
And nothing could defeat him,
How would it do, then, just for you
To step right in and beat him?”
“First-class idee,” the Man of Toil
Responded with delight;
“I think I’d make mince-meat of Jake
‘Fore we got through the fight.”
“And then you’d settle down content?”
“Content? Of Course! I swan!
A man’s a hog who asks for more
When he’s a sillickman.”
“But, sir, our Congress is corrupt
And needs a renovation;
Wouldn’t you consent in such event
To take the nomination?”
“Oh yes I’d take the job,” said he.
The Questioner arched his eyes,
“Then don’t you think the presidency
Would be about your size?
Now after Congress had been cleansed
Beyond a shade of doubt
I think you’d go–you would, I know–
And clean the White House out.”
“I’d take the job and do it brown,”
The Man of Toil replied;
“But you hoe corn from morn till night
And still are satisfied.”
“Me satisfied! I guess that you
Don’t know me,” he began–
“Oh, yes, I do, I well know you
You are the Average Man.”

Sam Walter Foss wrote this and it’s as appropriate now as then. Daddy has always said about some folks, “They are going to set the world on fire just as soon as they find their box of matches!” You know people like that, surely. I do and, in my younger days, was probably one. I’ve calmed down now and have realized I’m simply one of a great many who are average. I’m content to shine in a narrow universe, to “be a friend to man in a house by the side of the road”, to encourage as opportunity presents itself, to “come when called“, to serve God in small, but faithful, ways.

Blessings ~ average men and women who are faithful ~ poetry ~ Daddy ~