Okay, my apologies to Mr. Dickens but, tell me, who among you could have resisted, eh? -smile- 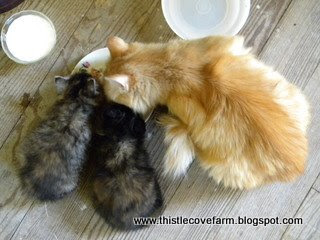 These, now lovely, kittens and their mother, were almost drowned a week ago Sunday. Red, our neighbor, called to ask if we would take the little family and allow them to live in the barn. Yep, bring ’em on, I told him and he loaded them into their cat carrier, put their litter box in the back of the truck bed as well and proceeded to come to the farm. He didn’t realize how full of water was the truck bed; we’d had rain for about two weeks straight and if trucks aren’t parked on an incline, the water collects and doesn’t drain out. 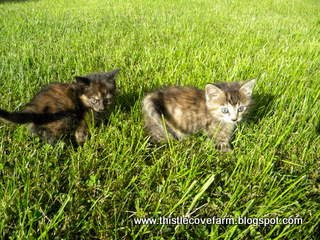 Red only lives about a mile away and by the time he’d arrive, the water had sloshed into the carrier and Old Yeller and her two kittens were a soaked, sodden, clayey Mess! I was headed to church and stopped at the barn to make sure everyone was settled in when I saw how dreadful everyone looked. I wrapped the kittens in towels and took them to the house where I fed them warmed milk with an eyedropper and then gave them a warm bath. I wrapped them up in dry towels and then used the hair dryer, set on low, to dry them and warm them further. When I’d finished their baths, there were enough towels for a small load of laundry!

On Monday I went to the barn to bring Mother back to the house where she got the same royal treatment. She is a dear thing, never once offered to bite or growl or hiss. I used a five gallon bucket, two third’s filled with warm water and placed her so she could hold on to the side with her front two paws. She had a sturdy grip and suffered her bath with a great deal of dignity and grace and then was wrapped in a warm town for toweling dry.

The kittens have been given two or three baths, each, and the mother has been given one bath. They are looking much better now than when they arrived and loving how they have been rescued. Tuna in water, twice a day, kitten chow, fresh water, a portion of half ‘n half each day…not a bad life for what started out so dreadfully. 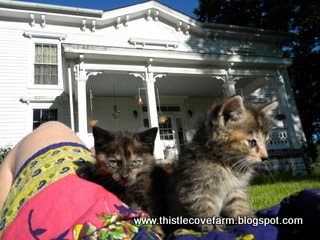 If the day is sunny and warm, I take them to the yard for play time which they enjoy. They are kittens and if there’s anything so fearless and unafraid as a kitten, I’ve yet to meet the animal.

The little family is ensconced in the parlor…the very same one that Still Needs Repair from the flooding back in December 2008! At least they can’t do very much damage…sigh…it’s already a wreck but I Am Very Hopeful work shall begin this weekend and the little family will be moved to the granary to live. They will be fed and watered everyday, have wool fleeces to sleep upon and, eventually, be spayed and given vaccinations. Some humans should live so good.

This little family isn’t the only new life we have on the farm but that story will be continued another day. Right now, I’ve got to get this posted so I can get a morning snack ready for others.