We’re the third owners of Thistle Cove Farm, at least, since The Late Unpleasantness as Leslie Shelor once told me. I’ve always called it The War of Northern Aggression but I do believe I’ll change my mind and, henceforth, it shall be called The Late Unpleasantness. But I digress. Sometime in the late 1860’s or early 1870’s this farm and some few thousand acres, with barns, stables, smokehouse, slave quarters and home were sold for $300. That princely sum reflects the back taxes owed at that time and an Ohio carpetbagger named Shadrach Meshach Abednego White bought the whole kitncabootle and moved his family south to the Promised Land.

They resided here, in a brick house, until that home caught fire Christmas holidays of 1899. When Mr. White was found, playing poker at the neighboring Joe Black Store, he said, “Let ‘er burn! I’ll build me another one, bigger and better.” Or, so the story is told.

Build he did and what he built was a white frame house because, as he put it, “a brick house would burn.” It’s not recorded if someone asked about a frame, or clapboard, house burning but I do wonder.

Until 1948 this farm was owned by the White family but was then sold to the Gillespie family. The Gillespie family came here, to the Cove, when a Lt. Gillespie…sorry, can’t remember his first name…brought a kinsman of Dave’s, a Bowen, back from the Battle of King’s Mountain. Mr. Bowen…sorry can’t remember his name nor his title…was wounded at King’s Mountain and was brought home to either die or be buried.

So. The Gillespie feller brings the Bowen feller back home and Gillespie meets a Bowen daughter. Wedding bells, banjer picking and the scene fades.

I don’t believe the Gillespie’s ever lived here but rented out the farm and homestead. From 1948 until we bought it in 1995, it was never owner occupied. Consequently, the farm became “community property” and was used by anyone, anytime for almost any reason. 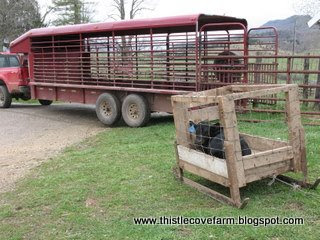 This I was told when we first moved here and someone said they would “be by later ’cause they needed to do something.” Needless to say, that ended. Rather abruptly some would say but it did end. I could see all sorts of contentious, possibly litigious, situations arising and “No Tresspassing” signs were put up immediately.

As we’ve become better acquainted with our neighbors, and distant kin, we’ve abated our stance. As long as someone asks permission or it’s an emergency, some of the lots are allowed to be used by folks as needed.

Whew! Did you get all that? Stay with me, I’m getting to my point. 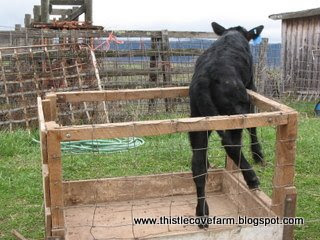 This little feller was constipated, hadn’t had his first poop yet and that’s a not so good, very bad, terrible thing. Life threatening as a matter of fact. So, he came via a sled and Mom was walked to our driveway and then Mom was loaded onto the trailer and little one decided It was Not All Right with his little world! He rallied and then climbed out of the sled but I managed to catch him with one hand and take our picture with the other hand. 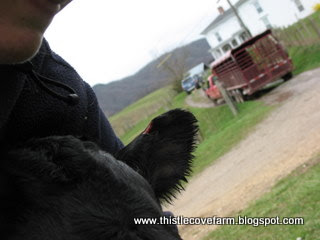 Red, a neighbor, gives little one a sled ride to their farm so little one can be given an enema. Better you than me, little feller! 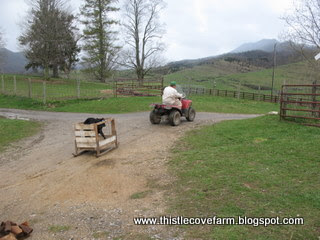 I once asked Bill how many cattle he owned and he replied, “Do you means cows, yearlings, heifers, bulls or calves?” I looked at him and said, “Bill, how many moo-moos do you own?” We’ve both laughed about it because, at that time, it simply never dawned on me to distinguish between them.

But, as many cattle as anyone tends to, it all belongs, ultimately, to God. Psalm 50:10 says, “For every beast of the forest is mine, and the cattle upon a thousand hills.”

Blessings ~ beef, it’s what’s for dinner! ~ neighbors ~ legacy ~ and, some would say…an enema ~