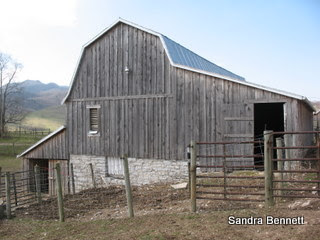 Sheep Shearing Day is 4 April and I’m frantically getting ready for this working day on the farm. It’s always been open to the public with no entry fee. Generally, visitors have been families, older people going on a ‘Trip to Bountiful’ -delightful movie yet heart tuggingly poignant’ and a few looky-sees who see the event listed in calendars, local newspaper or stumbled across my blog or website. This year I’ve posted the event on Ravelry and on Mary Jane’s Farm and, if the number of phone calls and e-mails I’ve gotten are any indication, we may have a Very Large Crowd.

Our stables are pre-War of Northern Aggression and built on hand cut limestone blocks. About three years ago, we had the original barn siding covered with rough cut hemlock which greatly improved the looks, added value and structural integrity and just makes the farm look loved and well kept. The first summer we did this, people would come by and stop in the road just to watch work progress or tell us what a fine job we were doing in restoring this farm.

Do any of us ever get enough words of encouragement or compliments truthfully spoken?
“But everyone who prophesies speaks to men for their strengthening, encouragement and comfort,” so says I Corinthians 14:3. Word have great strength and, in times past, names were given great consideration prior to a child being given a name. Not only could one tell from what family the child was born into, one could tell whether the parents had hopes, dreams, aspirations, despair or lack of vision. Often, when I meet a person and hear their name, I will later research their name to see if it’s fitting for them. Often times it is quite appropriate and other times I simply wonder, “just what were their parents thinking?…”

Thistle Cove Farm has become not only a labor of love but our life’s work and we’re much closer to completion than when we began fourteen years ago. We still have a couple of fences that need replacement but, perhaps, can squeeze another year or two from them. There’s the garden lot, about half an acre, that needs a lot of work; nut and fruit trees need to be chosen and planted and the vegtable garden needs to be laid out within that same area. 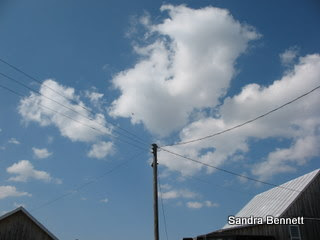 But today we cleaned the barn of winter’s detritus, the uneaten hay, bits of wool, baler twine and the like. The barn was nice and cool and there was a lot of air traffic, at least half dozen small planes and one helicopter that was, from the sound of it, the med evac copter. I always say a prayer for the safety and well being of folks when I hear the med evac copter or see a wreck on the road or hear the sirens. One day that may be someone I love or even me and I like to think there’s someone, somewhere praying.

Just to the upper left of the pole there’s a speck in the sky, that’s one of the planes. There were so many beautiful clouds it was difficult to see the planes and copter, they kept going in and out of coverage. 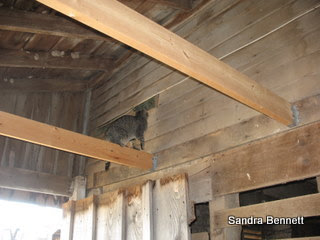 For some reason, Bos Man decided climbing the rafters would make him happy. First he climbed the door, then jumped on the rafter and peered into the barn loft. That’s one of the places the barn cats hang out so, perhaps, Boscoe was saying hello. He and Abbie kept me company all day and Gracie would visit every so often. Mainly she laid under the truck and watched the proceedings from a safe distance. 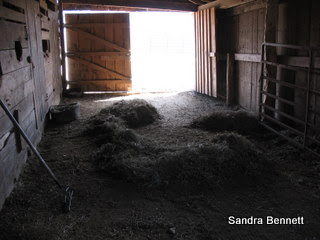 There were six or eight wheel barrow loads of hay taken to the burn pile. I don’t know why I call it the burn pile as rabbits have since moved in and I’ll, probably, never strike a match to the pile of tree branches, hay and other stuff. It’s in the middle of the garden lot and provides a lot of cover for rabbits and birds. I did notice the blue birds were nesting yesterday. Last week, I’d cleaned out their box so it was ready for them. I’m ashamed to say, I’d either forgotten to clean it last year OR they had built two nests…not sure which but there were definitely two nests in one box.

Down at Clinton’s, there’s a lambalanch going on; he has one of the largest flocks of down breed sheep in the Commonwealth and lambs somewhere around three to four hundred lambs every spring. I enjoy riding down the road to see the newest lambs on pasture but have learned the hard way, to NOT stop the Ranger to take photos. When I’m driving the Ranger, they associate the motor with the ATV’s Clinton uses and the yo’s, as they call the ewe’s around here, will rush the fence, thinking it’s food and the lambs are liable to get injured or even trampled to death.
It’s almost as dangerous to stop the truck but they aren’t as used to my truck so don’t react as speedily. 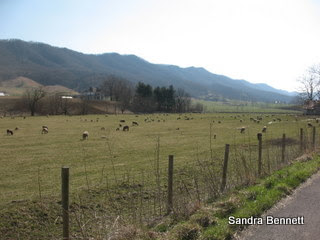 The lambs have learned to drink, almost, on the run because the mothers are eating spring grass. It takes an amazing amount of food to nourish both mother and lamb and calories are needed in high quantities to keep both well and healthy. In short order, lambs combine drinking milk with eating grass but for the first few weeks of life, it’s the milk that sustains them. 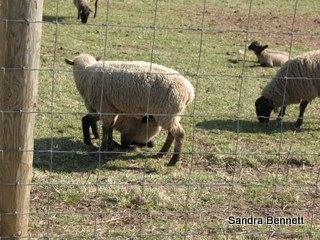 This little one is sated and chewing cud while drinking in sunshine. 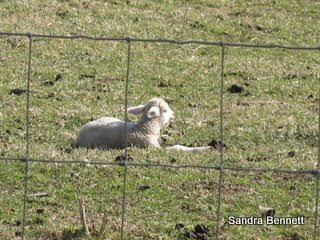 Abigail, my faithful co-pilot. Again, not the safest thing to do but I’ve got a firm finger thrust threw her collar and we’re traveling at a slow rate of speed. It was my intent to juice the truck battery a bit, enjoy a bit of the spring day, see Clinton’s lambs and pray a prayer of thanksgiving and joy for the Oh So Many Blessings in our lives. 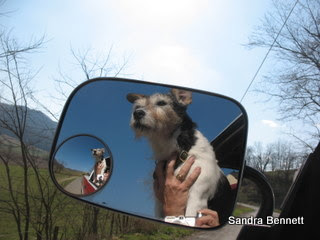 Abbie is ever viligent as we travel down the road. 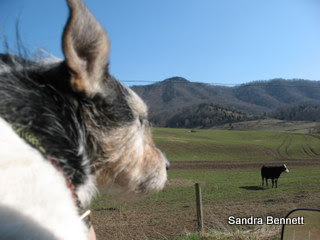