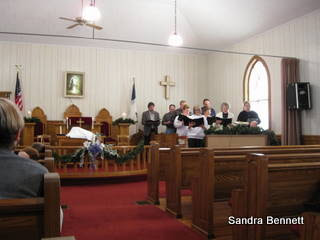 ~” It is well to remember that the entire population of the universe, with one trifling exception, is composed of others.” ~ Andrew J. Holmes

YEOUCH! How true, how true. Sort of goes against the grain of the I’m Okay, You’re Okay mindset, doesn’t it? Or, is that just my muddled thinking? Kathy, over at Spot on Cedar Pond had this quote on her blog and it struck a chord with me.

We went to our little country church today and, in spite of the cold, rainy weather, we had a good turn out. Our little church has a surprising number of children; today we had seven ranging from around five to eight years of age and two babies in arms and that with the adults numbering around twenty-five. We’re a small church in numbers but have a far reaching impact into the community and every Sunday prayer requests and praises are told by the congregation. Today was no exception and it seems there are few who aren’t afected by death, illness, sorrow yet we share our blessings just as readily. This photo was taken a few Sunday’s ago, on February Communion Sunday but it’s just about the same folks so who knows but me? That and I’m not in the choir where I go when we get there early.

As much as we’d like to see a bit of sunshine, we’re grateful for the rain because it brings the water table up. We’ve been at a deficit for the past few years and it’s good to have water in the form of rain. I enjoy snow but it takes about five inches of snow to equal one inch of water so water is quicker. Now if it was just a trifle warmer! -smile- 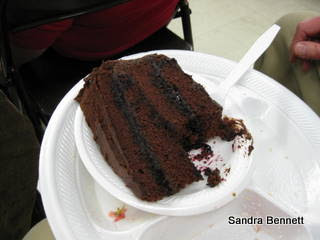 On Saturday nights Dave and I will, often, go to the auction where we get supper and entertainment all for the price of about $10 a person. Home cooked meals are served and I’ve dined like a Queen on meat loaf or chicken broccoli casserole, green beans, mashed potatoes, gravy, cole slow potatoe salad, pickles, beets, sliced tomatoes, cucumbers, a soft drink, water or coffee and my choice of desserts – chocolate cake, chess pie, pecan pie, banana pudding and ALL for less than $10! I mean…who even wants to think about cooking when food like that is available on date night!?

This seven piece horsehair Victorian setee sold at $650 and was a steal, in my book! I couldn’t believe this beautiful furniture went so inexpensively. Dave said it’s because most people don’t have the house where this furniture 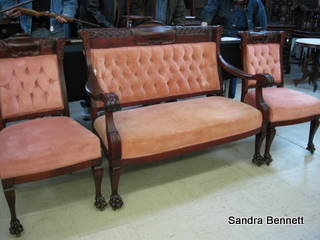 could be used to best advantage. We do but don’t need the furniture and, like most folks, it doesn’t really suit our lifestyle. Somehow, I can’t see being so cavalier about a dog getting on this Victorian furniture as when they snooze on crate furniture.

This is the Lane cedar chest we bought to replace mine that was damaged in the flood. When I saw the spinning wheel on the side of the chest my first thought was, “Back Off! This chest is MINE!” And, thank God, it is mine and now sits in the middle of the living room floor because we can’t get the de-construction and re-construction work done until warmer weather. That’s okay though, spring is coming! They had a couple of Hooser or Sellers cabinets; both in better shape than the two I’ve got but one was Dave’s mothers and it has sentimental value so we’ll keep it. The other I bought from a friend many years ago, so we’ll keep that one as well. Last Sheep Shearing Day someone came to find me and asked, “Are the antiques in your farm office for sale?” I was puzzled because I don’t think of things as “antique”. 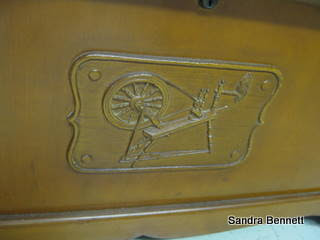 I use them, almost daily, so they aren’t antiques, they are just old pieces still earning their keep. 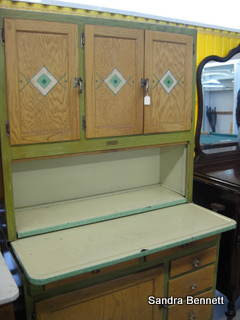 This horse drawn hearse sold for $14,500 and was a real nail biter! It was, easily, the most expensive thing sold that night and was between two gentlemen. One gentleman was a younger man and the other was, perhaps, in his 70’s or older. The auctioneer would, very carefully, keep enthusiasm and excitement high as he worked his bidders. Finally, after what seemed like thirty minutes but was, probably, about ten minutes, the older feller nodded on the final bid. I couldn’t help myself, I burst into applause because it made me happy the old man got it. I haven’t a clue what his story was and really it’s none of my business but I’m still happy he got the hearse. It’s best not knowing his story, this way I can make up my own story -smile-. 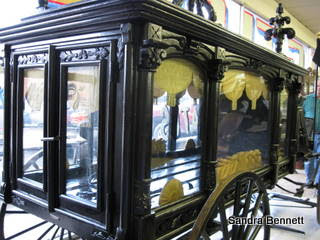 Persian, or Iranian, rugs ~ how absolutely LOVELY! It used to be, and perhaps may still be, each village had their own family rug weaver and within those weavers, each family had their own design or designs at which they excelled. Some might be known for the Tree of Life, others for Village Life and so on. These rugs still had their original tags on the back and the threads per inch were outstanding! Some more tightly woven than others but all rare and beautiful and hardly used. 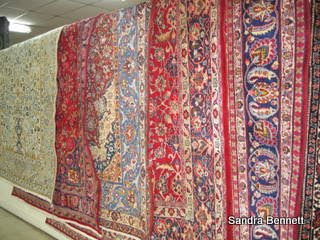 We did buy some of these rugs and have them safely rolled up until the rooms are finished and ready to be used again. We always enjoy auction night and, eagerly, look forward to them.

I still haven’t gotten to the vet’s to get a couple of kittens. I keep thinking how lonely the house is with only two cats and then I think how much Miss Kitty is enjoying being Queen Cat. She’s the one with cancer and I’m torn between her last days being Just Her and bringing in new life before my heart gets ripped again. We do have Miss Hattie Cat, she was three in November and a barn cat brought to the house to die. Unfortunately, sometimes the kittens have to get sick before I can get my hands on them. That cold January night, three years ago, when I brought Miss Hattie to the house, I was sure she wouldn’t make it through the night. Now, she’s Miss Hattie Cat, Thug Extraordinaire, and rules…err, makes that reigns terror on everyone else. She’s a bundle of muscle and nerve but is calming down a bit. At least now she’ll let me pick her up and love on her for a few seconds before saying, “okay, enough is enough. You may need it but I don’t!” and off she pops.

Maybe I just need more kittens for me, eh? Remember the story of the young pregnant woman who went to the older woman for advice? The younger woman was pregnant with her second baby and said, “I just don’t understand how you do it! You’ve got six children and they all seem to be healthy and happy. How DO you divide your love between them all?!” The older woman smiled and said, “Oh, no dear. You’ve got your arithmetic all wrong. You don’t divide your love, you multiply it!”

And, isn’t that so with life? When we divide our love, we short everyone, including ourselves. When we multiply our love, we see God the way He wants us to see Him…loving others as much as we love ourselves.