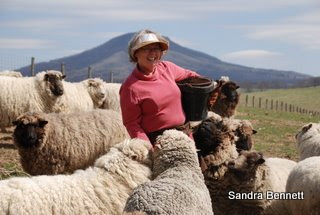 We’ve had a couple of warm, sunny days and that means farm chores. This week the farm chores are getting done in bits and spurts due to a photographer following me around for Country Magazine.

Country Magazine has asked me to keep a farm diary and it will be in their June July 09 issue. This has been a different sort of reality for me, being on the lens end of the camera as I’m, usually, the one taking photos. The photos here are taken by Mary Quesenberry, a photographer friend, although the watermark still says my name. All my usual chores are being done in “photo bites” so Mary can take advantage of the weather. Today, Wednesday, it’s raining so I’m catching up on blogging, e-mails, yarn and roving orders…that reminds me, I need to head to the farm office and take photos of the roving.

Dave says my sheep are my pets and he’s right. They have names, although I tend to get some of them mixed up and, perhaps, one or two of the rowdiest don’t have names other than “you big heathern!” They come when called and will follow me from pasture to pasture because they know there’s, usually, a treat of whole corn involved. Sisters Carly, Sophie and Beryl, along with Carly’s twin sons, Samuel and Sampson, will paw me if they feel they aren’t receiving their fair share of corn. I’ve given up explaining to people that, “no, I am not an abused woman but a beloved woman…beloved of her husband, her dogs, her cats, her sheep and her horses. And, trust me, every one of the above has given me their share of bruises and knocks to show me just how much they “belove” me! (Post Script – in re-reading this, it amuses me to see I’ve given Dave “credit” for “beloving” me. That is true…we were walking up the back walkway, I stumbled and would have fallen except Dave grabbed me by the upper arm. In doing so, he left his handprint in the form of bruises. I gave up explaining to people what had happened and just let them wonder! -smile-)

I wouldn’t give up the bruises for anything though; it’s a fabulous life! 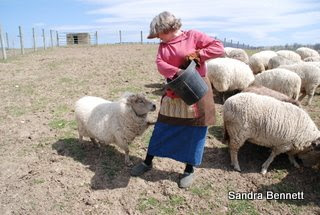 Carly is pawing me to let me know she’ll take some corn NOW, please! The building in the background is where water used to be stored. Via a windmill, water came up the hill, from the underground river that, eventually, becomes Maiden Spring and then the Little River. This building is all that’s left of a much larger structure and I use it to store a few fence posts and other odd things. 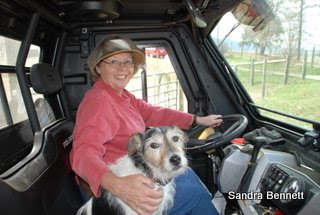 Abigail and I are off to hunt for ramps. It’s a rite of spring around here but as I found out, it’s too early for ramps. They are just beginning to poke their little heads above the fallen leaves so it will be another week or two before there’s enough for a mess. They are a member of the onion and garlic family but a bit more full of flavor -smile. That’s a better way of saying “they stink!” Dave and I both love eating them, especially when mixed with potatoes, garlic and onion…the more the better except we try to remember not to eat them near the end of the week or else no one wants to sit with us at church on Sunday.

Most days I wear a skirt or dress with apron. I find aprons give me extra pockets and a skirt reminds me to slow down, take in the sights, smells and sounds of Thistle Cove Farm, to enjoy this great blessing and gift God has given. I’ve always worn jeans at Sheep Shearing though; I really have no desire to show J. Q. Public the color of my undies! 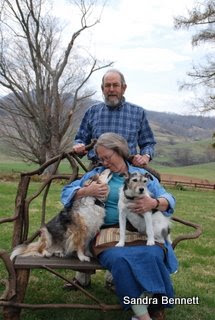 A Giveaway a Day just e-mailed me and I’m giving away some yarn on her site. It should be the 9th – 10th of April, a bit after Sheep Shearing but just in time for my birthday on the 11th.

it’s pouring rain and cold with a wind making it even colder. A good day to stay inside, except for necessary chores. We’ve got to go to town for haircuts and other errands. Our neighbors, Ginny and Tiny Tot her sister, are both in hospital. Both women are in their 80’s and, like all of us, slowing down a bit. They were born and raised on their farm and, for a large portion of their lives, have lived on their farm. I love visiting their big country kitchen and it was a shock when, yesterday, I went to the back door and turned the door knob only to find it locked. During the day, like our house, the doors are never locked so I knew something was wrong and later found out the problem. They knew my mother-in-law for all their lives and brings home, once again, how we’re all connected in this small valley. A good many of us are kin by birth or marriage and the rest of us are connected, somehow, someway.