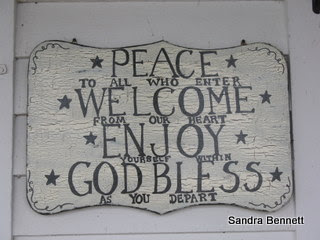 Oh My. Why is it the day comes earlier when you get to bed later the evening before?

Dave and I went to a new Japanese restaurant in Princeton last night; we met some business associates who have now become friends. Nelson and Diana are smart, funny people who have raised some fabulous children. Their son has been trading in the stock market since he was 16, of course with parental supervision, and has become quite the investor. He really impresses me because he’s so well versed in a number of topics. I’ve not met the daughter yet but she’s off to grad school and on a full scholarship so I’m looking forward to meeting her as well.

The Japanese place is “restaurant theater” where people sit around a common table and the chef wields his knives with lots of flash and fury. The food was really good and the company was even better but we didn’t get home until 10:30 or thereabouts and I’ve been up since a little before 5:00. I just had enough sleep…imagine that!, it astonishes me!…and got up to start the day. Fran came over to help me but at 6:00 I wasn’t quite ready to head to the barn so put her on the sofa and she caught a couple more hours of Z time.

I went to the pasture at 7 a.m. because I thought Zach was cast; it turns out, he was only soundly asleep and, more than, a trifle put out I awakened his slumber. While at the barn, I fed the barn cats, opened up all the other buildings in preparation for the day’s work. Back at the house, Dave told me he’s off the farm, working today, but had made appointments for The Furnace Man and the Ranger repairman to both show up.

That’s been my morning and afternoon plus

two loads of laundry, washed, dried, hung and put away,
baked 5 pans of shortbread and delivered 1 to a neighbor just out of hospital, will deliver others tomorrow and will take some to WV family,
found out the strawberries are in and had to run get them,
The Furnace Man showed up, made a pot of coffee for him while he worked on furnace,
Ranger repairman showed up, needed more tools, went back to the shop, returned and has been here several hours -the Ranger needed a mirror put on and a leak stopped, turns out they were both related but more of a job than first anticipated…but then, aren’t they all? -wry grin-,
saw Zach in the same spot, rushed to the pasture and moved him back to the barn as it’s supposed to be cold, rainy and windy tonight; he’d surly die in this weather should he be left with no shelter,
Fran comes to tell me one of my horses has wire caught up in her mane; grabbed scissors, headed to the pasture and, while there, trimmed manes of two horses. Took manes to studio so I could use them in spinning yarn,
froze 6 quarts of strawberries after putting them in seal vac packs BUT a handy little tip for those who use seal vac packs…put the berries in the quart seal packs then freeze the berries FIRST and the next day, go back and vacuum pack seal them. If you put the berries in the packs and then try to vacuum seal them, the berries will crush, the juice will run out and it’s all fairly ruined.
packed for quilting tonight,
made flyer’s to take to tourism office, vet’s office, art center on my way out of town tomorrow,
gathered embroidery to take to WV, still need to gather two coolers as one is being returned to Daddy and the other will be packed full of steaks to bring home. My sister-in-love is headed to the slaughter house and they have US prime steaks that are out of this world! Their sausage isn’t too bad either.

Cove Community Association met tonight and we’ve got some interesting programs planned. The CCA will sell hot food and drink at Sheep Shearing Day to fund educational programs. We’ve started a new blog, a Very New Venture for us; we’re the kind of people who, quietly, tend to our own lives and our own business so a blog is a Very New Venture. Although there’s no post, yet, there is a lovely photo of the Cove, where we all live.

It’s been a Very Long Day and I’m headed to bed. Quilting Bee was good although I mainly caught up on valley news. Some might call it gossip but when it’s kindness and not malice it’s news and not gossip. That’s my story anyway -smile-.

P. S. The sign, at the top of this post, is hung on the back porch at the back door entry. Pretty much sums up Thistle Cove Farm life.