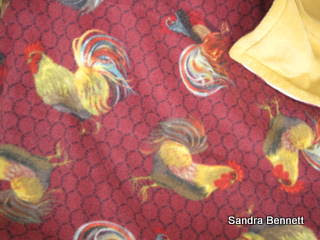 We’re in the midst of a winter storm, had about six or eight inches of snow last night and it’s still snowing. The wind is calm so the 26 degrees F feels like ten degrees warmer and it’s not long before I’m shedding layers of clothing. When it’s frigid cold, nothing says comfort like being warm whether layers of clothing, a hand made throw or home made soup. Work is my panacea for just about everything that ills me, no matter physical, emotional or spiritual.

I’ve heard it said that Appalachians fight, pray, work and drink just about better than anyone and me and my near kin are no strangers to the middle two. We’re not much on fighting or drinking but I’ve sit, fairly enthralled, as an older cousin told tales of his exploits as he ran the roads in his younger days. Why is it some of us waste so much of our youth on craziness? I fairly weep when I think of all those days I could have been doing some good as opposed to being a layabout and gadabout. Oh, I never did anything tremendously wrong but youth was such a complete and total waste on me. Perhaps that’s one reason I so enjoy being productive now.

The rooster throw, above, is for my Beloved Sistah; she has a rooster themed kitchen and it’s never been a problem finding gifts because I focus on roosters and chickens. When I found this fleece material, I knew immediately it was for a throw for Beloved Sistah. The throw back is a bright yellow that beautifully complements the rich colors on the front.

This baby quilt is ready to be birthed then hand quilted and finished. I’ve never been one to use pastels for babies…simply too drab…and I really like this flannel material that depicts travel. The lime green adds a bright touch and the flannel material will keep baby warm. I haven’t a clue where this quilt will go but there’s always a need and it always seems to find me; at least, now I’m one quilt readier. 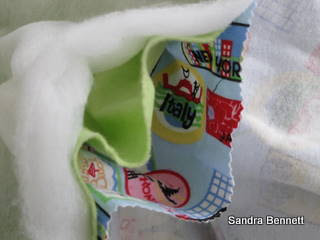 John Deere fleece throw is for my BIL who is retiring soon from a corporation and then wants to farm his family farm. This throw, probably, isn’t large enough but it will keep his torso warm as he’s napping in his recliner. 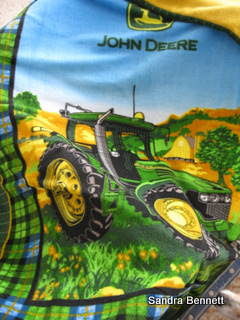 Maiden Spring is underground until it emerges here, down the road about two miles. It’s our water source and as pure and sweet as only limestone water can be. 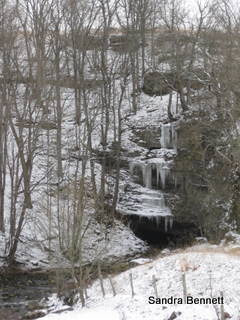 Round hay bales remind me of Shredded Wheat cereal sprinkled with sugar. 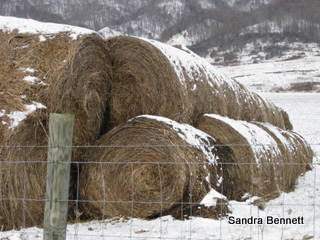 Every morning I feed the horses a small bit of alfalfa. They have round hay bales to eat whenever they want but I enjoy giving them a bit of a treat. Also, it allows me to eyeball them, making sure everyone is well, on their feet with no problems. 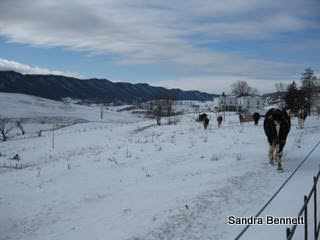 Abigail, my rough coat Jack Russell, is my constant companion and helps with farm chores by making sure everything is all right. She gets from pasture to pasture, lot to lot by jumping through the fence. She looks like a pole vaulter as she leaves the ground, twists her body as she clears between the two fence rungs. 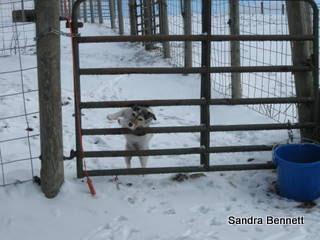 Our stables is also our hay barn and where we store square bales of sweet smelling alfalfa hay. The barns and other outbuildings are sided in rough cut hemlock which we’ll allow to age naturally. These old barns were here prior to the War of Northern Aggression and will be here long after we’ve gone. 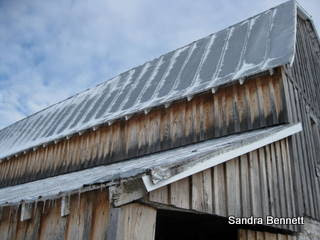 Boscoe, our back porch cat, enjoys slumming; he goes to the barn in the mornings to make sure the barn cats are kept in their place and he gets a bit of Meow Mix as a treat. The barn cats get Meow Mix cat food and, up at the house, Boscoe gets Purina One. The Meow Mix must be more highly flavored because TC also used to enjoy slumming and would insist on being given Meow Mix when she visited the barn. 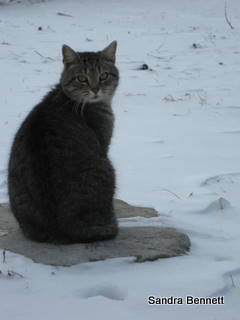 Goldy, the gold fish, swims in the water trough where s/he keeps algae at manageable levels. S/he was purchased in a 5 for $1 group about ten years ago but is the only survivor. Frankly, I think s/he ate the rest of the bunch. He gets a bit of cracked corn or sweet feed as a treat but seems to have done quite nicely on algae. Dandy Man, one of my American Curly horses, is looking into the trough, probably trying to figure out if it’s worth trying to get those bits of cracked corn. 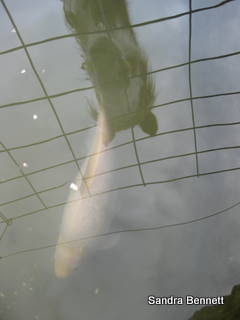 This is Thomas; poor old, trembly, frail, fragile, toddery Thomas. But, he still loves to eat cracked corn, sweet hay, minerals and drink warmish water so I still tend to him. I have huge loyalty issues, have you guessed? 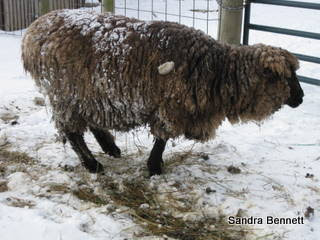 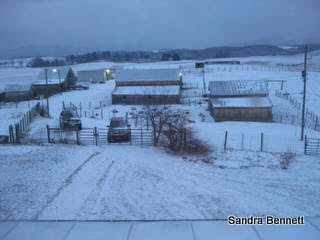 Until we purchased the electric water bucket, this is what I had to look forward to every morning. 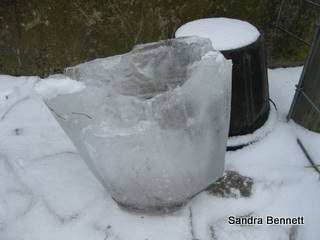 The walnut tree in the back pasture looks lovely against the skyline. 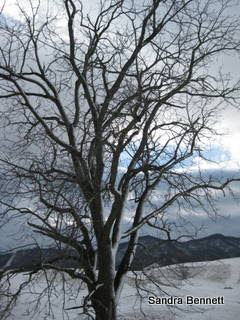 So, this is my day at Thistle Cove Farm. After chores, I head to the studio where I work on projects and enjoy my day. In the winter I listen to books on CD but in the summer the windows and doors are kept open so I can hear God’s voice in nature. The crock pot is full of soup, there’s cheese and garlic bread waiting for the toaster and all’s right with my world. Hopefully, it’s the same with your world.