The weather has been, typically, both spring and winter like recently. One day we’ll have snow, blowing snow, high winds; the next day we’ll have sunshine, high winds; the next we’ll have high winds, snow, sunshine…a little mix of everything but the one constant is mud. Mud cakes the horses but I don’t clean them because the mud also acts as insulation, just like the snow when it falls upon their backs. They stay warmer during these nasty, bone chilling below zero winds that have been blowing recently.

American Curly horses are a rare breed horse who are, usually, hypoallergenic for those suffering from horse allergies. Curly horses don’t have dander which causes a lot of sneezing, wheezing, sniffling and snorting in humans with horse allergies. The earliest account of American Curly horses is by the Lakota Sioux who wrote of them in their 1800 Winter Count, aka calendar. Curly horses were ridden by the winning side in the battle of the Little Big Horn and were always the horse of choice for warriors, chiefs and medicine men. It’s unknown where the Curly originated. All things being possible, they could have come across the land bridge prior to the big split between Alaska and Russia. They could have been here already, a “natural” occurrance in Nature. One thing is for certain, they are totally unlike the Russian Bashkir Curly of the Ural Mountains. Those Curly horses have curls, are smaller in stature but have a seriously nasty disposition; not the calm, curious, kind nature of the American Curly horses. In all the years of having Curly horses, I’ve never had one person who could specifically say they were allergic to the Curly’s. The one man who was sneezing, snuffling, snorting, etc. said he could have been allergic to the sheep, the grass, the hay, the dogs, cats even the air. Poor guy; his wife was Absolutely Adamant he Would Overcome His Allergies so he could Ride Horseback With Her.
WHEW! Sometimes I wonder how that marriage turned out. 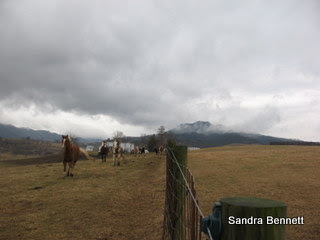 Meri Go Lightly leads the herd as they race to get the choicest flakes of alfalfa I’ll throw across the fence. These horses are ‘easy keepers’ and I don’t feed them a lot of rich hay which could cause colic and even worse health problems. They get a flake, or bat as they are sometimes called, every day and free choice hay as they want. The free choice hay is in one pasture and I feed alfalfa in another pasture so they get plenty of exercise. 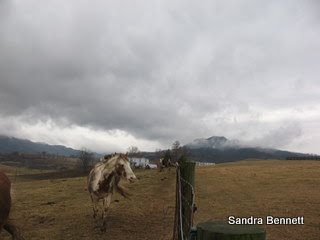 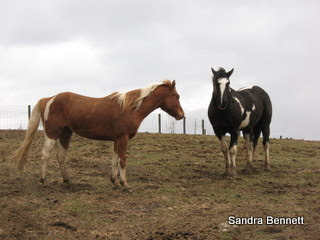 Horse Speak:
Dani Girl: Hey Big Feller! Would you like to rub noses? 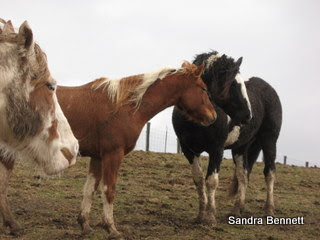 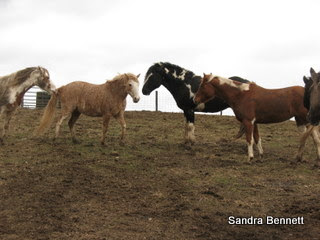 Peaches: I’LL SAY WHO CAN RUB NOSES AND WHO CAN’T RUB NOSES! I’M ALPHA MARE OF THIS HERD! 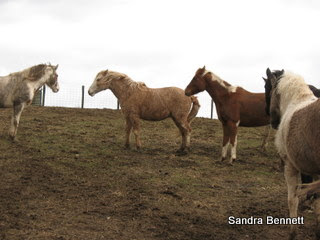 Peaches is now backing into HayJ to let him know he can either ‘immediately move!’ or risk a kick to the chest. Now, even though HayJ is a bigun, he knows enough to know a chest kick will hurt like the dickens. He moves away while Dani Girl is wondering who died and left Peaches in charge. 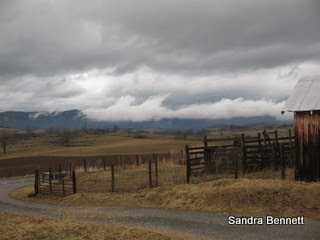 This week we’ve had snow one day and clear weather the next…all week long. The clouds have been so low, the mountains have been blocked from view. 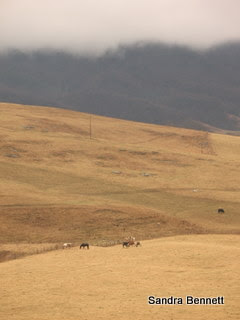 Every morning I count heads, both horses and sheep, to make sure everyone is on their feet. Then, and only then, do I allow myself a cup of coffee. If there are problems, I dress and head out to the barn and/or pasture before coffee. 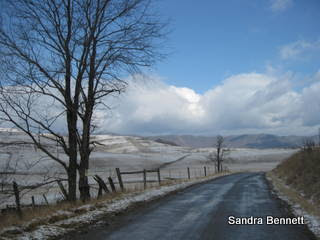 Yesterday, all day long, it snowed like it was never going to stop. Abigail and I took a ride down the road in Ranger, our Man Magnet, and found several opportunities to take photos. The above photo is coming back home, down Cove Road, looking toward the end of the valley. 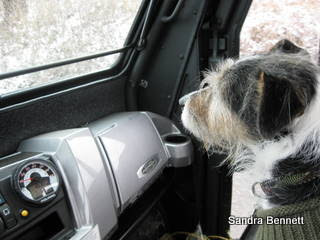 Abbie, wearing her Army green sweater, takes her job of shotgun quite seriously. 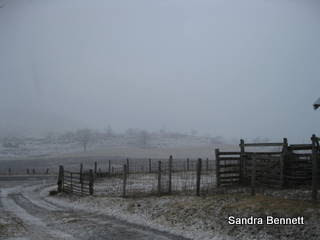 When I’m standing in our driveway, down at the barn lot, I can usually see quite a distance. Not yesterday though; visibility wasn’t good at all. This is the same view of the photo after the horses, above. 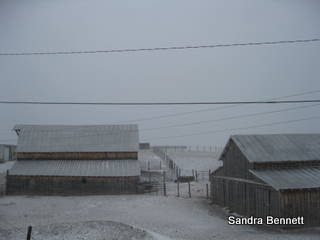 Usually, looking towards the barns, I can see Morris Knob in the distance. Morris Knob is the tallest mountain in our County and stands at about 3400 feet. Thistle Cove Farm is about 2400 feet and the coldest recorded spot in the county. Makes me shiver just writing the words! Our expected weather for the next week is snow, snow and more snow. God alone knows how much snow we’ll get but I’m trying to get ready for anything. 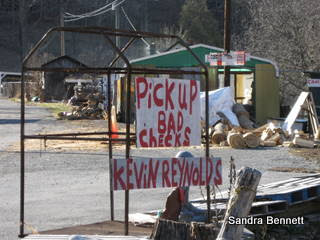 I love this sign! Whenever we go to Abingdon, Bristol or beyond, we pass by this market where the folks who have written bad checks are given a, very public, opportunity to make amends. The name always changes so perhaps amends are made. I hope so; how unfortunate the circumstances that would cause one to have their name on such a sign.

When we’ve left this old world, the only thing we truly leave behind is our name. Everything else is something we’ve only held onto for a while, things that belonged to someone else before us and will belong to someone else after us. It’s our name, our good name, we leave for all posterity. Live so your name will be uttered fondly with kindness; live so your legacy is a good name.
Proverbs 22:1 “A good name is more desirable than great riches; to be esteemed is better than silver or gold.”