Most days I go like my feet have wings. I wake up when the sun wakes up, usually, although lately I’ve been sleeping in…a lot. When Dave’s mother was alive, I slept lightly because I needed to make sure she got back to bed, safely, when she awoke during the night to use the loo. An overwhelming majority of elderly, break a hip then they fall but Mrs. B. had the bone density of an 18 year old so my concern was she would stumble and fall, then break a bone. I slept lightly.

In addition, Shaddie would wake me during the night. As an older girl, she had to use the bathroom about every four hours and I needed to awaken to make sure she got outside. I slept lightly.

So, for years and years, I’ve not had an uninterrupted night’s sleep at home. Dave will tell anyone who will listen I am the most sensitive person he’s ever known to sleep depravitation and missing a meal. In both cases, I tend to hit the wall fast and hard and “cranky” doesn’t even begin to define me. I’ve really enjoyed my l-o-n-g restful nightly sleep lately but know it’s coming to a shorter end. As days lengthen and the sun comes up earlier, I’ll get up earlier as well. I enjoy being awake during daylight hours and, just as much, enjoy being asleep during dark hours. 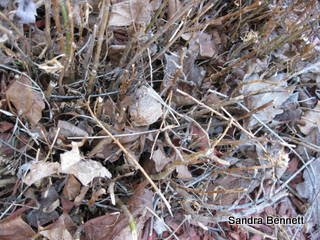 I found this praying mantis cocoon yesterday, when I was clearing out the flower bed. It was so beautiful and I’d spent a lot of the day writing a magazine article, with photos, and I, desperately, needed a break. Thirty minutes of physical labor soon restored my head to rights. 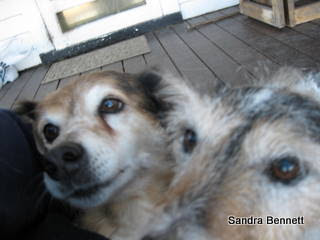 Grace, left, and Abigail, right, are showering me with LUV. Gracie is the one who always wants to snuggle up, kiss and tell me her thoughts while Abigail is the jealous one who wants to push Grace out of the way. They are both foundlings who have been with us almost twelve years but God alone knows their real ages. 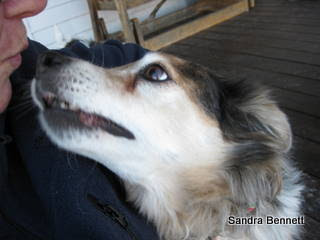 Gracie loves to tell me about her day and with those adoring brown eyes she always looks part human. 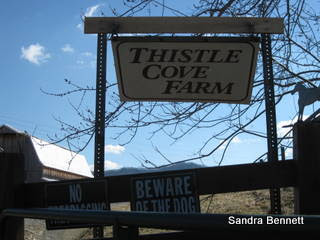 We’ve had extremely high winds as evidenced by our metal sign blowing to and fro. The weather report called for 60 to 75 mph and I think it must have been that bad during the 0 dark thirty hours. A goodly portion of our oak tree was broken off and this is the spring we’ll need to plant some new trees in the front yarn. Dave wants some white birch so I think I’ll plant seven in a little group in the corner of the yarn. That should look beautiful as time goes by. I want to plant another oak and perhaps another maple while fruit and nut trees will be planted in the garden. 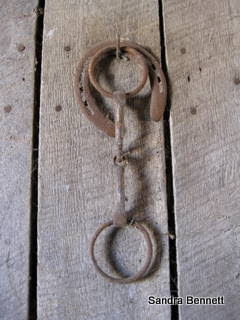 The stables are old, pre-War of Northern Aggression and have a lovely patina. Someone hung up this bit and horseshoe years ago and I’ve left them because I enjoy the way they look. 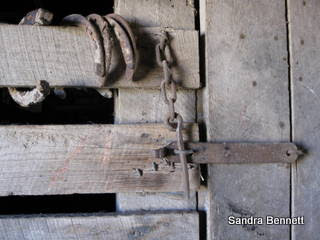 You can see in this photo where someone has leaned their left hand against the railing as they used their right hand to open the door. Signs are all around us if we stop, look and think but, unfortunately, most of us are too busy to take the time. Hard to understand, that, when time is all we’ve got anyway. 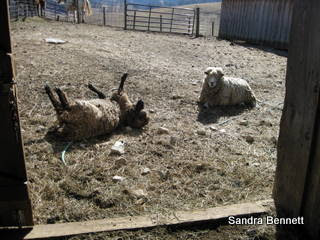 When I got to the barn, Thomas was cast…meaning he’d laid down but couldn’t get back up without help. He’s on a slight incline and was a bit off-balance and all he could do was wave his legs, helplessly, in the air. Zacheous, his steadfast friend, had settled near Thomas’ head so Thomas would know he wasn’t alone. It took me a while to get Thomas to his feet and hold him steady so he could regain his balance and barn legs. Other than being ancient, he’s none the worse for the wear and, eagerly, ate his cracked corn and hay. The water bucket is a bit low so I know they are drinking and that’s a good thing as well.

Proverbs 18:24 says, “…there is a friend that stickedth closer than a brother.” Zacheous couldn’t do much but he did what he could do. Shouldn’t this be the case with us? Even when it’s nigh impossible for us to do much of anything, we can lend an ear, say a prayer, make food, offer to clean house…there’s so much we can do other than say, “call me if you need anything.” Love is a verb, isn’t it? 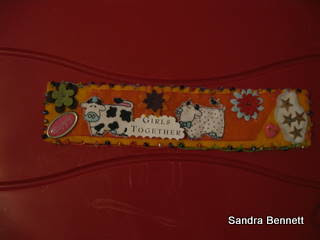 This is the bookmark I’m sending to Bethel in Australia; it’s one-third of my obligation to OWOH 2009 Event. The photo is a bit dark but is still a good representation.

A neighbor stopped by to tell me friend Anne has been placed in a nursing home; she’s my oldest friend in Tazewell and older than me by a year. She has Alzheimer’s and has reached the point where full time nursing care is required. It’s difficult watching someone you love slip into the twilight, knowing there’s nothing to be done to restore wholeness, nothing that will break through the dusk to tell her she’s still loved, nothing to save the years. In these last years, I’ve done what I could but now she’s been moved and we may never visit together again, the memories will have to suffice.

Ah well, so much we’ll never know this side of the veil.