FIXED AND UPDATED WITH PHOTOS AND LINKS….THANK YOU GOD!

I AM EXASPERATED! Blogger isn’t allowing me to post photos nor to post links. When I attempt to do either…it will only show the HTML code but NOT the photo nor highlight the name so the reader can click and be directed to the link. Does anyone know what’s going on???

BTW, on the page where one posts an entry…the top of the post has been, somehow, shortened. Instead of stretching across the top, it’s now only a seven blocks long. IOW, it begins with b for bold, i for italic…and continues to the symbol for add video. What happened to the rest of it??? I can’t even italicize the ‘Blessings’ at the end of my post…it just comes up as HTML code but not italicized!

PLEASE, are you able to help me???

Photos to come later…perhaps much, much later. Blogger is being naughty and I’m tired of being nice.

Ever had one of those days when you’re swamped, have a ton and a half of things to do yet find sitting at the computer way more satisfying or, at least, more fun? That’s today, Saturday, I’ve already been to the feed store and bought cracked corn for the old sheep, stopped at the grocery and bought food for the humans, came home and unloaded everything then thought about all the work I had yet to do. Then I hightailed it to the office to sit in front of the computer and play. Which is okay except I’ll wreck havoc on myself playing catchup later. Like someone once told Dave, “goofing off is no fun unless there’s something else you’re supposed to be doing.” If I wasn’t so close to finishing this entry…note…that’s been several hours ago now because for Some Unknown Reason this entry keeps getting rejected!…scowl, hiss, moan…I’ve taken a leave and am now back, trying again for the umptenth time…I’d go downstairs and make a pot of tea in my ‘new to me’ thrift store find teapot. I adore things that are beautiful and functional as well. I suppose too many years of hearing, “pretty is as pretty does” makes me think form without function is wasteful.

Check out Faith Folk blog where Pam Warden is having a fun giveaway. While you’re there, visit for a while and calm yourself; you’ll be glad you did!

Robin, at the Knittin’ Coop, talks about Mary Draper Ingles who lived in Draper, VA down around Wytheville. So, in the re-telling a portion of the story, I thought I’d show some arrowheads and other tools I found here in the Cove. The story goes there was an Indian village here and when the field is plowed, artifacts may be found. Some of these flint pieces who definite signs of being chipped, as in someone making tools.

Back to Mary…her story is, in a word, incredible. On a 1775 July Sunday morning, Mary, nine months pregnant, and four others were kidnapped from Draper’s Meadows by the Shawnee’s after a raid that left four dead. Three adults and one infant were killed presumably because the adults were too old and the infant too young to make the trip back to the Shawnee village. They would have made slow going for the rest of the war party. The raid was gruesome but, 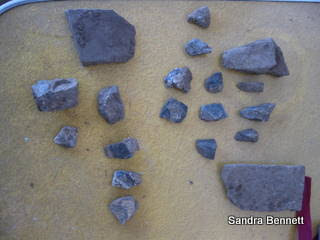 truth be told, probably no more so than what Anglo settlers had done to the native folks. In Tazewell County, when we first moved here, there was a Virginia Department of Highways sign posted that read “Indian Outrage” and detailed the Indian killing some of the Anglo settlers. Shortly thereafter, that sign was removed and a new sign now reads, “Settler and Indian Conflict” which is more truthful. Ah well, history was/is written by the winners and unless/until people protest, nothing gets changed.

From somewhere west of what is now Cincinnati, OH, it took Mary Draper Ingles 43 days to walk 800 miles home to Draper’s Meadows. When she arrived in late November, 1775 she was skeletal, naked, had white hair and was only 23 years old. Click on her name to see a map of her amazing walk and read more of her incredible story. Through her Mother’s Mother, Dave’s mother, Mary Crockett Bowen Bricker, was kin to Mary Draper Ingles so that makes the tale even more fascinating…to me at least. Through the same line, Dave is also kin to the Crockett’s of Dave Crockett fame. He and his brother made their way to southwest Virginia and the brother stayed while Davy continued west. 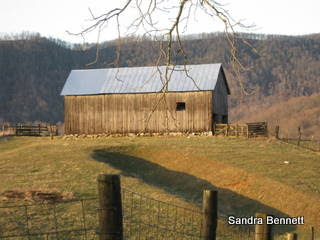 Just about two miles down the road, this barn is on the Bowen family homeplace and, with its limestone foundation and metal roof, looks as if it will stand the test of time.

Crock, as his mother was nicknamed, loved to tell family stories and, most of the time, I loved listening. I tried to get her to write them down or to record them but she wouldn’t and now those stories are, just about, lost. My family has such stories and I’m thinking I should take a tape recorder next time I’m with Daddy and Mother and tape our family stories. Daddy’s maternal line is Hamrick and there’s a bronze statue of Rimfire Hamrick standing at the West Virginia state capital. Rimfire is known as the typical Mountaineer, an example of the sturdy pioneers who built the New World. All the Hamricks are descendants of Patrick who came here from Ireland, landing in Fredericksburg, VA in 1654, and whose sons made their way to Appalachia. Rimfire claimed 4,000 relatives and when he ran as a Republican for House of Representatives in Webster County, WV, told potential voters, “You have me there in bronze, now send me there in person.” Rimfire died Easter Day, 1945 and my Daddy can remember him still.

I’m a pretty dab hand in the kitchen, can keep a fair garden and consider myself no slouch when it comes to survival. But, I don’t kid myself that I could do what our forefathers and -mothers did for survival. It seems each generation loses a bit of what it takes both physically and in knowledge. How many among us know how to hunt for ramps in the spring or ‘sang in the autumn? Why, there are millions who don’t even know what those things are and, sad to say, they probably don’t care. Come hard times though and people will go back to hunting for wild food including branch lettuce and morels. Come to think of it, some mountain people have never stopped wild food hunting and we eat well, mighty well. There’s almost nothing better than a branch lettuce sandwich with a little mayo. Too bad tomatoes aren’t in season.

Looky here what the Father gave me last week ~ 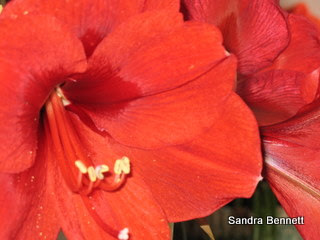