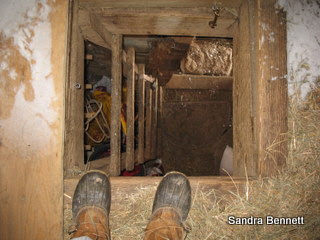 My square hay is kept in the barn loft which is accessible from three different doors, all of which are kept locked. When we first moved here nothing was locked up but times are hard and these are different days; now, everything is kept under lock and key. Here, I’m standing in the loft, staring down into the tack room where I keep cracked corn, sweet feed, cat food and other animal essentials. 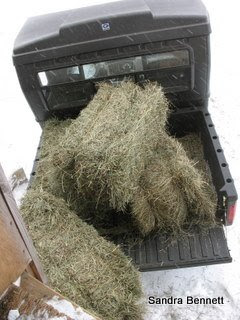 I’m standing in the loft door facing the front of the barn, where I back the Polaris Ranger into place so I can load hay. Today I loaded eight square bales…yeah, yeah, I can see they are truly rectangle but farmers call them square bales…which weigh between 65 and 75 pounds each. My neck and shoulder muscles are crying like babies and as soon as evening chores are over, I’m headed to a deep tub of HOT water. 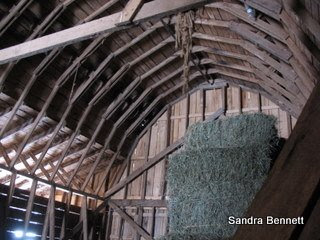 This is the hay loft; ain’t it just BEEYOUTIFUL!? I truly adore barns and think we’ve got one of the prettiest I’ve ever seen. It was built prior to the War of Northern Aggression, has a limestone foundation and is built with pegs and handmade nails. 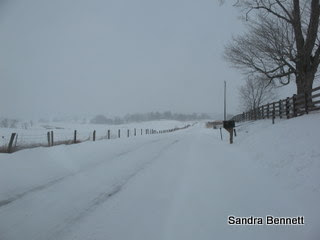 Our road, Cove Road, probably, won’t be cleared today as we’re a secondary road and only three families live here full time. There are a couple of other houses but they are empty. Cove Road is also a dead end road and the road into which Cove Road empties is called Maiden Springs Road which is incorrect as there’s only one spring but try telling that to the folks who named it. They named it incorrectly and, now, won’t change it because “it’s too much trouble”. It’s also Route 91, the only dirt primary road in the Commonwealth of VA. Strong men have been known to weep and saintly women to curse upon driving Rt. 91 across the mountain. There aren’t any guardrails and a fair number of S turns, U turns, switchbacks and sheer drops into mountain air. Generally, we have a tractor trailer, or three, try and go across the mountain…even though the signs say, “NO tractor trailers” because, “the map says it’s a primary road.” I don’t believe even one tractor trailer has made it around the first S curve; usually, they go over the side of the mountain and then tie up “traffic” all day. Hey! We call tractors traffic, don’t you? 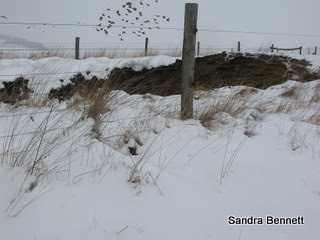 This is silage which is corn and corn stalks that have been cut in the summer heat, churned up into a “mash” and then piled into keeping areas. It ferments and, eventually, smells a bit like sour mash which I think smells good. A lot of non-farming types, including Dave, think it stinks. The birds won’t visit my bird feeder in the winter because they’d rather eat silage. They swoop around, alight on the fence, fly down into the silage…it’s fun watching them do their aerials. 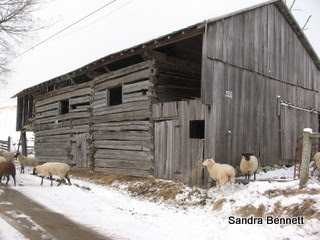 Abigail and I headed down Cove Road today because we wanted to enjoy the beautiful day and I wanted to take some photos. Our nearest Cove Road neighbor, about two miles down the road, has one of the largest sheep flocks in the Commonwealth. The sheep had worked a gate loose and were in the road, eating spilled silage. I love the old barn, what character! 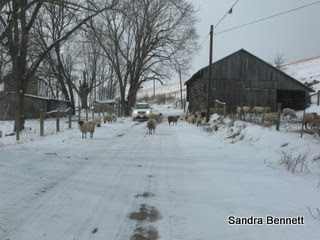 This constitutes a traffic jam. I waited until this car passed and then I parked my Polaris Ranger and managed to get the sheep back into their pasture. It’s just being a good neighbor and Clinton has done similar for me. He knows my flock is ancient and, sometimes, he’ll see a sheep that’s cast…meaning, the sheep is lying down and can’t get to its feet…and Clinton will climb my fence to right the sheep. I went to Clinton’s house and told him what I’d done. I also wanted to check on his Mama, she’s been ailing but is coming home today. I know she’ll be happy to sleep in her own bed tonight! 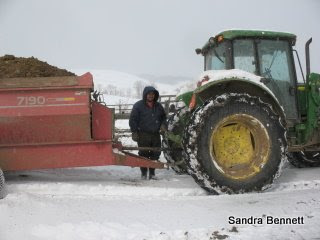 This is John and he’s feeding out silage to his cattle. He’s the brother to Dr. Anne, our vet, and such a good young man. He and his wife have a beautiful baby boy…he’s the little boy I made the John Deere tractor quilt for…and I love catching up with the news in their lives. John’s wife, Miss A., works for Dr. Anne so we’re accustomed to telling one family member something to pass along to another family member. We all live in a very small valley so it pays to establish good ties with each other; we all depend upon each other, one way or another. 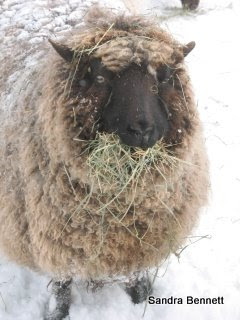 This is Trouble, doing what she does best…eating. She’ll stand and chew hay, apparently delighted with herself, thinking she’s doing something wonderful. My sheep tickle me. 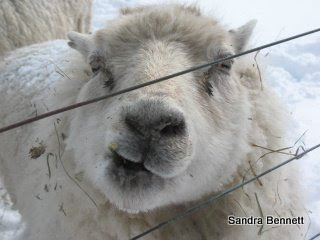 And, Carly, pretending she’s a camel. Carly is one of the matriarchs of the flock and loves to come when I call her. She knows there’s generally a small treat of cracked or whole corn, a cookie or some other goodie. 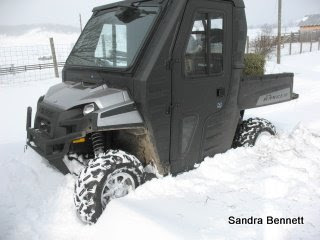 My Polaris Ranger, aka my Man Magnet. This is The Most Fabulous Utility Terrain Vehicle EVER! It starts, it goes, it has four wheel drive, independent suspension on every tire, a load leveling capability, will go far faster than I’ll ever need to, will carry +1,000 pounds, will pull about the same and looks like a Moon Buggy. Every time I drive this thing, meaning every day, some guy will stop me and talk about what a great vehicle it is. I told John this morning, “this Ranger is my Man Magnet. You know how guys drive cars that are chick magnets? Well, this Polaris Ranger is a Man Magnet.” I think he was as amused hearing about it as I was in the telling.

Hey Polaris — THANKS for making the Ranger; it makes my farming life a whole lot easier! 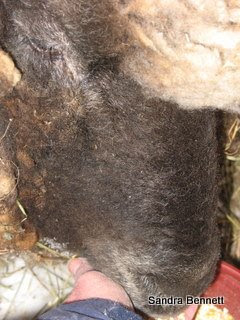 Buster Brown getting his morning feed of cracked corn. He wouldn’t drink any warm water this morning and I think he’s getting closer to saying good-bye. He’s had a great life, has been petted and loved on more than a lot of people…sad commentary on how we humans treat each other…but I think he’ll be ready to cross over and be with our other beloved animals. Look at that Roman nose, how very Romney! 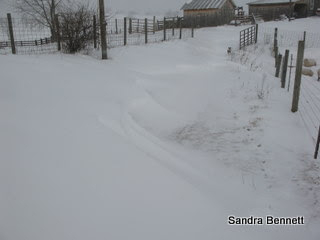 The driveway had drifts of three feet, perhaps more. It was an interesting morning, walking down to the barn. 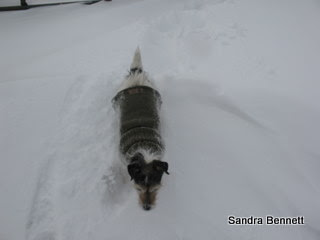 The snowstorm is a humdigger…about ten inches on the ground and more coming down, hard and fast. Thank God we didn’t have the wind chill we were expecting…weather folks were calling for somewhere around fifteen below zero F and that’s enough to suck the life right out of my lungs!

It took a while to do chores this morning because the snow drifts are anywhere from two to three feet deep. Abigail looked like a deer as she was pronging from drift to drift. I made her wear her Army green sweater, which she hates, but it keeps her warm. She’s at an age…aren’t we all?…that she needs to retain as much body heat as possible, stay as warm as possible but still have a good time doing it. She acts like she think she looks goofy and doesn’t seem to care that I look even goofier in my Goofy hat, sweatpants and five layers of clothing. I’m warm and don’t really care what I look like and neither do the animals…they just care the hay is coming at a fast and furious pace.

I adore tending to my animals, taking care of this farm. It’s a blessing to have the strength to do the work God has set before me and I’m so very grateful.