It’s another cold day, didn’t get above 26 degrees F and it’s been snowing, off and on, all day. We had one to two inches last night, supposed to get another one to two tonight; I’ve not left the farm all day and only left the house to do chores.

Chores are, sometimes, very exciting around here. To get bales of hay from the barn to the pastures, I drive a “sexy little golf cart, Missy” as the farrier likes to say. He’s bald as a cue ball, has a droopy handlebar mustache and is built like the, proverbial, brick outhouse. He’s also married to a woman about fifteen years older than he; he’s got a lot to recommend him. Yes, I do like the days when the farrier comes to trim horse feet. ‘smile’ 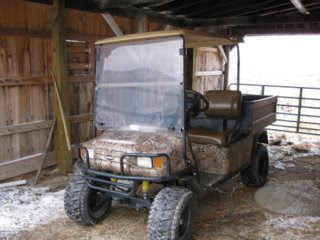 So, the “sexy little golf cart, Missy” is a Workhorse and it runs. I don’t care what the heavens throw down, I don’t care what the temperatures are, I don’t care how cold it is…that Workhorse flat out, simply starts and runs. It’s the most amazing little machine I’ve ever seen and I only hope my Polaris Ranger will be as good or better. Lord knows that good for nothing Bush Hog UTV was as useful as teats on a boar hog and it’s good riddance to bad rubbish.

Oh don’t get me wrong. The Bush Hog was a great little machine and for the money couldn’t be beat. Except it wouldn’t start in cold weather and if, by chance, I got it running, it wouldn’t stay running. It would gasp, choke, cough, whine and, shortly, die. I should have shot the blasted thing the last time it wouldn’t start. It preferred to stay inside and keep its pretty little tires warm and clean when the weather was cold. The regional sales rep, and I use the term only because that’s what his title is…trust me, it’s a slap in the face to regional sales reps who actually DO their job and are polite to their customers…so the regional sales rep says to me, “it’s that Honda engine that’s bad. You need to get in touch with Honda and talk to them; it’s not a Bush Hog problem and I’m not dealing with you.” I told him, “I didn’t buy it from Honda, I bought it from Bush Hog, therefore, it’s a Bush Hog problem because it’s still under warranty.”

He says, “I’ve already told you, it’s a Honda problem and don’t bother us with it.” I’m thinking, with all the layoffs and people wanting/needing/begging for work, the only thing I can figure is this guy must be the owner’s nephew. Because. There is No Way a jerk like that should talk to a customer, IOW, the person who buys the equipment he’s selling so he can eat and pay his bills. His attitude needs some Serious Overhauling and I figure a few months in a bread line is just what he needs. Sheesh. I feel sorry for his family, if he has one. With an attitude like that, he probably started life in a petri dish.

So all this is taking place the month of November which was already a bad month because Dave’s mother went into hospital on the third and died on the nineteenth. Who wants to listen to a lot of mouth during good times much less bad times? I mean, this guy was really and truly shirty.

So, lest you think I’m railing over something that just happened, let me assure you…this problem has been going on for Almost One Year. Yeah. We ordered the Bush Hog last December, the week before Christmas, was told arrival “by the end of the year” and it came, finally, in late February. Very Late February, the 27th to be exact. It was a piece of junk and a lemon from the start. The second day it was here, it wouldn’t start. The local dealer has been a Southern Gentleman right from the beginning and has bent over backwards, and then some, to make this boondoggle right. I’ll not go into it again but if you want to read the sordid tale, check out Bush Hog, Reliable Unreliable, Part I, Part II and Part III. It all reads like a horror movie only worse because it’s been a real nightmare.

After Dave and I spoke, and I use the term very loosly, to the regional sales rep, we called his boss who was Simply Aghast, Horrified and Promised to Make Everything Right and asked me what did I want Bush Hog to do. I said, “within five business days, have a brand new, totally outfitted GREEN Bush Hog UTV just like this red one, sitting in my driveway.” I wanted a green one because I didn’t want them to try and pull a fast one on me. He said, “great, I’ll call you back this afternoon.” Well. I would just love to see Bush Hog’s calendar because “this afternoon” has Never, Ever Come… Not The First Time.

So, after Dave has called Bush Hog and been Very Polite…btw, I’m proud of Dave because when a man has been lied to That Many Times, it is Very Difficult to be polite. I called Bush Hog and requested the President’s name and address. The woman who answered the phone remember my voice…from weeks ago!…and, very politely, said, “may I ask what this is about.” I told her I was getting ready to write a lot of letters to a lot of people and organizations and wanted to copy the President. She said, “would you like to speak with him first?”

My mouth dropped open and I mumbled, “well, sure. That would be nice.” In a few moments I’m speaking with the President of Bush Hog…the new President of Bush Hog because according to i-net research their personnel is turning over like a rolling stone. I tell him my story and, I’m almost, but not quite, ashamed to say…I cried. You’ve got to realize, this has been going on almost a YEAR and for a lot of that year, I’m cold, wet, freezing, miserable and exhausted from toting sixty-five to seventy-five bales of hay to the pastures in weather that would freeze one’s knickers to their bum should a leakage problem occur.

One thing leads to another and he says, “let me check into this and I’ll call you back this afternoon.”

Uh oh. My heart sinks to my boots. Where have I heard this before? And from how many people at Bush Hog. Lawzee, I can hardly begin to count the times and folks.

To hasten to the end of this tale…Bush Hog President causes my money to be refunded and the regional sales guy causes the piece of krap Bush Hog to go to another dealer, not back to the plant as promised. But hey, that’s no longer my problem. Am I happy with Bush Hog? Nope. Am I happy they refunded my money? Yep. It only took them almost a year to make things right with a customer, thanks Bush Hog President. Out of all the males we dealt with at Bush Hog, you’re the only one who Kept Their World and that reflects well on you as a Southern Gentleman. My compliments to your Mama; she done good by you.

Blessings ~ Bush Hog Refunded Our Money…hurrah! ~ the Workhorse…hurrah! ~ warm clothes ~ hay ~ a good husband who takes care of his own ~