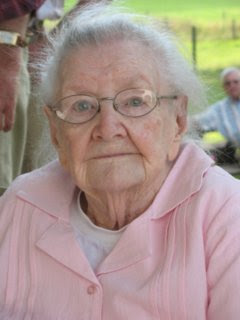 Mrs. Bricker was known to her contemporaries and family as Mary Crock or, more simply, Crock. To her grandchildren and great grandchildren she was known as Brick Brick, her son and daughter called her Mother and she was my mother in law.

In her day, she did a bit of crocheting but was better known for her ability to teach hard science and math at the high school, college and university levels. During the war years, Mrs. B., along with her sister in law and her daughter’s future mother in law comprised the entire math department at Beaver High School in Bluefield, WV.

She was extremely proud to have been chosen one of the very first cheerleaders at Tazewell High School, Tazewell, VA and would tell tales of those early days to all who would listen.

Mrs. B. supported the efforts of Fiber Femmes and, in past years, paid postage to have fifty or sixty boxes of yarn sent to The Children’s Home in Siberia, Russia.

She was the last of her immediate family and on 19 November 2008 joined her parents, brothers and sister in death. In June 2008 we celebrated her 95th birthday and all but seven of the fifty or so guests were family members including children, grand and great grands, niece, nephew, cousins and me. 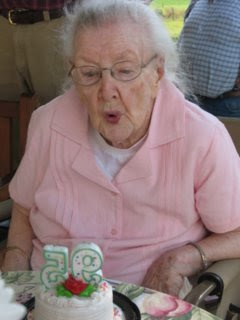 It was one of those rare, beautiful days…absolutely perfect weather and enough of the “old guard” in attendance to warrant a magical knowledge this was the passing of the torch. We all knew we’d never have this opportunity again and took full advantage of the day to build love and memories. We who were there have that day to hold against the dark nights and frosty world that push against love.