We had a lovely Saturday, full of family, deep roots, good food and great fellowship. Dave’s Mother is a Bowen by birth and of the Rees Tate Bowen line. Her Grandmother was a Gillespie and married her first cousin, a Bowen, so bears the blood of both old families. The Bowen’s came out of Wales where, curiously enough, my paternal Grandfather Bennetts’ people originated. As I’m typing this, the thought occurs to me…wonder if Dave’s family and my family were on the same boat that left Wales and landed in Fredericksburg, VA in 1654? I’ll have to put that on my to-do list for checking.

The ceremony specifically honored the Bowen and Gillespie Patriots who fought for freedom from the tyranny of King George. There were around 100 people, perhaps more, attending the ceremony and came from all over the USA. Heather, from the United Kingdom, was visiting my mother-in-law’s cousins’ widow, a Bowen, and found it all as interesting, I dare say, as did I if from a vastly difference perspective. We’re but a blip in England’s long history and upstarts to boot. It takes persons of enormous courage, fortitude and who have little to lose but much to gain to do what those first settler’s accomplished.

I’m sure there were murders and killings on all sides…settler’s and those who were living here when the settler’s arrived, just as I’m sure there were friends and inter-marrying among the white’s, blacks and American Natives. It’s been said history was, and is, written by the winner’s but, even so, there’s enough truth left so one can ferret out a story. 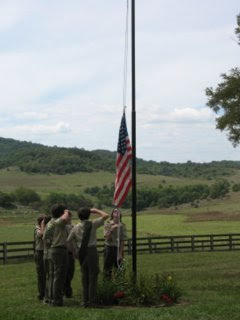 The Boy Scouts lead the ceremony with the raising of the US flag while we all said the Pledge of Allegiance.

This post is about honoring our past by living our future in the here and now. It’s about watching the Boy Scouts raise and salute the American flag while the rest of us say the Pledge of Allegiance. It’s about honoring those men, and women, who left the old country to forge a new one while claiming their place in history. 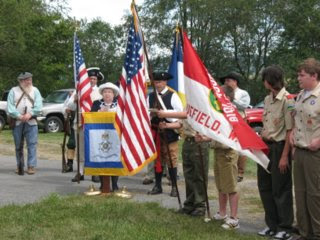 Mrs. Peggy Marrs leads the group…but for the life of me, I simply cannot remember the correct title of what we were saying. I won’t try and muddle through; I’ll try and find the program I gave my mother-in-law knowing full well it would, in all probability, vanish into thin air. Peggy is a member of the Maiden Springs DAR, a group I’ve been invited to join once I complete my gathering of Hamrick information for the application. 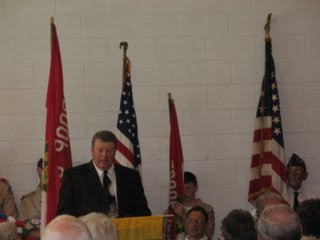 Rees Tate Bowen, VII, speaking as the first Rees Tate Bowen, tells the story of coming to this new country, living first in, what is now, Rockbridge and Augusta counties, then traveling to where the homeplace now stands in the Cove, Tazewell County, VA. 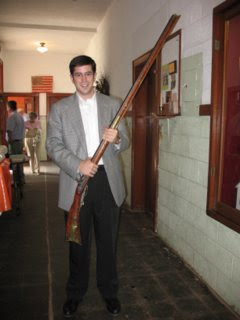 This young man is holding the rifle that fired the first shot at the October 7, 1780 Battle of King’s Mountain. He hurried away before giving his name but is certainly one of the Bowen, or perhaps, Gillespie line.

I love my country and am unashamed to shed a tear when the flag goes up or by, hand clasped over my heart, whispering the Pledge, singing the anthem or giving thanks for those who have gone before. I fear for America as much as I love America. While it’s true we’re a great melting pot, it’s also true we’re becoming diluted. We’re becoming less America and more a fraction of a whole; the whole is becoming less and I believe that’s not a good thing. We’re losing our identity as “Americans” and taking on the nomenclature of Anglo Americans, Irish Americans, African Americans, etc.

Doug Wilder, former and first black Governor of VA and now Mayor of Richmond once said, “I’m not an African-American. I AM AN AMERICAN!” I agree. I am an American and while honoring my Welsh, Irish, English, German and American Native heritage, I remain, first and foremost…AN AMERICAN.

There’s a statue at the Charleston, WV state capitol building of Rimfire Hamrick. He stands there as an example of the men, and I believe women, who founded not only West VA but this country. Men who walked the walk more than talking the talk; men of action, pioneers and strangers in a strange land. Men who left their mark on history by going to war to defend this new land, to protect home and family and, by leaving their mark on history, marked the hearts of kith and kin to follow. Rimfire is a distant relative on my Daddy’s Mothers’ side; she was a Hamrick who married a Bennett and representative of the type of woman that help define the frontier by keeping the hearth flames burning.

It’s a proud heritage and culture, that of Appalachia and America. Where we, the Hamrick’s, Bennett’s, Bowen’s and Gillespie’s ended up is very similar to where we started. The mountains are soft yet rugged, the people are rugged yet soft and we tend to take care of our own.