“All the best part of experience consists in discovering that perfectly trite pieces of observation are shiningly and exhilaratingly true.” C. E. Montague

Only a short few weeks ago, a month yesterday, summer officially announced herself. We had a coolish, rainy spring that brought a great crop of hay to tide us over the winter. Off and on, for weeks on end, it rained…sometimes gentle, sometimes torrents but always welcome. After the drought we had last year, rain, and hay, are most welcome.

Yesterday, summer reminded me she was dieing; the end has already begun almost before it arrived. Certainly before I’m ready. Isn’t that always the case? Why does it seem summer is always so much shorter than winter? I like all the seasons, appreciate them all, use them all, enjoy them all but summer seems to be God in all His glory at His very best.

At 5:00 p.m. the thermometer read 102 in the shade; God only knows if that was the hottest part of the day. It was a hot, humid day and moving through it reminiscent of moving through the shimmering haze of a July day at the beach. It was difficult to get much done although I kept moving all day. I worked in the studio making some cards, de-cluttering, putting up shelves and getting some quilting projects ready for Thursday night. I did several loads of laundry and hung everything on the line where it dries quickly and smells fresh no matter if sheets or blouses or towels.

Dave’s Mom gets a shower on Mondays so that was on the mid-day agenda and went well. She’s afraid of falling…who isn’t as they age?…so I spend a lot of time prepping the shower with extra towels on the bench and handhold so she can feel as secure as possible. People have asked us why don’t we put her into a nursing home and that’s a good question. The answer is I don’t believe in them. I believe in taking care of family, friends too if it comes to that, and as trying as it is having the responsibility of someone 24/7/365, it’s what family does. Other people make other decisions based upon their circumstances but this is what we’ve decided. For the most part, it works. Every major religion says something like, “what goes around, comes around” or “karma” or, as the Bible says, “cast your bread upon the waters and it will return.” The Bible doesn’t say good bread or moldy bread, it just says bread, so Dave and I are casting our bread upon the water and honoring our parents. For us, life is as it should be.

At 3:00 this morning, the fog was dense and the air cool reminding me in order for autumn to live, summer must die. There’s always “that moment” when summer wavers, just a tiny bit, and the mask slips, reminding us of the fragility of time, the brevity of not only nature but of life. The sumac is always the first to turn autumn colors and lose leaves while the next is either the walnut or locust trees. 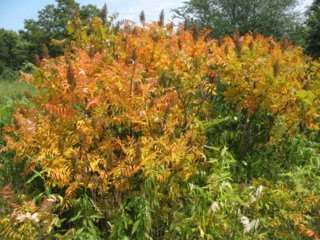 Dave and I were leaving the Cove and saw this beautiful deer cross the road. 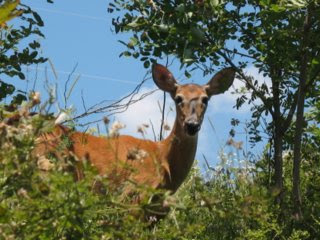 It always amazes me how well a deer blends into the foliage. All too soon, it will be hunting season and while I recognize the need for thinning deer population, it saddens me at the same time. We know many hunters who hunt for food on the table but others, imho, shouldn’t be allowed to hold a gun in their hands much less shoot it. I’ve seen ejits drinking alcohol, shoot from the road, spotlight and other infractions that should, at the very least, garner them a public whipping. And no, they aren’t all “good ole boys”, some are “professionals” or so they call themselves. Oh well. Enuf said or I’ll go on a worse tangent.

I’ve been quilting then shipping them far and wide. The little “Olivia Pig Quilt” was made for a friend’s granddaughter and everyone loved the bold simplicity of the black, white and red quilt. Friend Marti asked if I knew those simple, yet striking, colors were conducive to a child’s early development. I wish I could take credit but true be told, I just like the “pig in lipstick” and it amused me; I’m no even sure I knew of Olivia beforehand. 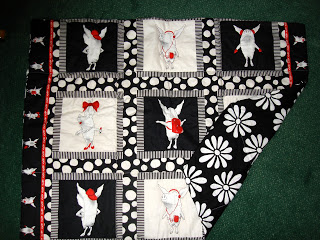 I’ve several more quilts cut out and ready to sew this Thursday evening. One is a 50th Anniversary wall hanging for my Mom and Dad and has 12×12 squares of muslin with the written well wishes of friends and family. I’ll print their “courting picture” on a piece of fabric and will use as the centerpiece with the muslin squares as borders. I’ve got a quilt cut out for Dave’s cousin and his wife; that’s an anniversary gift whenever I get it to them. I need to finish the John Deere quilt for Little John, as opposed to his Dad, Big John, who live down the road. There are other quilts cut out and ready to be sewn, some are for the bed while others are art quilts. I’ve never made an art quilt but there’s got to be a beginning so there can be an end. Just like the seasons. Just like us. There’s a time for everything including a time to be born and a time to die. As with all, tempus fugit but most importantly…carpe diem. It’s a beautiful day, don’t let it get away from you. 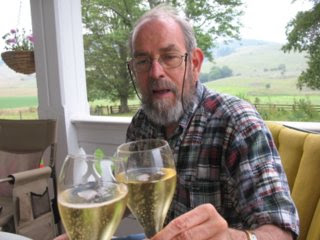 Happy 13th Anniversary to Dave and I…may our future years be from the best of our past years.