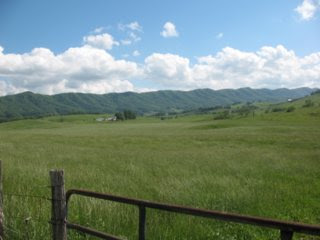 In order to get anywhere we have to leave our valley, affectionately and simply called “The Cove” but, officially called “Ward’s Cove”. The Ward family settled here generations ago, back in the 1700’s closely followed by the Bowen’s, Dave’s mothers’ family. They got here in the mid-1700’s and staked their claim via a land grant…or so the story goes.

Anyway, the photo above is what we rest our eyes upon when we return from a shopping expedition. That’s Thistle Cove Farm in the far distance, the smallest farm in the valley at a little fewer than thirty acres. The next largest farm is a few thousand acres and we’re all bordered, on the backside, by a national forest. It’s a lovely place to live and I never, never tire of gazing upon God’s beauty. 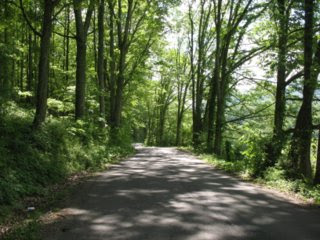 This is one of the ways we can drive home; I love the canopy of trees and the filtered sunlight speckling the roads reminding me of a speckled hen. We often see deer on this road and, sometimes, a sow or her cub. We have bald eagles nesting in our valley, contrary to what the Game and Inland Fisheries Department says. They say no bald eagles nest here but they are wrong and wrong is, quite often, what one is when one relies upon books instead of first hand observation.

Daddy and Robert were gathering honey a few days ago. It was So Hot the bees were gathered on the outside of the hive, using their wings to cool down the inside of the hive. This time of year poplar honey is what the bees are making and it’s a rich, dark, sensuous honey that lingers on the tongue. Next month bees will be making linden, aka basswood, honey, an almost clear honey that’s as delicate in flavor as a bride’s wedding veil. 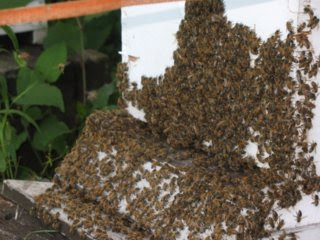 A lot of bee keepers will use gloves, hat and suit to collect the honey but if a person is calm, quiet and gentle around the bees they will, generally, not sting. A honey bee only has one sting and once that sting has been used, the bee dies. How unlike a wasp or bumblebee…those can sting over and over and over and…UGH!
Anyway, I’ve grown up around honey bees and their hives and have never been stung while collecting honey. I’ve never known Daddy nor Robert to wear “protective gear” and they only times they have been stung is when they’ve done something stupid. Robert put his arm down on the hive and crushed a bee between his arm and the hive; ergo, the bee stung him. It was a clear case of self defense. Steve, my brother, has been keeping bees for decades and is allergic but has never been stung by a willful bee. Bees are gentle creatures, even when someone is robbing their hive of their hard gained honey. A bee will travel more than five miles to collect nectar to bring back to the hive for the worker bees to turn into honey. 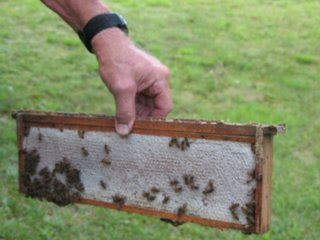 This is honey in the comb and once the bees are “smoked” off the honey can be cut out and slathered on home made biscuits…YUMALICIOUS! Oh and if there’s home churned butter as well…then you have a little preview of heaven!
Bee keepers use a smoker, into which they place a little paper and a bit of burlap bag. This makes the bee lethargic and calmer, in turn, they fly back to the hive and give up their claims on the honey in hand. It’s a humane way to manage bees and bee keepers have done so for generations. 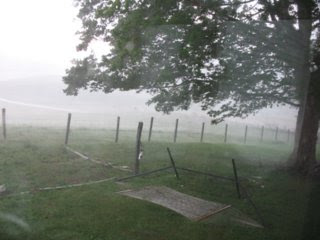 We had a storm yesterday and today and the rain is most welcome even though it’s hay cutting season. We need to have our hay cut and had contracted with a neighbor to cut today. Fortunately, the rain came before he could cut so, hopefully, the next few days will be sunny and warm. We’re keeping all our hay this year; in year’s past we’ve contracted on halves with other horse owners. Last year’s drought meant we had to buy hay out of North Dakota…expensive!…so we’re keeping our hay this year. We should, please God, have enough to feed our horses and, perhaps sell a bit as well.
Back to the storm…the winds were horrific and blew over the hammock stand. That stand is heavy, made of steel and the wind blew it over like it weighed nothing.
In the photo below you can see the bird feeder swaying to the left as the wind blows. Even now, hours later, water is pouring from the skies and the thirsty earth is drinking her fill. 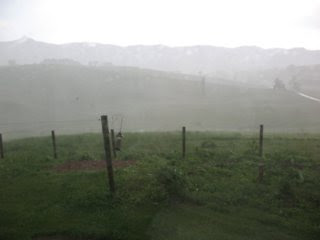