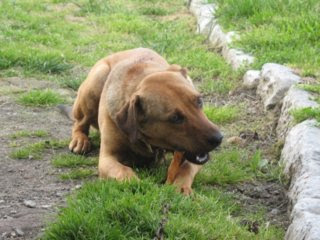 We have a new family member; her name is Phoebe and she’s about eight months old. A number of years ago, Dave made me promise I wouldn’t pick up any strays on the road. Which is pretty difficult to promise and almost imposible not to do. I wish people could be horsewhipped in public for dropping animals on the road and I absolutely *hate* cleaning someone else’s mess. I’ve heard it all…I’m giving the animal a second chance. Maybe someone else will give it a home. The animal shelter is too depressing.

Yeah. Right. What it amounts to, people, is you’re too sorry to do the right thing by the animal. Take it to the shelter where, yes, it might be killed, put down, destroyed or even, GASP! adopted. But At The Very Least it will die a decent death. It won’t be torn to pieces by a pack of wild dogs or coyotes. It won’t die, slowly, twisting in agony because it ingested poison. It won’t die, slowly, painfully because it was hit by a car and unable to find a morsel of food. It won’t die, slowly, in anguish because it got caught in a snare and died, in a few days or weeks, of thirst or starvation.

The people who need to read the above are out dropping off dogs; not reading my blog so the rest of you, please forgive the rant.

Phoebe. What a beautiful little girl. She looks a lot like Shaddie, our Ridgeback, but, I don’t think, is going to be quite as big. That’s a good thing as Shaddie weighs around 110 pounds. Some evil person, perhaps the same one who flung her out on the road, also mistreated her. It took a week of twice daily feedings to gentle her even though her personality said, “I want to be loved, I’m a good dog and want to trust you.”

Even when we brought her home, Sunday night, she was cowed and shying away. It took a lot of gentle, slow moving around her; lots of treats, hugs and kisses to bring her around. There’s been a small altercation between Poebe and Abigail but that was over a dog bone. Abbie has always been, and will always be, top dog around here and, while she shares, she, sometimes, does so grudingly. Anyway, Abbie snuck around and stole Phoebe’s bone and the next thing I knew, the fight was on. Teeth were bared, snarles exchanged but no one used their teeth to bite. Thank God. It was a show of strength and wills and I’m keeping a close eye on both until Phoebe has settled in. That should take a month or so for me to think things are working out.

Yes, I did get out of my sick bed to go with Dave across the mountain. He decided we were going to bring this girl home and wanted me to help. How could I possibly say “no”?

See how much Phoebe resembles Shaddie? 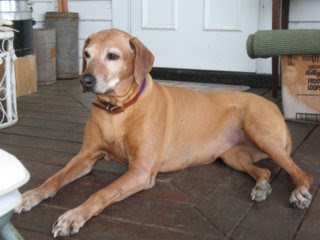 ~ Gracie, foreground; Hattie Cat, background; 91 on lower portion of grill and Boscoe Man on grill lid. This is the grill I use for dyeing my wool and is used as a cat perch the rest of the time. By the way, 91 received her name when I found her, twelve years ago, sitting by the side of Rt. 91. She was a tiny, tiny kitten and was snatched out of a, potentially, deadly situation to come to Thistle Cove Farm. 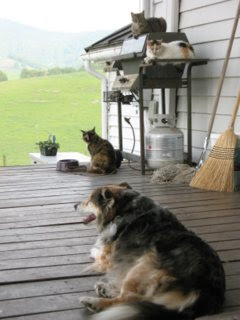 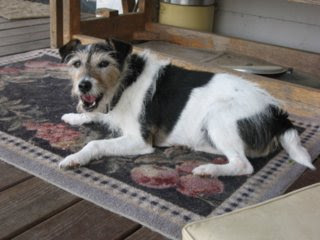