Fortunately, I’ve been paired on the up and down side with people who seem to have no problem with animal fiber. After all, if not for my vocation and avocation of shepherd and farmer, my small hand spinner’s flock would not live better than 70% of the world’s population! But they do…live better than 70% of the world’s population and I rejoice in that fact. My animals live a life of ease and freedom from the stresses of sheep coming and going. No one ends up on the dinner plate, no one is shipped to market. The only thing my dear little boys and ewes have to do is grow delicious fleece and let me love on them. Everyone’s life should be so good!

Someone in California sent me a skein of Debbie Bliss 80% cotton 20% silk aran in royal blue. It’s lovely but judge for yourself… 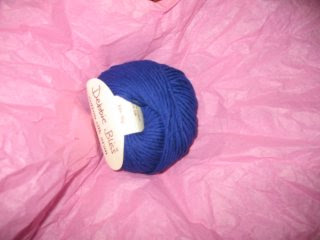 We’ve been busy at Thistle Cove Farm, working on the house, my studio and landscaping. My studio has been emptied so the floor can be painted, our bedroom paint job is completed and the wildflower patch at the kitchen porch back door is almost finished. I’ll have to show you photos later, we’re in a burning rush to ready ourselves for a drive across the mountain to the Town House Grill. It’s a delightful restaurant where the chef takes extra care to not only prepare delicious food but to present it beautifully as well.

I’ll leave you with a photo of a deer that was wandering around near Anne’s house last week. I caught a glimpse of the deer through the hedge 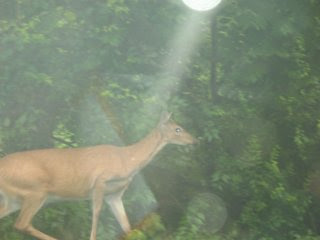 so knew to get out the camera. Still, I almost managed to mess up the shot because my settings has been switched whilst in my purse.

Be cool, it’s a hot August.