Quite a few people have been enthralled about one of my patterns submitted to the 2007 Knitting Pattern a Day Calendar. It’s the Februrary 1 submission, Samuel’s Heart Red Scarf and submitted in honor of women’s fight against heart disease. More women are felled by heart diseast in the USA than any other disease yet it doesn’t receive as much attention as other diseases.

Samuel is Carly’s son by Zacheous; Sophie is Carly’s sister. As you might well imagine, all of those sheep are tame, extremely tame. They pass along family traits so even visitors to the farm are able to pick out the family resemblence. I don’t mean their looks. I mean the way they react when they hear me calling or see me carrying a bucket of corn.
All I have to do is rattle some corn in a bucket and all the sheep come running…some more quickly than others. The older wethers will walk more sedately and I’ve learned to save back a few kernals for them. The younger ewes and wethers will run at a trot so sure they are they might miss a treat should they tarry.
Sophie, Carly and Samuel are some of the first to arrive. Polly and Sally, Merino twin ewes, are pushing for first place as well. It takes a stout heart to stand up to several hundred pounds of “hungry” sheep running at you full tilt boogy. Most of the sheep are about knee high and I’m always careful to protect my knees, bending them a bit so they can take a blow with greater ease and, hopefully, lack of injury.
The other family resemblence is the way they “ask” for corn. If the bucket isn’t directly in front of their noses or, if the bucket was in front of their noses and then moved to another nose, each of them will paw my leg. They will continue pawing, with those sharp little hooves, until the bucket has returned to it’s “rightful” position…just under their nose. It’s amusing but it also hurts like the dickens and I’ve plenty of bruses to show for their impatience.
When possible, I use my animals to model my finished patterns. They don’t mind and it adds a very real element that even a human model doesn’t bring to the picture. I ask you…what better model for a wool scarf than the animal that produced the wool?
So, here’s a photo of Samuel wearing “his” Heart Red Scarf. Please admire but don’t borrow as my photos are copyrighted. 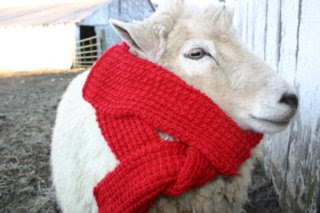 We’re in the midst of a blizzard, everything is white, animals have gone to ground and we’re all snuggled in for the night. My plans for tomorrow include baking some chess pies, shortbread, bird seed cheese bread, making some bean, garlic, kielbasa soup, wrapping some packages for mailing, taking some photos of the animals in the latest snowstorm, laundry, and getting the house ready for overnight guests. I’ll manage to squeeze in barn chores twice during the day as well.
Someone once said, “write your plans in pencil and then give God the eraser”.
If you want to make God laugh…tell Him your plans.
Share
Pin
Email
« Farm life…and death
Cold »