Brrrrr….at 4:30 a.m. the F temperature was 4 above zero; at 7:00 a.m. it was 7 above zero and at 11 a.m. it was 14 above. I’m not sure it got above freezing today, sure didn’t feel like it. The wind wasn’t so bad, only 10 to 15 mph but wind of any speed chills to the bone and sucks out what little warmth a body might have or hope to have.
Last night, the bedroom was frigid even with the small heater on medium and the mattress pad on high and the ceiling fan swirling. A two dog night if you know what that means. There’s a clock thermometer combo in the bedroom and it read a little above 50 degrees. Again, not so bad except for the wind and the wind was howling last night. Wind chills were well below zero and the curtains were kept flitting most of the night.
The Workhorse battery died and we went to the farm equipment store to purchase a new one. We did call first, they assured us they had the battery in stock and charged, ready for installation. So…I hurried through chores (so cold, so very, very cold) and we headed to Lebanon only to find out, nope, wrong battery after all. So the owner’s son calls around and after we decided to not jury rig the battery in stock, he finds a battery that could be delivered to the store tomorrow. I really dislike jury rigging anything, but especially a piece of equipment that, should something go wrong, will leave me with no options other than to discard it and start over. That’s money, time, energy and effort wasted and for naught when the job could just as easily have been done correctly the first time.
There we stand. The right battery is due to be delivered some time tomorrow and by tomorrow night the Workhorse should be up and running again. I use the Workhorse on a daily basis, sometimes more than once a day, to carry and deliver hay to the horses and sheep, to check hay supplies in the pastures, to run fence lines, pick up trash, etc.
When we got home late this afternoon, I had to move horses from one pasture to another, lock them in, get out the tractor and move a round bale of hay. Round hay had to be put out for the mares and gelding and that meant riding on an open tractor, being in the freezing, below freezing really, cold, wind and snow and being frightfully careful because it’s so icy and slick. I put the dogs in the farm truck to keep them from under wheel, turned the engine on to keep the battery charged and off I went. That particular chore took almost two hours of outside work.
The mares and gelding are now in the alfalfa field, side pasture where I placed the round bale of hay and they have access to the back pasture. They have plenty to eat but I’m concerned about their getting enough water. When it’s so cold, the water freezes where there’s no de-icer and it’s harder to drink icy water than warmer water. By warmer water, I mean water that’s not frozen. So…tomorrow I’ll switch the stallion out to another pasture, turn the mares loose so they can get to the “warmer” water…it’s a never ending battle of “switch the horses”. Hopefully, some folks are sending a check for one of the stallions and, in a month or so, he’ll move to his new home. That means no more playing “switch the horses”. Right now I’ve two stallions and they must be kept apart or they fight; not good at all. 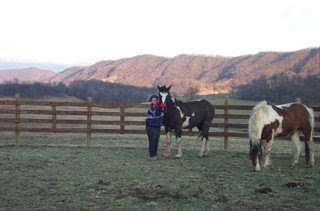 I’m hugging on HayJ, the American Curly x Percheron stallion and Danny Boy, his sire, is to our right. Everything was fine in “Eden” until, two years ago, mares were delivered to Danny for breeding. Gosh, did that ever change life on the farm forever! HayJ was an unproven three year old and by the time the mares left, he’d figured out why he had the equipment. He and his father fought then, fight now and all I can see in their future is a lifetime of fighting. Which, as you might imagine, makes it a trifle dangerous for anyone caught in the middle. As I can attest as I’ve been caught in the middle twice now. Fortunately, these are Curly horses and they listen well.
Once in the afternoon when son and father were fighting across a fence, all I had at hand was the shirt on my back…literally. So, I whipped off that shirt and started waving it between them to break their concentration. After a hard fought few minutes, they decided to stop fighting and I was able to lead Danny back to his pasture. I had left a gate open because I, stupidly, thought Danny would stay in his pasture if he had his nose tucked into some hay. And so he would have, if he hadn’t smelled some mares in season and then he was off!

The second time they fought, HayJ managed to pushed down a fence and a gate and make his escape. That morning, at 1 a.m. I’m standing in the road with shawl in hand, nightgown and slippers on my body, and telling HayJ, “go back to the barn NOW you black beast! NOW, I SAY, NOW!” Thank You, God…HayJ listened. I’m not sure how cold it was that morning but would venture a guess of around 40 F above. Cold enough to get my attention but not cold enough to do serious harm.

So…anytime anyone asks what it is I do on the farm I’m, frankly, at a loss for words. How do I tell someone of the adventures, the perils, the misadventures? How do I explain to someone this life is the only one for me, the only one I’ve ever wanted and known so since I was six years old?

How do I explain racial memories…of baking bread, of delivering lambs, of tending a garden, sitting at my spinning wheel, knitting…so many things that are simply right for me and this life; knowing God has given me this gift, this desire of my heart…this Thistle Cove Farm. Knowing I am living the life He designed for me; having spent bitter tears in years wasted, years the locust had taken but seeing His promise delivered to me. He has given me the years the locast has taken, He has added life to my years, He has blessed me beyond my deserving and all He asks is my miserable life in return.
We both think we’ve gotten the better end of the deal and we’re both right.
Bless God. Bless His holy name.
Share
Pin
Email
« Winter Cold
Farm life…and death »