When we moved to Thistle Cove Farm, it wasn’t officially named. It was called by the nam 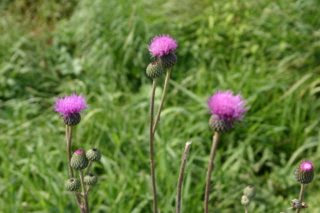 e of the carpetbaggers who moved here after the War(Any Southerner worth their salt knows which War) whose name was “White”. The White family bought a two-story brick house and stable, barns and other outbuildings for $300, the sum due to the county for back taxes. The White’s owned this farm, including a few hundred to a thousand acres, until 1948 when a man named Gillespie bought it. I don’t know how much he paid for it but, over time, the acreage was sold off until just the homestead and 28 acres were left. That’s what we bought in 1995.

Names are important and powerful, as are words. I try to be careful, some times more than others, on the words I use and how I use them. I believe, against what some call “reasonable doubt” that everything already has a name but I have to figure it out. All the animals here have names that are specific to them; they also have nicknames specific to each animal. Naming the farm was no small deed.
Dave and I worked on it for a couple of months and had many names we liked but didn’t ring true. Until “Thistle Cove Farm” came to mind. We had a bodacious crop of thistles, we’re in the toe of the Cove and it’s a farm…bingo! It fit then and still does and we love both the name and the farm.
People have told me it “sounds like a fairy farm”, “it sounds warm and cozy”, “I want your life” and they do want my life…in the summer.
When I talk about chores in winter, my life becomes less appealing. Breaking ice and carrying water are hard tasks but necessary for the survival of the animals. Right now, Lightly has a mild case of founder; she’s such an easy keeper it’s hard to keep weight off her. Like humans, the more weight, the more health problems so she’s in a “short dry lot”…all of which means she’s getting a smidgen of hay each day and all the fresh, cool water she can drink. The thought is if she drinks a lot of water, she’ll flush the toxins from her system. Please God, let this be so!
When chores allow me to return to the house, I settle in with knitting a purple wool tri-shawl. It’s the basic dishcloth shawl but with some extras thrown in to make/keep it interesting. I enjoy simple design work but it has to be something I can pick up and put down easily enough. On a farm, emergencies seem to crop up frequently and randomly so knitting, sewing and other hand work need to be kept simple.
My Turning Twenty quilts are coming along nicely. I’m sewing strips of squares together today and have the backings and battings for both. By Thursday night’s Quilting Bee, I hope to have everything ready to be pieced together so we can meld top, batting and bottom together.
I’ve been reading the biography of Norman Vincent Peale and enjoying it greatly. He was such a positive man and had a huge impact for good and God during his long life. I’m also reading Mason Dixon knitting and getting some good design ideas bouncing around.
The weather is cold, windy, snowy, icy – a good day for staying inside warm and cozy; a pot of soup sound like just the thing to round out the day.
Share
Pin
Email
« Quilting and Sewing Machines
Winter Cold »