Fiber Femmes November/December 2006 issue is now on-line with interesting articles, fabulous photos, great reviews and loads of fun!
SAFF has come and gone. Southeastern Animal Fiber Fair is the only fiber festival in the southeastern region of the USA and it’s the last one in October. SAFF has grown quite a bit since the Winston-Salem, NC days and it now boasts a fine collection of vendors as well as some excellent contests and a great place for folks to show their animals. It’s small enough so one can easily get around to visit every vendor and, if one hasn’t dawdled too much, another trip can be made before day’s end. Even so, more than 5,000 people visited this year and plans for 2007 are already in the making.

Fiber Femmes sponsored the Skein Competition this year and there were many lovely skeins of hand spun yarn on display. 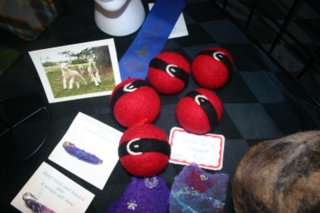 Felter’s Guild had a booth and several people demonstrated wet and needle felting. Some members had wonderful felted items for sale and display. Cynthia Mollenkopf had felted Santa’s britches…very cute!

Leslie, of Greenberry House, Chris of Wooly Buns, and Linda of Goin’ Up Cripple Creek and I had a delightful visit at SAFF and are already planning for our 2007 meet-up. Next year, we’d like to rent a house and have a huge p.j. party; that would be icing on the cake! I was reminded of elementary school when we would “show and tell” but this time the “show and tell” were fiber purchases and we each were winners.

Leslie, on right, and Chris at the *beginning* of SAFF…this taken just a short while after they arrived! Those gals looked TOO tired but it had been an exhausting drive from Meadows of 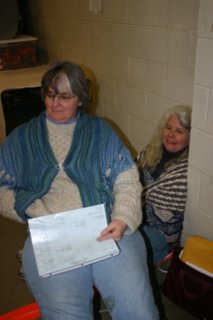 Dan. They reported it rained buckets all the way but it was a safe drive and that’s a blessing.

I visited with the gang from Columbia, SC and while they knitted, I plopped. I was exhausted from teaching “How To Increase Farm Income” so I just enjoyed their company and caught 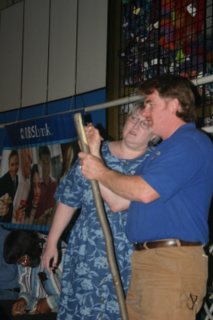 up with their lives. Millie, knitter extraordinaire, took a “spirit woodworking” class and started carving a walking stick. The best news…Nancy is recovering from cancer and looks great!

It’s finally getting cooler at Thistle Cove Farm and I’m getting caught up on winter prep chores.
Linda and I are getting together to do some natural dyeing. I’ve got walnuts, Osage Orange sawdust and fruit, fungi and I need to get some sumac fruit. Linda is my apprentice for the Virginia Folklife Program; I’m teaching Traditional Fiber Arts, and we’ve several visits planned over the course of a year.

Life is always good on the farm and each season brings a joy of its own. Life is cyclical and revolves around the seasons and the animals. The sheep are growing some mighty fine fleeces and I’m looking forward to making felted chair pads from some of the 2006 clip. I’m doing some charity knitting – Red Scarf project comes to mind – and enjoying the time allotted to me.

Mom called last night and Mrs. C. passed away. She was a lovely woman, 94 years old, and every time I saw her she had thankfulness in her heart and praise on her lips. She was always looking forward to “going Home” but enjoyed her earthly days as well. I saw her two Sunday’s ago and she told me of God’s goodness in her life and exhorted me to “keep the faith”. I’m sure that today there was shouting and rejoicing in Heaven the likes of which haven’t been seen for a while. She was a blessing in my life and my life was richer for having known her.

The other thing I think of was what she told me at church one Sunday. She had gotten sick and had to go live in Maryland for a short while…just until she recovered and could return home. She lived at home until a few days ago when she became ill and had to go to hospital. She was praising God for getting sick and having to go to Maryland. She said, “Why, I never would have gone to Maryland on my own so God sent me there. He knew those people in that home needed to hear about Him so he sent me. Isn’t that wonderful?!”

What a lesson…always be ready and always be thankful. Mrs. C., you and Aunt Bonnie and Uncle Clarence and Grandfather Lipscomb save a seat for me. Sooner or later, I’ll be coming on home.