We’ve reached and passed the Summer mark for 2006…the longest day of the year, the day with the most sunlight (if you didn’t have rain that is…) and it’s all “downhill” from here.

How is it the most wonderful day of the year brings the most sadness?

Farm folks live by a seasonal calendar and not by a monthly calendar. If the weather is good and the hay needs to be cut…we cut hay. We’ve been known to have 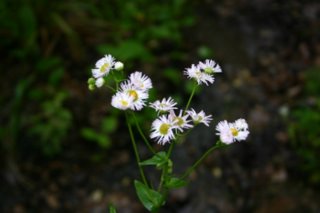 frost every month save August and this year has been very cool and wet. A really good month for most growing things, especially weeds and wild flowers, but it’s been a little dicey figuring out when to cut hay.

Blackberry Winter was late this year; very late and very, very cool. That means a good blackberry season though and Daddy and Mother report a gallon can be picked in twenty minutes. If one wants to move more quickly in this heat (surely not!), a gallon can be picked in even shorter time. They live in central VA and their season is a couple of weeks behind us. They should have more blackberries than they can use by end of July. Daddy has a beautiful garden and orchard and raises all manner of vegetables and fruits. My vegetables aren’t doing as well…it’s been too cool at night so I’m hopeful with the increased heat of summer, the garden will catch up.

I’ve missed a couple of appointments due to farm conflicts. As noted, we sheared sheep and they are happy campers all. Even the older sheep (and there’s more than a few oldsters!) have been witnessed cavorting and leaping in the pasture like lambs. Everyone is elated to be rid of their winter coats and, even so, are still panting like dogs in the heat.

Today, the Sabbath, sees everyone quiet and calm. We’ve already had several storms and more are expected today and the rest of the week. It’s good for the hay field and I can see a daily difference in the increased growth.

Today is a day of rest, relaxation and recreation, a time for reflection. Just a few short weeks ago, Daddy, Mother and I met at the West Virginia cabin and enjoyed the company of friends and relatives. I love going to the cabin; it’s on a road that was paved several short years ago and it’s only been in the last six or eight years telephone service went from party to private line. Electricity has been extended up the river and now almost everyone boasts electric lights instead of camp fires and candle light or flash light only.

The view from Steve’s front porch: 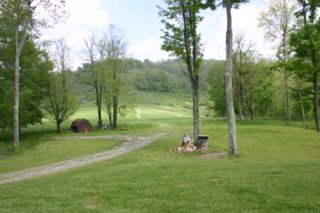 We visited my brother’s farm in Randolph County and it’s a beauty! I’m so proud of Steve and his accomplishments…he’s a gifted person and hard worker and anything he puts his hand to is successful. This old fence forms the property line between two farms. 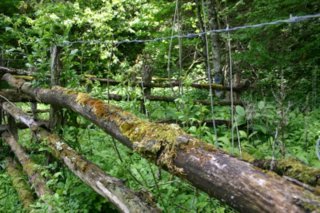 Daddy’s family is Bennett and Hamrick but they married with the Mills over on Mills Mountain. 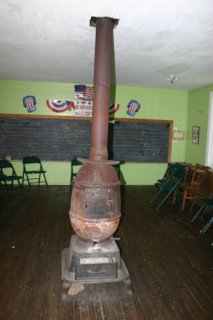 We decided to visit the old school house (pot belly stove and inside of the one room school house above), church and graveyard. It was an hour’s drive, across several mountains, just to get to the forty minute drive on a dirt road, across a couple more mountains so we could pay our respects. 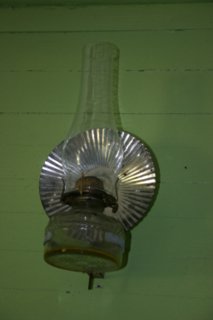 They had no electricity no Mills Mountain and lighting was provided by oil lamps hung high on walls. 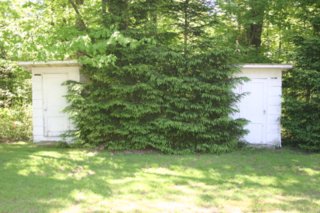 They did have a girls/women/ladies and boys/men/gentlemen bathrooms but visitors didn’t tary in the winter and had to remember to check for snakes in the warmer months.

These facilities serviced the church also so I guess some male child was given “snake duty” upon first arriving for services.

Washing up was done at the pump, just outside the school house and a respectable distance from the outhouse. Having many years of p 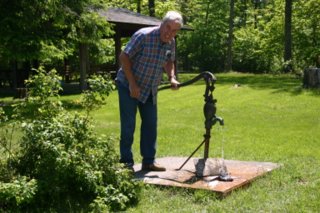 ractice, Daddy grabbed the pump handle and started pumping away. In just a very few seconds, cold refreshing mountain water sprung from the “tap”. It taste a lot like iron and a bit like sulfer as does most of the water in this central part of Appalachia. No priming was required of the pump which surprised me. 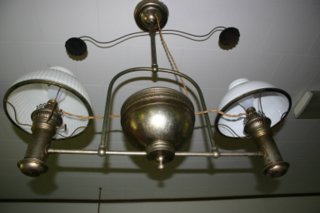 We visited the church, next door, where the original lighting is still being used (although now electrified) as are a lot of the other furnishings, including this beautiful print of the Lord’s Supper still in its original frame. 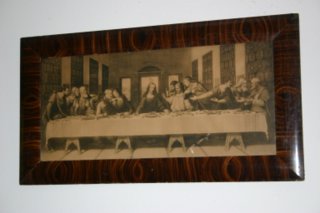 Further down the road was the cemetery where family lore has it Daddy’s Grandfather is buried. Mountain people were, by necessity perhaps?, hard people and Grand-Daddy, Ernest Ray Bennett was put out on his own at age eleven to make his way in the world. It’s easy to judge, especially from a distance, but in the late 1800’s Appalachian times and people were hard and tough. Being cast into a frosty world at such a tender age didn’t dampen Grand-Daddy’s spirit and he’s remember as a kind and gentle man who, although small in statue and short in frame, stood as a giant among men.

There are dozens, if not hundreds, of people who got their start in life due to the encouragement and generosity of Ernest Ray Bennett. One of the largest landowners in West Virginia, now owning more than 100,000 acres, got his start with a $1,000 loan from Grand-Daddy. God only knows what that $1,000 represented to Grand-Daddy, him with a family of thirteen children and whoever else needing a bed to sleep in and a hot meal.

The cemetery is full of now un-marked graves. Time and the elements have worn away the hand chiseled names and dates. Like Daddy always tells me, “Mother Nature and Father Time will make dust of us all.” 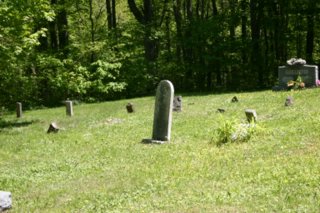 We visited on Decoration Day and, even in that remote corner of the Appalachian Mountains, people remembered. Flowers and flags decorated graves of those fallen in war, children who didn’t get a chance to suckle and those living a long life and dying a natural death.

My favorite though are the wild honeysuckle, mountain laurel and rhododendron planted by people who have, in all liklihood, gone on before. Those who knew that time erases all memory and yet by planting the wild flowers ensured those silent sentinels would stand the test of time. While those of us left behind on earth might forget, God in His heaven would forget only when the East stops meeting the West.

Angels, and a great cloud of witnesses, stand rejoicing, waiting on us all. 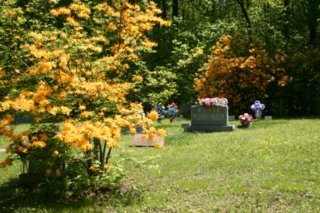 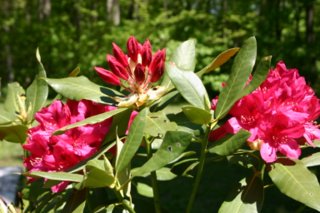